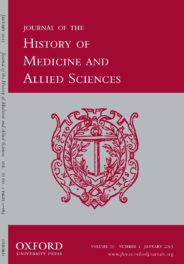 Journal of the History of Medicine and Allied Sciences

Started in 1946, the Journal of the History of Medicine and Allied Sciences is internationally recognized as one of the top publications in its field. The journal's coverage is broad, publishing the latest original research on the written beginnings of medicine in all its aspects. When possible and appropriate, it focuses on what practitioners of the healing arts did or taught, and how their peers, as well as patients, received and interpreted their efforts.

In 1999, the human genome project declared race a biological fiction with no basis in the genetic code. Despite this position, many physicians and medical scientists continue to use race in genetic studies, drug tests, and general practice. Since racial medicine persists, the question emerges: what’s the historical relationship between the medical profession and race? When did the medical profession begin to define racial difference, and can understanding this history lead to a more “race” conscious and sensitive medical profession?

Throughout the eighteenth century, physicians and scientists in Europe and the United States discussed and attempted to define racial difference. In the 1790s, however, Benjamin Rush, a founding father and early medical professor at the University of Pennsylvania, introduced racial difference into the curriculum of US medical schools. Rush taught his students that blackness was a form of leprosy that physicians would learn to cure eventually. By constructing a national future free of black Americans, Rush defined the country’s destiny as all white. Thus, within a few decades after the founding of the United States’ first medical school, physicians began to carve out their position as experts on racial difference.

Despite a belief that physicians would eliminate black skin color, Rush and many other doctors considered white and black people as essentially the same animal. This wasn’t true of physicians in the decades immediately preceding the American Civil War. By this point, many doctors and scientists subscribed to the theory of polygenesis—that God created each human race as a separate species and healthier in their “native” climates and geographies. These physicians argued that African Americans thrived on the plantation and among the diseases of tropical climates.

In an 1857 essay, physician and racial scientist Josiah Nott argued that to properly treat plantation ailments, medical practitioners must understand the natural relationship between African Americans’ bodies and southern, malarial climates. First, Nott claimed that African Americans had an immense tolerance to heat compared to whites. He stated that in Africa, the natives “can lie down and sleep on the ground in a temperature of at least 150 of Fahrenheit, where the white man would die in a few hours.” Second, Nott believed that African Americans were immune to the worst diseases of tropical climates such as malaria and yellow fever, a position medical students in the US North and the South shared with Nott. While contemporary scientists have shown that the Duffy antigen and sickle-cell trait provide protection against certain strains of malaria, there is no scientific evidence to support the notion of inherited immunity to yellow fever. In their depiction of non-whites as suited for hard labor and toil on southern plantations, physicians such as Nott supplied a vital argument for the moral rectitude of slavery.

Medical theories such as those espoused by Nott lead physicians to treat African Americans differently than white patients. Antebellum medical students studying in the North and the South agreed that African Americans required less blood-letting than whites, an unintentional benefit of antebellum medical racism. While Josiah Nott studied medicine at the University of Pennsylvania in the 1820s, Professor Nathaniel Chapman taught him that black patients could not bear blood-letting. In short, as much as Nott was a product of the slave South, he also learned racial-bias from his medical training.

As opposed to the well-known histories of the Tuskegee Syphilis experiments and Nazi eugenics that emphasize exceptional episodes in the history of medicine, an examination of early racial medicine and its infestation of medical schools draws attention to many unexceptional and largely unquestioned aspects of race in medical practice. While most physicians decry the torturous  experiments conducted by the Nazis, far less awareness exists of how medicine has seen race as biological for centuries.

In some respects, the debates over race and health in early America aren’t so different from those being had by medical professionals in the present. Are health discrepancies being caused by the social determinants of health such as poverty and even the mental stress of experiencing racism or are these discrepancies inherited? While inheritance and genetics undoubtedly contribute to human health outcomes, it’s important to recognize that inheritance doesn’t follow along the human-imagined racial barriers tied to skin color. Peoples of different skin colors from around the Mediterranean and West Africa possess the sickle-cell trait. Likewise, increased rates of hypertension among African Americans don’t derive from race-based inheritance, as increased rates aren’t experienced among Afro-Caribbeans or West Africans. In short, examining the origins and the present of racial medicine works to highlight the fatal flaws of this brand of medical thinking. Lines of inheritance and genetics don’t obey the color lines created socially, and the history of racial medicine draws attention to a long pattern of misunderstanding how racist medicine often creates the negative health outcomes that it claims to explain.

Christopher Willoughby (PhD, Tulane University, 2016) is a historian of American medicine and Atlantic slavery, and he is a postdoctoral fellow at the Bill and Carol Fox Center for Humanistic Inquiry at Emory University. In 2017, he is the author of "'His Native, Hot Country': Racial Science and Environment in Antebellum Medical Thought," recently published in the  Journal of the History of Medicine and Allied Sciences. Currently, he is writing a book manuscript entitled “Masters of Health: Racial Science and Slavery in American Medical Schools.”

1. "Any opinions, findings, and conclusions or recommendations expressed in this material are those of the author(s) and do not necessarily reflect the views of the National Science Foundation."

2. "This material is based upon work supported by the National Science Foundation under grant number 1353086."