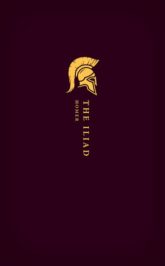 The Iliad tells the story of Achilles’ anger, but also encompasses, within its narrow focus, the whole of the Trojan War. The title promises “a poem about Ilium” (i.e. Troy), and the poem lives up to that description. The first books recapitulate the origins and early stages of the Trojan War. The quarrel over Briseïs mirrors the original cause of the war, for it too is a fight between two men over one woman. The Catalogue of Ships in book 2 acts as a reminder of the expedition; book 3 introduces Helen and her two husbands; book 4 dramatizes how a private quarrel over a woman can become a war; in book 5 the fighting escalates; and book 6 takes us into the city of Troy. The narrative now looks forward to the time when the Achaeans will capture the city: it anticipates the end of the poem, and of the war itself. The bulk of the Iliad is devoted to the fighting on the battlefield. It describes only a few days of war, but the sheer scale of the narrative, and its relentless succession of deaths, come to represent the whole war.

The poet is specific about the horrors of the battlefield: wounds, for example, are described in precise and painful detail. At 13.567–9 Meriones pursues Adamas and stabs him “between the genitals and navel, in the place where battle-death comes most painfully to wretched mortals.” At 15.489–500 Peneleos thrusts his spear through Ilioneus’ eye-socket, then cuts off his head and brandishes it aloft. At 20.469–1 Tros tries to touch Achilles’ knees in supplication, but Achilles stabs him

No Hollywood version of the Iliad is as graphic as the poem itself. Descriptions of the physical impact of war are matched by an unflinching psychological account of those who fight in it. Homer shows exactly what it takes to step forward in the first line of battle, towards the spear of the enemy. He describes the adrenaline, the social conditioning, the self-delusion required. And the shame of failure, which is worse than death.

The truth and vividness of the Iliad have struck many readers. In her towering exploration of violence, Simone Weil, for example, calls the Iliad “the most flawless of mirrors,” because it shows how war “makes the human being a thing quite literally, that is, a dead body. The Iliad never tires of showing that tableau.” Weil was writing in 1939: her L’Iliade ou le poème de la force did not just describe the Trojan War; it anticipated the Second World War, and prophesied how it would again turn people into things. Just like Weil, women inside the Iliad make powerful statements against violence—and even against the courage of their own men. Hector’s wife Andromache, for example, tells him that his own prowess will kill him, and that he will make her a widow (6.431–2). When confronted with his wife’s words, Hector claims he would rather die on the battlefield than witness her suffering (6.464–5). He then tries to console her in the only way he knows: by imagining more wars. He picks up his baby son and prays that he may be stronger than him and, one day, bring home the spoils of the enemy, so that his mother may rejoice (6.476–81). This is how the poet Michael Longley, in the context of the Troubles in Northern Ireland, paraphrases Hector’s prayer: he “kissed the babbie and dandled him in his arms and | prayed that his son might grow up bloodier than him.”

The Trojan War, the Second World War, the Troubles: the Iliad is intertwined with all stories about all wars. Already in antiquity it was part of a wider tradition of poetry, which found its inspiration in the ruins of a Bronze Age city, well visible on the coast of Asia Minor. The Iliad often refers to that wider tradition. For example, when Hector picks up his baby and dandles him in his arms, his gesture recalls that of an enemy soldier who will soon pick up the little boy—and throw him off the walls of Troy. Other early poems described the death of Astyanax in a manner that clearly recalled his last meeting with his father. Some stories about the fall of Troy were known to the poet of the Iliad and his earliest audiences; others were inspired by it. As a result, the Iliad became more allusive and complex in the course of time. This is how Zachary Mason describes the situation in a recent novel inspired by Homer:

It is not widely understood that the epics attributed to Homer were in fact written by the gods before the Trojan war—these divine books are the archetypes of that war rather than its history. In fact, there have been innumerable Trojan wars, each played out according to an evolving aesthetic, each representing a fresh attempt at bringing the terror of battle into line with the lucidity of the authorial intent. Inevitably, each particular war is a distortion of its antecedent, an image in a warped hall of mirrors.

Mirrors and distorted mirrors: what readers ask of the Iliad is whether things can be different. Whether we must imagine wars and more wars, like Hector when he prays for his son, or whether there can perhaps be peace—and even a poetics of peace. This is, for example, the insistent question of the poet Peter Handke in his explorations of the cold war, clear answer, only fleeting im ages of peace in the form of distant memories, startling comparisons, and doomed aspirations. Hector runs past the place where the Trojan women used to wash their clothes before the war (22.153–9). Andromache wishes Hector had died in his own bed (24.743–5). Athena deflects an arrow like a mother brushing away a fly from her sleeping baby (4.129–33). On the shield of Achilles—which is a representation of the whole world—there is a city at war, but there is also a city at peace. There is a wedding, and the vintage, and a row of boys and girls dancing to music (18.478–608). These images are precious, because they are so very rare.

Anthony Verity is a classical scholar and educationalist whose appointments include Head of Classics at Bristol Grammar School, Headmaster of Leeds Grammar School, and Master of Dulwich College from 1986 to 1995. His translations for Oxford World's Classics include Theocritus' Idylls, Pindar's The Complete Odes, and Homer's The Odyssey.

Barbara Graziosi's research focuses on ancient Greek literature and its readers, both ancient and modern. Her books include Inventing Homer: The Early Reception of Epic, Homer: The Resonance of Epic, Homer in the Twentieth Century: Between World Literature and the Western Canon, The Oxford Handbook of Hellenic Studies, a commentary on Iliad 6, co-written with Johannes Haubold, and The Gods of Olympus: A History (Profile, 2014). Forthcoming books include Homer: A Very Short Introduction.