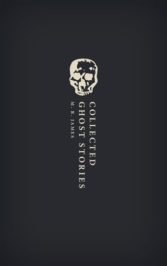 In the following excerpt from Collected Ghost Stories by M. R. James, Darryl Jones discusses how the limitations of James’s personal, social, and intellectual horizons account for the brilliance of his ghost stories.

“The potential that ideas have for opening up new worlds of possibility caused James lifelong anxiety. Thus, his research, phenomenal as it was, tended habitually towards apocrypha, ephemera, marginalia —towards forgotten and perhaps deliberately irrelevant subjects. James was happy to acknowledge this himself. As a schoolboy, his autobiography records, he became fascinated by ‘blobs of misplaced erudition. . . . Nothing could be more inspiriting than to discover that St Livinus had his tongue cut out and was beheaded, or that David’s mother was called Nitzeneth.’ In 1883, the first paper James delivered to the Chitchat Society in Cambridge (to whom he first read a number of his important early stories) was entitled ‘Useless Knowledge’. Amongst the very greatest of his scholarly achievements is his 1924 Oxford edition of The Apocryphal New Testament, a collection of marginal or excluded scriptural texts whose intrinsic worth, James admitted, was highly dubious. The irresistible pull of the irrelevant for James was frequently remarked upon by his colleagues and contemporaries. His revered tutor at Eton, H. E. Luxmoore, noted the way in which James ‘dredges up literature for refuse’; Edmund Gosse, the great Edwardian man of letters, and lecturer in English at Trinity College Cambridge, remarked on ‘those poor old doggrell-mongers of the third century on whom you expend (notice! I don’t say waste) what was meant for mankind’; A. C. Benson believed that ‘no one alive knows so much or so little worth knowing’.

But it is the very limitations of James’s personal, social, and intellectual horizons that account for the brilliance of his ghost stories. The great effect and power of James’s stories lies in their acts of exclusion, the ways in which they use scholarship, knowledge, institutions, the past, as a rearguard action to keep at bay progress, modernity, the Shock of the New. They are straitened, narrow, austere, limited. And it is precisely this lack of expansiveness that makes him a great short story writer, and the very greatest ghost story writer, as these limitations become narrative preoccupations, simultaneously obsessions and games. The ghost story tends to be a highly conventional, formalized, conservative form, governed by strict generic codes, which often themselves, as with James, reflect and articulate an ingrained social conservatism, an attempt to repulse the contemporary world, or to show the dire consequences of a lack of understanding of, and due reverence for, the past, its knowledge and traditions. These traditions, when violated or subjected to the materialist gaze of modernity, can wreak terrifying retribution.

The nearest James ever came to a statement of theoretical principle about his chosen form—albeit one couched in a characteristic reluctance towards abstraction—was in the introduction he wrote to V. H. Collins’s anthology Ghosts and Marvels, published in 1924:

Often have I been asked to formulate my views about ghost stories and tales of the marvellous, the mysterious, the supernatural. Never have I been able to find out whether I had any views that could be formulated. The truth is, I suspect, that the genre is too small to bear the imposition of far-reaching principles. Widen the question, and ask what governs the construction of short stories in general, and a great deal might be said, and has been said. . . . The ghost story is, at its best, only a particular sort of short story, and is subject to the same broad rules as the whole mass of them. These rules, I imagine, no writer ever consciously follows. In fact, it is absurd to talk of them as rules; they are qualities which have been observed to accompany success. . . . Well then: two ingredients most valuable in the concocting of a ghost story are, to me, the atmosphere and the nicely-managed crescendo. (Appendix, p. 407)

It is a very revealing essay, not least because of its typically self-denying nature: can the ghost story be theorized, or not? The short story has ‘broad rules’, but ‘no writer ever consciously follows’ them. The ghost story also properly belongs in the past—not necessarily the distant past; but it is important that its setting and concerns be at least a generation out of date, in a world which pre-dates technological modernity:

The detective story cannot be too much up-to-date: the motor, the telephone, the aeroplane, the newest slang, are all in place there. For the ghost story a slight haze of distance is desirable. ‘Thirty years ago,’ ‘Not long before the war,’ are very proper openings. (pp. 407–8)” (xvi-xviii).