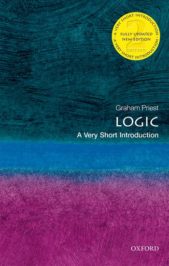 Who was the greatest paradoxer in Ancient Western Philosophy? If one were to ask this question of a person who knows something of the history of logic and philosophy, they would probably say Zeno of Elea (c. 490-460 BCE). (If one were to ask the same question about Ancient Eastern Philosophy, the person might well say Hui Shi (c. 370-310 BCE). However, my story here is about the Western side of the Euphrates.)

According to Plato in the Parmenides, Zeno wrote a book in defence of Parmenides, containing many paradoxical arguments. Sadly, most of these paradoxes have not survived, with one notable exception: the famous paradoxes of motion, reported to us by Aristotle. With arguments such as Achilles and the Tortoise, and the Arrow, Zeno argued that motion was impossible. Zeno’s arguments have been much discussed through the history of Western philosophy, and — arguably — were finally laid to rest thanks to developments in mathematics in the 19th Century.

However, for my money, the answer would be wrong. The greatest paradoxer is not Zeno, but the Megarian philosopher Eubulides of Miletus (fl. 4c BCE). Again, nothing he may have written has survived; but fortunately we have commentators such as Diogenes Laertius who report his arguments. Eubulides is reputed to have invented seven paradoxes. Some of these seem to be variations of others, so that what we have is essentially four different paradoxes.

Most philosophers would now regard this as a simple sophism. Indeed, it is a standard fallacy, often called the ‘fallacy of many questions.’ To say that you have or have not lost something would normally presuppose that you had it to lose in the first place. So if you never had horns, the two premises both have false presuppositions. Whether that makes the premises themselves simply false, or neither true nor false, one might still argue about; but at least they are not true.

This one of Eubulides’ paradoxes is not, then, profound. However, the other three are a quite different matter.

The most famous of the paradoxes is the Liar Paradox: someone says ‘what I am now saying is false.’ Is this true or false? If it is true, it is false; and if it is false, it is true. So it is both true and false.

The paradox and its variations were discussed by Ancient philosophers, and have been subject to much discussion in both Medieval and modern logic. Indeed, those who have engaged with them in the 20th Century reads rather like a roll call of famous logicians of that period. But despite this attention, there is still no consensus as to how to solve such paradoxes. Solutions are legion; but the only thing that is generally agreed upon, is that all of them are problematic.

This is a paradox of intentionality. Intentionality is a property of mental states that are directed towards some object or other — such as the hooded man. The topic of intentionality and its paradoxes was also discussed by Ancient and Medieval philosophers. However, in the 20th century, some influential logicians (such as W. V. O. Quine) dismissed intentional notions entirely as incoherent, largely because of this sort of problem. This is no longer the case, and various theories of intentionality have now been proposed. However, I think it is fair to say that there is still no general consensus as to how, exactly, to solve this sort of paradox.

The Greek for heap is soros. Hence, paradoxes of this kind are called Sorites paradoxes. Such paradoxes concern predicates that are vague in a certain sense, like ‘heap’, ‘drunk’, ‘child’, where very small changes do not affect their applicability. Indeed, virtually all of the predicates one commonly uses are like this. These paradoxes, too, have an interesting history. There was some discussion in Ancient philosophy; none whatsoever in Medieval logic (that I am aware of, anyway); and virtually none in modern logic until the 1960s, when the topic took off spectacularly. (Why this should have happened so suddenly after 2,000 years, I have no idea.) Since then, a very large number of solutions have been proposed. But, again, there is no consensus as to how to solve paradoxes of this kind. All proposed solutions face very obvious problems. Crucially, they all seem to impute more precision to matters than there really is.

What my story tells, then, is that Eubulides invented three profound logical puzzles. The puzzles problematise three very different, but very important, philosophical notions: truth, intentionality, and predication. And despite an enormous amount of effort by logicians over the last two and a half thousand years, there is still no agreed-upon solution to any of them. This is why I say, that of Zeno and Eubulides, it is Eubulides who is the greater paradoxer.

This may well not have been how Eubulides was seen in his own day, however. Diogenes Laertius reports that one of the comic poets of the time wrote: ‘Eubulides the Eristic, who propounded his quibbles about horns and confounded the orators with falsely pretentious arguments, is gone with all the braggadocio of a Demosthenes.’ Well, Eubulides himself may have gone, but his paradoxes remain to haunt us.

Graham Priest is Distinguished Professor of Philosophy at the CUNY Graduate Center, as well as a regular visitor at the University of Melbourne (where he was Boyce Gibson Professor of Philosophy). His books include Doubt Truth to be a Liar (OUP, 2008), One (OUP, 2014), Towards Non-Being (2nd ed. OUP, 2016), and Logic: A Very Short Introduction (OUP, 2017).