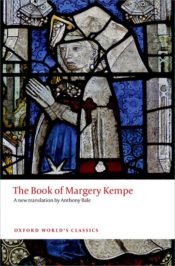 The Book of Margery Kempe

After a period of chastity, Margery Kempe’s husband described one of those hypothetical scenarios that couples sometimes use to test each other. “Margery, if a man came with a sword and wanted to chop off my head unless I had sexual intercourse with you as I used to before, […] [would you] allow my head to be chopped off, or else allow me to have sex with you as I previously did?” When pressed to answer, Margery finally told him she would “rather see [him] slain than that [they] should return to [their] uncleanliness.” Did that make her a bad wife, as her husband initially complained, or a devout Christian, as she believed?

The fifteenth-century English mystic Margery Kempe has divided opinions for centuries. For supporters, Kempe’s earnest spiritual struggles, vivid visions, and difficult journey to grace were laudable and inspiring. For opponents, her loud expressions of faith seemed fake and showy, her constant talk of—and with—God was annoying at best and potentially heretical at worst, and her independence and seemingly unwomanly behavior were problematic. Both sides agreed that she was uncommonly persistent in trying to live her life on her own terms. Since the rediscovery of the account of her life in the 1930s, modern scholars and readers have variously suggested that Kempe was a significant example of late medieval religiosity, a proto-feminist, a mentally ill hysteric, or a woman suffering from post-partum depression and menopausal symptoms. In any case, Kempe was, and still is, a difficult woman to ignore, and the autobiographical The Book of Margery Kempe, originally written in the 1430s, provides a fascinating view into both the spiritual and profane world that she inhabited.

Margery Burnham was born in King’s Lynn, Norfolk, sometime around 1375. She came from a prominent merchant family. She married John Kempe, a man from another family of means, and she quickly became a mother. The Book of Margery Kempe tells us that young Kempe was vain, loving to show off beautiful clothes, and that she was unsatisfied by her husband’s lack of business acumen. She tried her hand at business herself, unsuccessfully. She also enjoyed sex—too much so, she later thought, as she strove to live a chaste life. After the birth of her first child, Kempe suffered from a severe illness for several months, which caused her to lose her wits temporarily. She encountered devils and demons, who tried to convince her to kill herself. The turnaround came when she had her first vision of Christ, who told her that he had not forsaken her and that she should have faith. Thus began Kempe’s lengthy and complex spiritual journey.

After multiple periods of religious fervor and backsliding, and what must have been close to two decades of child bearing, Kempe managed to convince her reluctant husband to have a chaste marriage, since she wanted to be a virgin, married to Christ. This practice caused snickers among some of her detractors: how could a married mother possibly think of herself as a virgin? In her visions, Christ also told her that she should go on pilgrimages. Kempe travelled far and wide, to some of the most prominent cities of the time. At first, her husband accompanied her on English journeys to Norwich, Canterbury, York, and London. She then travelled without him to Jerusalem, Rome, Assisi, Bologna, Venice, Constance, Santiago, and Aachen. She suffered great hardships on her travels. While in Jerusalem, she experienced her first bout of loud, uncontrollable crying that would become one of her hallmarks. These ecstatic episodes caused her both exquisite pain and pleasure and made her writhe and wail so loudly that those around her sometimes feared she was dying. Her travelling companions at the time, already finding her bothersome, did not want to be associated with her at all after these episodes, whereas others who witnessed it believed she was genuinely moved by the Holy Spirit. Kempe experienced these crying bouts for the rest of her life. She died at some point after 1439, having outlived another famous mystic across the English Channel, Jeanne d’Arc.

The many paradoxes of Kempe’s life make her especially fascinating. At the same time as she strove to be a humble Christian, she also proudly highlighted instances when others found her wonderful, or when she bested learned priests and monks in theological discussions. She was relentlessly worried about her own sin, but also quick to point out the sins of others. She argued that she was glad to suffer hardships and humiliations for Christ, at the same time as she bitterly noted how others mistreated her. Both her strengths and her foibles come across as profoundly human, and it is certainly rare to have such insight into the mind of a fifteenth-century woman.

The fact that Kempe was a woman has always been the central focus of her detractors, both medieval and modern alike, although the reasons have shifted. Some of her contemporaries believed she was a bad wife: she should take care of her husband and their household, rather than focus excessively on devotion. Kempe responded that she always acted with her husband’s permission, and that serving Christ was in any case more important than any worldly concerns. To modern readers, who often admire her determination and independence from her husband and other men, it is her almost complete silence about her children that seems odd and disturbing. Was Kempe a bad mother? She gave birth to fourteen children, and yet, apart from their conception serving as reminders of her sinful concupiscence, she does not mention them at all in the autobiography. If Kempe were male, modern readers would in all likelihood not be as concerned about the lack of mention of children in an account of a spiritual life, since we are so used to seeing men’s spiritual, intellectual, and professional lives separated from their family life. In the twenty-first century, Kempe’s loud spirituality still confounds and inspires, serving as a mirror of our own ideals, desires, and struggles.

Join us in NYC’s Bryant Park at 12:30 tomorrow, July 25th, for a discussion on the Oxford World’s Classics edition of The Book of Margery Kempe led by Johanna Luthman, author of Love, Madness, Scandal.

The Bryant Park Reading Room was first established in 1935 by the New York Public Library as a refuge for the thousands of unemployed New Yorkers during the Great Depression. Today, thanks to the generous support of HSBC Bank USA, and the continued efforts of the Bryant Park Corporation, the Reading Room is thriving once again. As part of the Bryant Park program, Oxford University Press has created a special book club where we pair acclaimed contemporary authors with a classic title from the Oxford World’s Classics series.

Johanna Luthman is associate professor of history at the University of North Georgia. She focuses on the history of Tudor and Stuart England, and especially on issues of love, sex, and marriage. She is the author of Love, Madness, and Scandal: The Life of Frances Coke Villiers, Viscountess Purbeck (OUP, 2017).