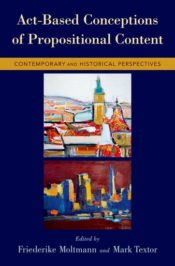 Propositional attitudes appear to involve objects. They are the things that that-clauses seem to stand for and that we make reference to when we talk about ’what John believes’, ‘what Mary hopes’ and ‘the thing Joe predicted’.

The things associated with propositional attitudes, moreover, seem to be able to be shared among different agents. John can believe, hope or predict the same thing as Mary, and John and Mary can both have the belief that Macron is president of France or make the prediction that Macron would become president of France.

While philosophers agree on what sorts of properties the things associated with propositional attitudes should have, there is great disagreement about the nature of those things. The dominant view in contemporary philosophy of language is due to the philosopher Gottlob Frege, who around 1900 argued that the things associated with propositional attitudes are abstract, mind-independent objects that come with truth conditions, abstract propositions.

But then how can we when we think, hope, or predict relate to such propositions and mentally grasp them? And how could propositions as abstract objects represent and be true or false? After all mathematical objects cannot do that.

However, the act-based approach is in fact not a new approach to propositional content. It was an equally important view pursued during Frege’s time and before, by philosophers such as Bolzano, Husserl, Reinach, Meinong, and Twardowski. It was pursued in particular in parts of Eastern Europe, for example in the city of Lvov, where Twardowski, one of the main proponents of the approach, lived and taught.  It is important and exciting to revisit that approach in view of the contemporary debate, to learn from it and to give it justice and recognition.

The paintings of Lvov and of New York on the cover of the book represent a historical and a contemporary center for the pursuit and discussion of the act-based approach to propositional content.

Friederike Moltmann is research director at the French Centre National de la Recherche Scientifique and in recent years visiting researcher at New York University. She has published extensively in both linguistics and philosophy and is author of Parts and Wholes in Semantic (OUP,1997) and Abstract Objects and the Semantics of Natural Language (OUP 2013).

How pictures can lie