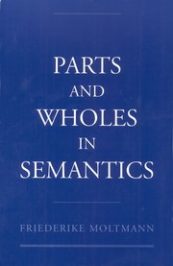 Parts and Wholes in Semantics

What makes something we see or something we talk about a single thing, or simply a unit that we can identify and that we can distinguish from others and compare to them? For ordinary objects like trees, chairs, mountains, and lakes, the answer seems obvious. We regard something as an object if it has a form, that is, a shape, a structure, or at least boundaries, and it endures through time maintaining that form (more or less). An apple is what it is as long as maintains its form. Once it is cut into small pieces it is no longer an apple, but just ‘apple’. Some objects individuated by a form may be very temporary, for example waves and clouds.

Apart from the question of the form that individuates objects, one can ask the weaker question of makes something a unit, given is presented to us, for example visually. Abstract art has addressed that question and optical art has played with our ways of perceiving something as a unit. Let us look at the paintings from the series “Alchemie” by the Argeninian op artist Julio Le Parc.

Painting 1 clearly represents a single object, if unfamiliar, with a stable structure guaranteeing the objects endurance. In painting 2, we do not see an object that we would attribute an enduring structure to, but rather just something we may call a ‘unit’, something that has some form of integrity, in virtue of the closeness of dots and a boundary separating them from the dark background. In painting 3, again, we do not see objects, but various units. In fact, we can discriminate different units, depending on what we focus on, color or distribution of dots.

What makes us see something as a unit? In the last two paintings, the units are all parts of the painting that are maximal with respect to some property shared by dots (color of dots, color of background), or a relation among them, such as being connected with respect to a minimal distance. Such conditions define something as an integrated whole.   Conditions defining an entity as an integrated whole or as having ‘gestalt’ are not always easy to make explicit, but they drive our perception in the way we individuate objects and we discriminate units in what is presented to us. Conditions of integrity help us discriminate an object or a unit, something that endures with a particular form or something that just has a form without thereby even being an object.

Language is not so different from painting. With language we can refer to objects with an enduring form, apples or houses, for example. The conditions of structure or form are generally expressed by the nouns we are using to refer to objects, more precisely by count nouns such as apple or house. But there is another important level of meaning where integrity conditions play a role, namely with complex constructions involving mass nouns and plurals. At that level, language operates in a way that is much closer to the art we just looked at. When we use mass nouns and plurals, we now longer can count on an enduring form being conveyed by the noun. Yet, we may refer to things that are divided into units, in the context of the linguistic information that goes along with the construction that is used. For example, when we refer to something as the rice, we do not differentiate between different portions of rice. However, when we refer to it as the white rice and the brown rice, we refer to it being divided into two units. Similarly, when we refer to the rice as the rice in the various dishes, we refer to the rice as being divided into as many units as there being dishes. In both cases, though, we do not refer to a plurality of objects. We do not refer to ‘two entities’, the white rice and the brown rice. The rice is never a thing and neither is the white rice or the brown rice, and the white rice and the brown rice are not two things, unlike an apple and a pear. The different ways of referring to the rice matter for the semantics of natural language, in particular the application and understanding of predicates. Thus (1a) does not sound very good, whereas (1b) is perfectly fine and has a single reading, and similarly (2a) does not sound very good, whereas (2b) is fine and has a single reading:

b. John compared the white and the brown rice.

b. John cannot distinguish the rice in the various dishes

(1b) means John compared the white rice to the brown rice, and (2b) means John cannot distinguish the rice in dish one from the rice in dish 2 and from the rice in dish 3 etc.  It is not entirely impossible to get such readings also for (1a) and (2a), but these sentences also allow for other readings, depending on what sort of division of the rice into units is relevant in the context of the discourse. By contrast, when we use the predicate count instead of compare in (1a) (John counted the rice), a reading is entirely excluded on which contextually relevant portions are being counted.

The sensitivity of predicates like to compare and distinguish to the contextual division of a portion means that such predicates do not apply to entities or portions as such, or to pluralities. Rather when they apply to something like a portion of rice, they apply to it as divided into units given the information given by the descriptive content of the construction that is used or else nonlinguistic contextually relevant information.

The same phenomena appear with plurals:

b. John compared / cannot distinguish the male student and the female students.

c. John compared the students in the different classes.

Compare applies to a plurality relative to a contextually given division into subpluralities, which is enforced by the use of a complex construction as in (3b) and (3c). Again pluralities are not single things, but they may count as units in the context.

Language also dislays unit-dissolving and unit-preventing modifiers, for example the adjectives whole, and individual in English:

(4) a. The whole collection is expensive.

b. John compared the individual students.

Whole in (4a) allows a distributive reading of expensive that would be impossible if only the count noun was used (the collection is expensive). Individual in (4b) prevents a reading on which proper subgroups are the object of comparison.

Friederike Moltmann is research director at the Centre National de la Recherche Scientifique (CNRS) in France. Her research is in philosophy and linguistic semantics and especially the interface between the two. She is author of Parts and Wholes in Semantics (OUP, 1997) and Abstract Objects and the Semantics of Natural Language (OUP 2013).