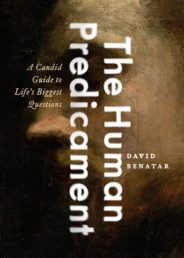 The Human Predicament: A Candid Guide to Life's Biggest Questions

Peter Ohlin: The title of the new book is The Human Predicament. How would you describe that predicament, in a nutshell?

David Benatar: Life is hard. We have to struggle, often unsuccessfully, to keep unpleasantness at bay. It would be easier to make sense of this if life served some important purpose. Yet, while we can create some meaning, our lives lack any ultimate purpose. Death can relieve our suffering, but it cannot solve our problem of meaninglessness. Moreover, because death is annihilation, it is part of our misfortune (even when, all things considered, it is the lesser of two evils). In other words, our predicament is that life is bad but that death is too.

PO: How did you become interested in this topic, and how does it connect with your previous book, Better Never to Have Been?

DB: Apprehending our predicament commands one’s interest. To be aware of the suffering, the pointlessness of it all, and the grotesque finale seems unavoidably interesting – or, at least, it is to me. Although there is no way to escape the human predicament once one is in it, there is a way in which it can be avoided, namely by never being brought into existence. Of course, it’s too late for us who exist, but because procreation involves replicating the predicament, the latter can be avoided by desisting from the former. That’s why it is better never to be or to have been.

PO: While the existentialists and some non-western traditions have addressed the topic of “the meaning of life” why do you think analytic philosophy has mostly neglected it? What value do you see in an analytic approach to these “big questions” of human life?

What the analytic approach brings to the “big questions” of human life is the quest for clarity and the rigor of argument. There is a danger that in its more stereotypic forms, this approach can answer engrossing questions in deadly boring ways. I have tried to avoid this pitfall by seeking to combine meticulous arguments and engaging writing.

PO: You oppose the idea that human life can have meaning, yet many find meaning or satisfaction in things such as religion, family and friends, career, etc. Does the satisfaction that people might find in those spheres affect your views about meaning in life?

DB: Actually I don’t think that life is devoid of any and all meaning. Our lives can have meaning as a result of their impact on other individuals, communities or, in rare cases, humanity as a whole–all forms of what we can call “terrestrial” meaning. What I deny is that life can have a more ultimate form of meaning–a “cosmic” meaning if you will. There is no broader purpose that we serve. Thus the fact that people can find some meaning in life supports rather than challenges my view. Creating or finding terrestrial meaning makes life go much less badly than it otherwise would. This does not mean, however, that everything people find meaningful is actually meaningful. For example, somebody might find praying to some deity meaningful. If, however, that deity does not exist, the praying might not actually be meaningful.

PO: What is your view of suicide and how does it differ from our conventional attitudes toward it, as somehow an immoral or self- indulgent act?

DB: Suicide is, on my view, a reasonable response to some but not other features of the human predicament. Death does not solve the problem of life’s cosmic meaninglessness and will often (but not always) diminish the kind of meaning that is attainable. Suicide is thus not typically a solution to deficiencies of meaning. By contrast, suicide can bring relief from suffering. When life becomes so bad that continued life is not in one’s overall interests, and there are no other overriding considerations, I see suicide as neither immoral nor self-indulgent, but as a reasonable response to one’s circumstances. These circumstances are not restricted to the final stages of terminal diseases. It may well be reasonable for individuals to set the threshold for a life worth continuing lower than that. However, even in such circumstances, suicide comes at a cost, both to the person who dies and to his or her family and friends, which is why, even when it is clearly reasonable, suicide remains tragic.

PO: Some readers might say your views are dark or pessimistic about life. What would you say to them, and are there aspects of human life that mitigate the predicament you describe?

DB: I agree that my views are quite grim, but that, I argue, is because the truth about these matters is deeply unpleasant. In other words, I think that my pessimism is warranted. That is not to say that there is nothing good about our situation. At least we can attain some (albeit limited) kinds of meaning in our lives, and the quality of lives could always be worse. It also does not follow from our unfortunate situation that we should constantly be morose. We should seek from life what joy, satisfaction and meaning we can (compatible with the constraints of morality). And we should laugh, for both the pleasure and the relief it brings. To that end, I have included some (sometimes delicious) humor in the book’s notes.

David Benatar is Professor of Philosophy at University of Cape Town, South Africa. He is the author of Better Never to Have Been: The Harm of Coming Into Existence (2006) and Debating Procreation: Is it Wrong to Reproduce? (2015).