A cornerstone of humanities scholarship across the world, Oxford University Press's list of scholarly editions is unparalleled in breadth and quality. Oxford Scholarly Editions Online (OSEO) provides full-text access to hundreds of editions straight to your desktop, showcasing their authoritative editorial notes directly alongside the text and enabling advanced search within and between editions.

On 27 December 1831, Charles Darwin set off on a round-the-world survey expedition and adventure on the HMS Beagle. Captained by Robert FitzRoy, the trip (the second voyage of HMS Beagle) lasted until 2 October 1836 and saw the crew visit locations as varied as Brazil, Tierra del Fuego, South Africa, New Zealand, and the Azores. Aged just 22, Darwin was a young and promising naturalist, who dreamed of seeing wondrous tropical lands before heading home and joining the church. In his own words, Darwin’s notions of the inside of a ship “were about as indefinite as those of some men on the inside of a man, viz. a large cavity containing air, water, and food mingled in hopeless confusion.” By the time he returned to England however, he was a changed man; hardened to life on water as well as explorations on land, and celebrated as a pre-eminent geologist, naturalist, and fossil collector.

Darwin’s journals were published as The Voyage of H.M.S. Beagle, winning him instant recognition. They contain a curious mix of personal anecdote, religious belief, racial typecasts, as well as historical and scientific enquiry on topics as diverse as geology, zoology, and anthropology. The diaries also demonstrate the inquisitive beginnings that formed Darwin’s famed theory of Natural Selection. Not only do they provide a fascinating insight into the man himself, but they also provide a day by day record of the ship’s route. We’ve highlighted some of Darwin’s most intriguing stops (including tropical rainforests, volcanoes, elephant rides, and Napoleon’s tomb) on the interactive map below. Explore this astounding circumnavigation for yourself, or read the full text of Darwin’s first year on the Beagle. 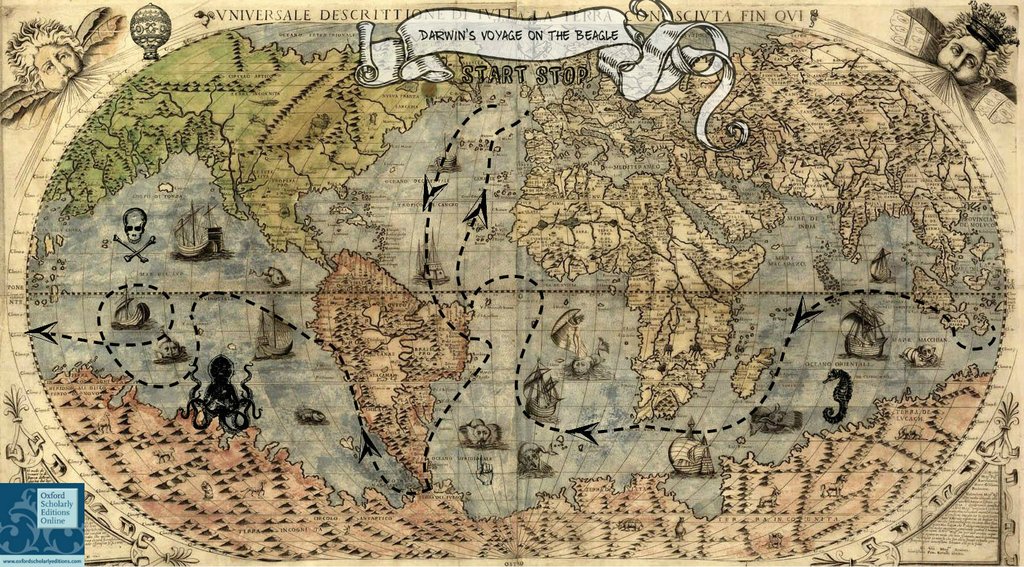 Featured and map image credit: “Map of the world from 1565,” by Paolo Forlani. Public Domain via Wikimedia Commons.

Beyond the cold fact: The WPA narratives, Brazil’s black peasants, and the conduct of oral history