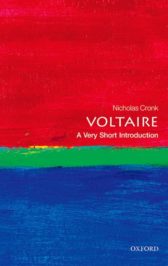 As we mark Voltaire’s 323rd birthday – though the date of 20 February is problematic, – what significance does the great Enlightenment writer have for us now? If I had to be very very short, I’d say that Voltaire lives on as a master of the one-liner. He presents us with a paradox. Voltaire wrote a huge amount – the definitive edition of his Complete works being produced by the Voltaire Foundation in Oxford will soon be finished, in around 200 volumes. And yet he is really famous for his short sentences. He likes being brief, though as a critic once remarked, “Voltaire is interminably brief.”

Voltaire’s most famous work, Candide, is full of telling phrases. “If this is the best of all possible worlds, what are the others?” asks Candide in Chapter 6. The expression “best of all possible worlds” comes originally from the philosopher Leibniz, but it is Voltaire’s repeated use of the phrase in Candide that has made it instantly familiar today. Another saying from the novel was an instant hit with French readers: in Chapter 16, Candide and his manservant Cacambo, travelling in the New World dressed as Jesuits, fall into the hands of cannibals who exclaim triumphantly: “Mangeons du jésuite” (“Let’s eat some Jesuit”): the Jesuits were highly unpopular in France at this time, and the expression instantly became a catch-phrase.

One French expression from Candide has even become proverbial in English. In 1756, the British lost Minorca to the French, as a result of which Admiral Byng was court-martialled and executed. Voltaire has fun with this in Chapter 23:

‘And why kill this admiral?’
‘Because he didn’t kill enough people,’ Candide was told. ‘He gave battle to a French admiral, and it has been found that he wasn’t close enough.’
‘But,’ said Candide, ‘the French admiral was just as far away from the English admiral as he was from him!’
‘Unquestionably,’ came the reply. ‘But in this country it is considered a good thing to kill an admiral from time to time, pour encourager les autres.’

Voltaire’s other writings are equally full of pithy and memorable short sentences, which often help him drive home a point, such as this, from his Questions sur l’Encyclopédie: “L’espèce humaine est la seule qui sache qu’elle doit mourir” (“The human species is unique in knowing it must die”).

Other lines, like this one from his poem about luxury, Le Mondain, “Le superflu, chose très nécessaire” (“The superfluous, a very necessary thing”) are all the more memorable for being in verse. Voltaire’s facility for producing snappy phrases is even there in his private correspondence, as this letter to his friend Damilaville (1 April 1766): “Quand la populace se mêle de raisonner, tout est perdu”(“When the masses get involved in reasoning, everything is lost”).

And one phrase that still resonates with us comes from a private notebook that Voltaire surely never intended to publish: “Dieu n’est pas pour les gros bataillons, mais pour ceux qui tirent le mieux” (“God is on the side not of the heavy battalions, but of the best shots”).

Then there are the ones that got away, the one-liners he never actually said – ‘misquotations’ in the parlance of the Oxford Dictionary of Quotations. Hardly a week passes without a newspaper quoting “I disapprove of what you say, but I will defend to the death your right to say it.”

Voltaire’s rallying cry of free speech is central to our modern liberal agenda, so it’s a bit awkward that he never actually said it. The expression was made up in 1906 by an English woman, biographer E. B. Hall. But she meant well, and we have collectively decided that Voltaire should have said it. Another advantage of Voltaire’s one-liners is that they provide great marketing copy, and a quick search on the web reveals that many of them are for sale, on t-shirts, shopping-bags, and mugs. “I disapprove of what you say, but I will defend to the death your right to say it” is especially popular, in French as well as English – which explains my favourite t-shirt: “Je me battrai jusqu’à ma mort pour que vous puissiez citer erronément Voltaire” (“I will fight to my death so that you can quote Voltaire incorrectly”).

Luckily, wit is contagious. There is a famous one-liner in Beaumarchais’ The Marriage of Figaro, when the servant Figaro imagines addressing his aristocratic master: “Vous vous êtes donné la peine de naître, et rien de plus” (“You took the trouble to be born, and nothing more”). This has become so celebrated that we have forgotten that Beaumarchais was only improving on a less snappy one-liner he had found in one of Voltaire’s more obscure comedies. George Bernard Shaw, a self-styled follower of Voltaire, has fun with misattributed sayings in Man and Superman:

Tanner: Let me remind you that Voltaire said that what was too silly to be said could be sung.

Straker: It wasn’t Voltaire. It was Bow Mar Shay.

And so we go on inventing Voltaire. Another dictum that has recently gained wide currency on the web is this: “To learn who rules over you, simply find out who you are not allowed to criticize.”

Now regularly attributed to Voltaire, this saying seems to originate with something written in 1993 by Kevin Alfred Strom, an American neo-Nazi Holocaust denier, and not a man who obviously exudes Voltairean wit and irony. But once you become an authority, it seems, all sides have a claim on you.

The one-liner can seem a good way of encapsulating a truth: “Si Dieu n’existait pas, il faudrait l’inventer” (“If God did not exist, it would be necessary to invent him”).

Voltaire knew he was on to a winner with this line, from a poem of 1768 (the Epître à l’auteur du livre des trois imposteurs), and he re-used it often in later works. Another much-repeated phrase occurs at the end of Candide. When the characters finally come together, after umpteen trials and tribulations, all argument is silenced with the words “Il faut cultiver notre jardin” (“We must cultivate our garden”). Is this a precious nugget of wisdom, neatly encapsulated? Or is it just another “Brexit means Brexit”, a trite phrase meaning anything and nothing? But that, of course, is another use of the one-liner: to maintain suspense, while bringing down the curtain at the end….

Nicholas Cronk is Professor of French Literature in Oxford and Director of the Voltaire Foundation. For the last decade, he has been general editor of the Complete Works of Voltaire. He is also currently Président of the French Société des études voltairiennes, based at the Sorbonne. He has published many editions of individual Voltaire texts, and over fifty articles on Voltaire, in English and French. He has also edited a number of books on Voltaire, including Voltaire and the 1760s (2008), and Les 250 ans de Candide (with N. Ferrand, 2013). He also recently edited the Cambridge Companion to Voltaire (2009) and has edited and introduced two Voltaire works in the Oxford World's Classics series.  He is also the author of Voltaire: A Very Short Introduction.