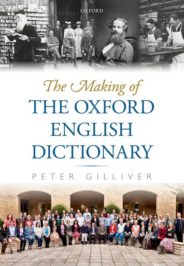 The Oxford English Dictionary is recognized the world over, but much of its history isn’t so widely known: as with a respected professor or an admired parent, it’s all too easy simply to make use of its wisdom and authority without giving much thought to how it was acquired. Read on for some interesting nuggets of information about the history of this extraordinary project that you may not have encountered elsewhere.

1. The project which eventually became the OED was launched in Somerset House in 1857.

2017 marks the 160th anniversary of the decision by the Philological Society of London to establish a “Committee to collect unregistered words in English.” The Philological Society had been founded in 1842 with the declared objects of “the investigation of the Structure, the Affinities, and the History of Languages; and the Philological Illustration of the Classical Writers of Greece and Rome,” but from its earliest years, it had taken a particular interest in the study of the English language. Initially, its meetings took place in the London Library in St James’s Square, but they later moved to the rooms occupied by the Royal Astronomical Society at Somerset House in the Strand; and it was here, in June 1857, that it was announced that the Society’s Council had appointed the aforementioned Committee, consisting of Herbert Coleridge, Frederick Furnivall, and Richard Chenevix Trench. The Committee’s original aim was to collect evidence only for words which were not already “registered” in two of the most important dictionaries of English then available—the latest edition of Samuel Johnson’s famous dictionary, and a more recent dictionary compiled by Charles Richardson—so that these “unregistered” words could be covered in a new supplementary dictionary; but a few months later, the Society resolved to expand the remit of the project to embrace the compilation of a fully comprehensive dictionary of the language.

2. The Dictionary could have become known as the Cambridge English Dictionary, had it not been turned down by Cambridge.

During the project’s early years, the right to publish the Dictionary was offered to various publishers, including—in 1876—Cambridge University Press, who were approached by Frederick Furnivall (himself a Cambridge graduate) with an invitation to “take up a big thing that’ll ultimately bring you a lot of profit and do you great credit.” The proposal was swiftly rejected by Cambridge, who seem to have been suspicious of the rather eccentric Furnivall, and a few months later, Oxford University Press were approached with a similar proposal, which—after nearly two years of negotiations—led to the signing of contracts between the Press, the Philological Society, and the Dictionary’s first Editor, James Murray. In fact, the Dictionary never did bring “a lot of profit” to OUP—one estimate from 1928, the year when the first edition was finally completed, put the total costs at £400,000—but it did certainly bring “great credit.”

3. The first person to be employed as an editorial assistant on the OED had to be sacked for industrial espionage.

The first person to work alongside James Murray after he became Editor of the Dictionary was his brother-in-law, Fred Ruthven, but he was engaged mainly in secretarial and clerical work. He also fitted out the purpose—built shed where the Dictionary was to be compiled—which became known as the “Scriptorium”—with shelves and pigeonholes, in order to store the two million-odd quotation slips that had been collected. He was soon joined by Sidney Herrtage, a former civil engineer and amateur literary scholar who had been recommended to Murray by Furnivall as capable of assisting him with editorial work, and who did indeed proved to be a capable assistant, drafting Dictionary entries for Murray to review. However, in 1882 he was horrified to discover that Herrtage had begun to work for a rival dictionary project—the Encyclopedic Dictionary, published by Cassells under the editorship of Robert Hunter—and, even worse, was secretly making use of the materials in the Scriptorium in his work for Hunter’s dictionary. Such a betrayal of trust left Murray with little option but to dismiss him. Herrtage—who was also discovered to have “borrowed” some valuable books from the Scriptorium—went on to write most of the definitions in the Encyclopedic Dictionary. His place in the Scriptorium was taken by Alfred Erlebach, whom Murray knew from teaching alongside him at Mill Hill School; he proved to be a much more reliable assistant (and was soon joined by many others).

4. Working conditions in the Scriptorium were once described as “pestilential almost beyond endurance.”

After six years at Mill Hill, where Murray combined school teaching with his work on the Dictionary, it was decided that the project should be moved to Oxford, with the aim of allowing Murray to concentrate entirely on lexicography (and therefore make better progress: only one section of the Dictionary, extending as far as the word ant, had so far been published). His new house in Oxford needed a new Scriptorium; but it was intimated to Murray that his new neighbour, an Oxford professor called Albert Venn Dicey, did not wish to have the view from his house spoilt by the new building. Accordingly, Murray’s Oxford Scriptorium was sunk more than two feet into the ground. In consequence it suffered permanently from damp, and in winter was extremely cold. Murray is reported to have sometimes sat at his desk in a thick overcoat with his feet in a box to keep out draughts. Several of his assistants were less hardy, and in fact found conditions in the Scriptorium so bad that they had to give up their work. It was the assistant Arthur Strong who, in 1888—only a few months after starting work—described the atmosphere as “pestilential almost beyond endurance”; he resigned the following spring.

5. The OED was pioneering in its employment of female editorial staff.

The first women to be employed on the OED were two “young women of fair education,” Miss Scott and Miss Skipper, who were taken on in 1879 to help with the massive task of sorting the accumulated quotation slips into alphabetical order. However, at this point in the 19th century, it was unusual for women to be employed to do anything more intellectually demanding than this; so that when, in 1889, Murray floated the idea of “engaging a little feminine assistance” among his regular staff, he knew that he was making a bold suggestion. In fact, the proposal met with a favourable response from OUP. Philip Lyttelton Gell, the man in charge of the Press at this time, commented: “I wish we could enlist a few thoroughly competent and qualified women in the work. There are many philologists among them nowadays.” Although in the event it was not until 1895 that he took on his first academically qualified female assistant: Mary Dormer Harris, who had studied English at Lady Margaret Hall in Oxford. She only stayed for six months—in fact she went on to work on another important lexicographical project, Joseph Wright’s English Dialect Dictionary—but she was soon followed by other women. And of course we should not overlook the female members of Murray’s own family: his wife Ada helped with the project from the beginning, and his daughters joined in (along with their brothers) as soon as they were old enough. Eleanor Bradley, the daughter of the Dictionary’s second Editor Henry Bradley, also worked alongside her father for many years.

Peter Gilliver has been an editor of the Oxford English Dictionary since 1987, and is now one of the Dictionary's most experienced lexicographers; he has also contributed to several other dictionaries published by OUP. In addition to his lexicographical work, he has been writing and speaking about the history of the OED for over fifteen years. He is also the author of The Making of The Oxford English Dictionary.