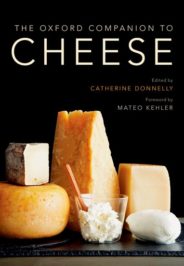 The Oxford Companion to Cheese

The discovery of cheese predates recorded history. Although the earliest evidence of cheesemaking can be traced back to 5,500 BCE, historians theorize that cheese was originally discovered accidentally: it’s probable that cheesemaking first occurred inside animals organs used for storing milk.

History does trace back to the world’s first cheesemaking factory, which opened in Switzerland in 1815. The industrialization of cheesemaking soared as the United States began opening factories throughout the country, leading to the large-scale production of cheese globally. Since then, cheese has been, and continues to be, a cultural staple around the world–with a wide selection available, from cheddar to gouda to camembert.

To celebrate Cheese Lovers Day, Oxford University Press wants to know: what kind of cheese are you? Referencing The Oxford Companion to Cheese, we’ve put together a quiz to help you find out.

This quiz was created by the Oxford University Press Trade Marketing Team.

Which library matches your personality? [Quiz]