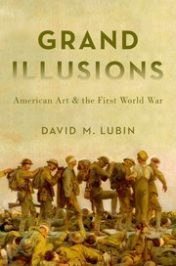 Running from November 2016–April 2017, the Pennsylvania Academy of Fine Arts hosts the exhibition World War I and American Art. With over 150 works by American artists, this carefully curated exhibit is the first major exhibit to explore how American artists reacted to World War I. At the center is John Singer Sargent’s sizable and impressive masterpiece, Gassed (1919). David M. Lubin, co-curator of the exhibit, depicts the painting in his recent book, Grand Illusions:

Set against a blank sky tinged with pale lavender, cream, and mustard
tones suggestive of the invisible gas that poisoned them, ten sightless soldiers,
their eyes bandaged, stumble in a row down a duckboard lane, each
steadying himself on the shoulder of the man in front of him—although one
of them momentarily lurches out of line, presumably to vomit from gas-induced
sickness. Ironically, several of them carry a rifle—a firearm with a
built-in sight, that is, a mechanism for guiding the eye. That they do so only
heightens the painting’s aura of futility. An orderly guides them on their
way. Approaching a rise in the duckboard, one of the wounded raises his leg
in an exaggerated way, as if the orderly has cautioned him to mind his step.
In the background, only to be glimpsed through the legs of the blindfolded
marchers, healthy soldiers scrimmage in a casual game of football, with one
of the players extending his knee in a kick that parallels the exaggerated step
of the blind man in line.

Browse our slideshow to view the installation of this celebrated painting.

John Priest is a Marketing Assistant at Oxford University Press.