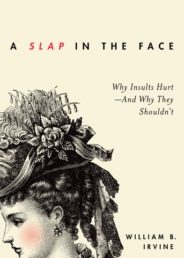 A Slap in the Face: Why Insults Hurt—And Why They Shouldn't

Insults have lately been making headline news. Last year, the world witnessed an attack on the offices of the French satirical newspaper Charlie Hebdo. Eleven people were killed, and another eleven were injured. The attackers felt that some of the cartoons the newspaper had published had insulted the prophet Mohammed, and they were willing to sacrifice their own lives to right that wrong.

In America, political pundits were astonished by the rise of Donald Trump. The rise was fueled in large part by his willingness to insult other Republican candidates, along with a wide array of ordinary citizens. Trump insulted women. He insulted war heroes. He insulted journalists. And this was just the beginning. The New York Times recently published a list of 258 people, places, and things he had insulted—on Twitter alone. There were also many verbal insults.

On America’s college campuses, insults made headlines of a different sort. Students complained that they were being bombarded by insults. As a result, they felt humiliated and even downtrodden.

I was initially puzzled by these last reports. Had college campuses—including places like Yale University—been invaded by louts, bullies, and bigots? Further investigation revealed that what instead had happened is that students—in many cases, with the encouragement of the university faculty and administration—had defined down what counted as an insult. They had, as a result, become hypersensitive to insults, meaning that just about anything could count as one. On one campus, for example, students were cautioned against referring to a mixed group of male and female students as “you guys.” The females in the group might feel left out, and as a result, their feelings might be hurt.

This last “insult” is an example of what have become known as microaggressions. They are such will-o’-the-wisp things that it takes training to spot them, and at many universities, there are people who are quite happy to provide that training. Once you start looking for microaggressions, though, you will find them everywhere, and as a result, you will end up feeling very insulted, which is what had happened on American college campuses.

At the same time as students were learning to spot microaggressions, they were being told that as individuals, there was very little they could do to defend themselves. What they had to do, when insulted, is to turn to the university administration for protection—or maybe even the campus police.

If we could travel back in time and transport an ancient Stoic philosopher—someone like Epictetus or Seneca—back to the future, he would likely be astonished by efforts to sensitize students to insults. What these students need, he would assert, is to be desensitized! More precisely, they need to learn how to shrug off insults. Furthermore, telling students that they are helpless to deal with insults on their own only makes matters worse. Start thinking of yourself as a helpless victim, and you are likely to have a miserable existence.

The Stoics, after devoting considerable thought to how best to respond to insults, concluded that we would do well to become insult pacifists. When insulted, we should not insult back in return; we should instead carry on as if nothing had happened. It is, I have found, a very effective way to deal with many insults. On failing to provoke a rise in his target, an insulter is likely to feel foolish.

And if we feel that we simply must say something in response to an insult, the Stoics recommend that we engage in self-deprecating humor—that we insult ourselves even worse than the insulter did. I have experimented with this technique. A few years back, a colleague told me that as part of his research for a book he was writing, he was reading some articles I had written. I felt flattered. Then he lowered the boom: he explained that he was trying to decide whether he should characterize me as being evil or merely misguided.

There were many things I could have said at that moment, but I suspect that none of them would have been as effective as what I did say: “Why can’t you characterize me as being both evil and misguided?” It turned out to be a singularly effective reply. If I remember correctly, his only response was to complain that I need to take things more seriously—meaning, I guess, that when insulted, I need to let my feelings be hurt. By turning an insult into a joke, we prevent the insult from taking root in our psyche, where it will cause us to experience needless anguish.

What about hate speech, though? Should we remain silent in the face of a racist insult? It depends on the situation. But the one thing we should not do is take the insult personally. We should instead dismiss hate speech, in much the same way as we should dismiss the barking of an angry dog. We should keep in mind that the dog, not being fully rational, cannot help itself. The Stoics would add that if we let ourselves get angered or upset by a barking dog, we have only ourselves to blame.

The Stoics lived long ago and in a very different world than the one we inhabit. But because human nature has changed little in the last two millennia, their advice regarding insults remains as useful as ever. Has someone insulted you? If you can bring yourself to shrug it off, you will simultaneously reduce the harm it does you and deprive the insulter of the pleasure he might have taken in hurting your feelings. It is a win-win strategy.

William Irvine will be a guest speaker at the 2016 STOICON in New York City on October 15th. Visit the Stoicism Today blog for more information on Stoic Week.