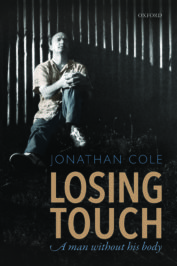 Losing Touch: A man without his body

When I first met Ian Waterman in the mid-1980s I could scarcely believe him. He claimed to have lost touch, and movement and position sense (termed proprioception) below the neck, though he could still feel pain and temperature, and his movement nerves were unaffected. Not only was I not aware of any such condition in medicine, but he had walked to the clinic and was sitting calmly as we chatted. How could his apparently normal functioning be reconciled with sensory loss which should have led to complete loss of coordination and useful movement? Tests soon showed his problem was exactly as he described it and, that when deprived of vision he was completely hopeless at moving, as expected. He had lost all automatic movement and was doing everything, instead, by attention to all aspects of movement, with vision to tell him his intentions had been successful.

For his part Ian hated doctors; he had had the condition 12 years by then and doctors had helped little. He viewed me, a young clinical neurophysiologist, with supreme suspicion. But then, having done the clinical thing, I sat down with him and asked just what it was like to live without touch and proprioception. No one had ever asked that before and Ian was intrigued.

That was the beginning of over 30 years’ collaboration. We’ve done research in labs across the United Kingdom, Europe, and the United States. It was soon clear how astute Ian was at judging research and researchers, so we do work with Ian never simply on him. He has also been the subject of a BBC documentary, been portrayed on stage, hung out with Oliver Sacks, and even flown in microgravity. Working together on the science, as well as spending long periods travelling and hanging out in hotels, restaurants, as well as the odd dive, has involved fun times as well as work. But his life has not been just research; he runs a successful business performing access audits for hotels, banks, trains, and hospitals—using his need for close attention towards movement in the built environment to his commercial advantage, as well as being the mastermind behind Pedigree Turkeys, which breeds rare types of turkeys and poultry. And he has been married three times.

I wrote about his early years, learning to move again, escaping after 17 months in rehab and of his triumph over disability in 1991 in Pride and a Daily Marathon. But now, 25 years later, we wanted to explore living without touch and proprioception over four decades, as he turned 60 and as he has come to terms with his impairment in deeper ways. So we’ve sat and talked, digital recorder running, as we built up his reflections on a remarkable life. Despite living with the condition for 40 years, Ian is still as vulnerable as ever, and any reduction in mental effort towards movement, whether due to a head cold or the lights fusing, takes him back to stage one again.

We wanted to explore how the neuroscience was actually done and Ian’s contribution to the understanding of touch and proprioception. We also focussed on how he moved from being a passive participant to become an astute collaborator and even critic of neuroscience and neuroscientists. For Ian, neuroscience is not impersonal either but, rather, uncovers his tricks and strategies for living, especially when investigating his sense of intimacy without touch and his use of gesture without automatic movement.

Ian has also fascinated more than scientists. He has been a subject of vignettes in two Peter Brook plays and worked with magicians, philosophers, and choreographers—awakening them all to the importance of proprioception and its loss. To each and all, Ian has made himself available and answered questions as best he could.

We were keen to describe Ian’s life and his experiences not just during experiments but over decades. So often science dips in and leaves; living in a condition for years and decades gives a perspective and insights not to be found in shorter accounts. The great Russian neuropsychologist, Alexander Luria, did this in his narrative biographies and I have tried to do the same in my previous books on spinal cord injury and facial immobility. People live a long time with their conditions; the longer view and mature reflection are necessary, even essential, to understand how living successfully with an unusual condition evolves by subtle and creative means.

Jonathan Cole is a consultant in clinical neurophysiology at Poole Hospital and a professor at Bournemouth University. In addition to empirical science he has always been interested in the experience of living with neurological impairment and has written four previous books in this area. He is also the author of Losing Touch: A Man Without His Body.

The neurology of the Winter Olympics