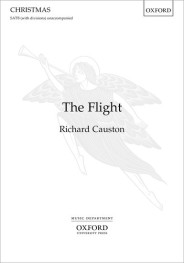 Richard Causton’s studies took him from the University of York via the Royal College of Music and the Scuola Civica in Milan, to King’s College, Cambridge where he is Lecturer in Composition. In addition to composition, Causton writes and lectures on Italian contemporary music and regularly broadcasts for Italian radio. In our occasional series, in which we ask Oxford composers questions based around their musical likes and dislikes, influences, and challenges, we spoke with Richard Causton about his writing, new music, and his desert island playlist.

Which of your pieces are you most proud of and/or holds the most significance for you?

That’s quite a tricky question but probably the piece that holds the most significance is Millennium Scenes, an orchestral piece I wrote in 1998-99. It was a rite of passage — extremely difficult to compose — and it pushed me way outside my comfort zone. Writing it certainly changed me, and it made my whole experience of music quite different.

Which composer were you most influenced by and which of their pieces has had the most impact on you?

May I name two composers instead of one? If so, they would be Stravinsky and Messiaen. The Rite of Spring and Turangalîla have both been enormous experiences for me and they are no less fascinating as the years pass. Another very important piece for me has been Nielsen’s Fifth Symphony: it sets up an extraordinarily powerful dramatic scenario within the structure and offers a new way of thinking about musical character and form.

It was a little piece in triple time which I mistakenly thought of as a march. I scored it for flute, cello, clarinet and piano and made my sisters and my mum attempt to play it with me. It was not a great success. I must have been about eight years old.

If you could have been present at the premiere of any one work (other than your own) which would it be?

I’d love to have been present at one of Berio’s works of the 1960s: Passaggio for example, or his Sinfonia. In Passaggio, he sets up little groups planted in the audience who start to heckle at various points in the piece. Suddenly you don’t know who’s a performer and who’s audience and you feel right in the middle of it all — it’s an electrifying coup-de-theatre and really shakes things up.

What piece of music have you discovered lately?

A piece for large orchestra by Reinbert de Leeuw called Der nächtliche Wanderer. It’s a real epic — an orchestral piece in a continuous movement lasting around 40 minutes. I was intrigued by his starting such a piece with the sound of a dog barking, but it works extremely well.

Is there a piece of music you wish you had written?

With a really great piece, it becomes an affair of the heart while you’re listening to it. I might wish I’d written the piece as I listen to (say) a Beethoven symphony – the music is so involving and persuasive. I think that’s probably how I started to write music in the first place, but in reality it’s absurd to wish you’d written someone else’s piece: it’s like wishing you were another person. So in starting to create a new piece of my own, I really need to start by closing the door of the room I’m working in and leaving Beethoven and all the others outside.

When I was younger, it felt as if I had all the time in the world but now I’m a little older, I never feel I have enough!

What would be your desert island playlist?

I’d like to think it’s become tighter and technically more rigorous. I’ve gradually learned how to approach structuring longer pieces. But on a poetic, expressive level the basics have probably remained much the same.

Richard Causton’s most recent publication is The Flight. It was commissioned by King's College, Cambridge for the 2015 Festival of Nine Lessons and Carols, and sets a newly-written poem by George Szirtes on the subject of the flight to Bethlehem. The Sunday Times called ‘Causton is among our most imaginative composers’.