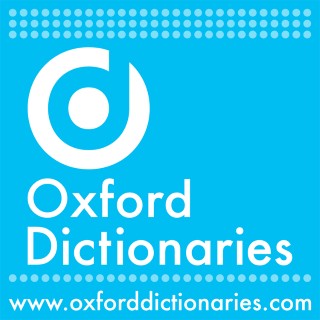 Word of the Year season has closed with the selections of the American Dialect Society this past weekend, so it’s time to reflect on the different words of the 2015. The refugee crisis and gender politics have featured prominently in selections around the globe as well as the influence of technology. 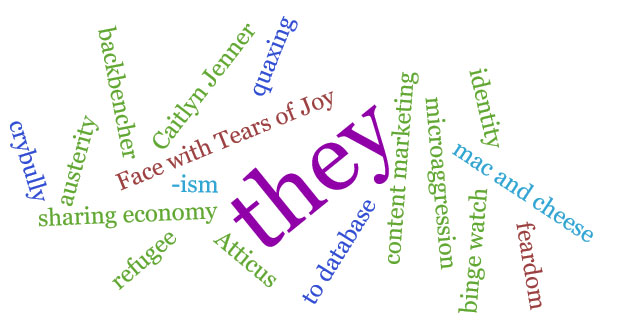 In the English-speaking world:

Collins Dictionary named “binge watch” as their Word of 2015.

Oxford Dictionaries selected the “Face with Tears of Joy” emoji.

Dennis Baron selected the gender-neutral singular “they” as his Word of the Year.

Quartz’s (unofficial) nomination for Word of the Year is also the singular “they”.

The Australian National Dictionary Centre’s Word of the Year is “sharing economy”.

Ben Zimmer thought “they” as a gender-neutral singular pronoun was an early front-runner.

Lynne Murphy’s US-to-UK Word of the Year is “mac & cheese” and UK-to-US is “backbencher”.

Gary Nunn reflected on the whole Word of the Year phenomenon.

Samantha Bennett also reflected on Word of the Year nominees.

Lake Superior State University released their annual list of words to be banned.

Michael Skapinker was interested in a few new verbs this year, such as “to database”.

“Atticus” is the Name of 2015 according to Baby Name Wizard.

Gender-neutral they wins Most Useful by a landslide! #WOTY15 #LSA2016

And the winner of Most Creative is ammosexual! No run-off required. #WOTY15 #LSA2016

@mashedradish @OUPAcademic I'm surprised at the absence of "Crybully". Definitely my word of the year.

In China, “廉,” or “incorrupt,” was named the country’s Chinese character of 2015 according to an annual poll organized by the government backed-Chinese National Language Monitoring and Research Center, the Commercial Press, People’s Daily Online, and CCTV.

In Taiwan, the United Daily News organized a voter poll, which selected the Chinese character for change, “換”.

In Japan, the kanji “an,” which can mean “safety” or “security,” was selected by the Japan Kanji Aptitude Testing Foundation.

And yet another for Japan, “jiwaru” (to grow on you) was selected by Sanseido.

A couple nominations for “galawang breezy” from Kapuso Mo, Jessica Soho fans in the Philippines:

The South African journal LitNet has selected the hashtag symbol as its Afrikaans word of the year.

In France, the Festival du mots chose “Laïcité” (by the expert committee) and “Liberté d’expression” (by popular vote).

In Italy, ‘Jihadista’ (jihadist) and ‘sciarpata’ [translation?] are among the notable new words added to the Zingarelli dictionary (le parole dell’anno nuovo).

Also in Italy, the readers of Repubblica selected “Occupazioni” (occupations (as in demonstrations)) as la parola dell’anno in a reader poll.

Similarly, in Portugal, “refugiado” (refugee) was selected as Palavra do Ano 2015 by Porta Editora.

In Denmark, “flygtningestrømme” (stream of refugees) was named Word of the Year (kårer årets danske ord) by the Danish Language Board.

In the Netherlands, “Sjoemelsoftware” (scamming software) has been voted as the Dutch Word of the Year at the annual Onze Taal congress.

In Norway, “det grønne skiftet” (The green shift) was selected by the Språkrådet (Norwegian Language Council).

In Iceland, the RÚV, the Árni Magnússon Institute for Icelandic Studies, and Mímir have been running a poll. “Fössari” — a new youthspeak term for Friday, in particular for Friday night and its attendant partying — won the poll. [Thank you Katherine Connor Martin.]

Does anyone know the Swiss Word of the Year? I can only find information on 2014 words.

And finally the Wall Street Journal still has voting open on which word you think captures 2015.

Are there any words of the year that I missed? Any translations that can be improved? Please leave a comment below.

Lost for words? Introducing Oxford’s “Words of an Unprecedented Year”