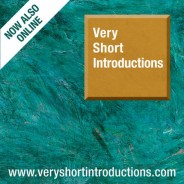 Though the winter season in the northern hemisphere doesn’t officially begin until Monday, 21 December, many of us anticipate the joyful holidays and the not-so-joyful cold weather with bated breath. To get you prepped with some trivia arsenal for holiday parties, we’ve pulled some interesting facts about winter from our Very Short Introductions Online resource:

1. The eight-night festival of Chanukah (aka Hanukkah) that begins on the twenty-fifth of Kislev (the month of dreams in the Hebrew calendar, overlapping the Gregorian months of November/December) was once a thanksgiving of military victory and was eventually transformed into a celebration of triumph of light over darkness. (Taken from Judaism: A Very Short Introduction, Second Edition, by Norman Solomon).

2. During the time of industrial capitalism in Scotland, Robert Owen—owner of New Landmark mills—established a curfew of 10:30pm during the winter. The strict discipline was intended for employers to extend control over their employees (during a time when labor laws were virtually nonexistent) in order to keep productivity at one hundred percent. (Taken from Capitalism: A Very Short Introduction, by James Fulcher).

3. Despite the notion that the Inuit have many different words to refer to different types and conditions of what English speakers simply term “snow”, there are actually only two relevant lexical roots: ganik (referring to snow in the air) and aput (snow on the ground). From those two roots, many words are derived, much like the way English can produce “snowfall”, “snowflake”, and “snowball”. (Taken from Sociolinguistics: A Very Short Introduction, by John Edwards).

4. As an experiment, and partially for fun, Benjamin Franklin attempted to slaughter his Christmas turkey by electrocution but instead shocked himself. Through this, he was able to show that the Leyden jars he used stored their electrical charge on the surface of the glass, not in the water they contained. (Taken from Magnetism: A Very Short Introduction, by Stephen J. Blundell).

5. Ancient armies seldom campaigned for war in the winter, mainly due to the difficulty in securing fodder and in moving supplies, which was commonly done via sea travel. The reluctance was less due to shelter troops from bad weather. (Taken from Ancient Warfare: A Very Short Introduction, by Harry Sidebottom).

6. Though angels and Christmas trees are commonly paired nowadays, Christianity likely borrowed the pagan symbol of the fairy—a representation of a tree’s spirit—and adapted it to their religious beliefs. (Taken from Angels: A Very Short Introduction, by David Albert Jones).

7. Kwanzaa, a festival celebrated by African Americans from 26 December to 1 January, is a secular celebration that is believed to be more consistent with the aspiration of freedom—returning to their cultural heritage in order to reclaim a more authentic African identity—than black Christianity. (Taken from African American Religion: A Very Short Introduction, by Eddie S. Glaude Jr.).

Connie Ngo is a Marketing Assistant at Oxford University Press.