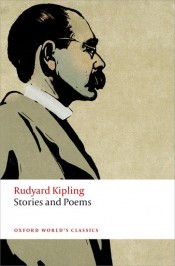 The privileged poets of the Great War are those who fought in it—Rosenberg, Owen, Sassoon. This is natural and human, but it is not fair. Kipling is one of the finest poets of the War, but he writes as a parent, a civilian, a survivor—all three of them compromised positions. “If any question why we died, / Tell them, because our fathers lied,” he writes. It is widely believed that Kipling was, himself, one of these lying fathers—that his jingoism promoted the War, that his propaganda supported the prolongation of its madness, and that he shepherded—bullied—his only son, John, into the front line, where he died at Loos in 1915. None of this is true, but Kipling’s grief, and the guilt that all survivors feel, have made him an easy target. Of the grief, at least, he made extraordinary art, in stories as well as poems. He writes of bereavement, of compulsive memory, of what we now call ‘post-traumatic stress’, and he knew that we are haunted most by ourselves:

I have a dream—a dreadful dream—
A dream that is never done,
I watch a man go out of his mind,
And he is My Mother’s Son.

He could write about the business of war, too, answering its savage economy with his own:

The ships destroy us above
And ensnare us beneath.
We arise, we lie down, and we move
In the belly of Death.
The ships have a thousand eyes
To mark where we come . . .
But the mirth of a seaport dies
When our blow gets home.

Three soundless dots give us the track of the submarine’s torpedo; when it gets home, we are reminded by a dreadful pun that the sailors on the stricken ship never will. The pity of war? Yes, but its pitilessness, too.

The Garden called Gethsemane
In Picardy it was,
And there the people came to see
The English soldiers pass.
We used to pass—we used to pass
Or halt, as it might be,
And ship our masks in case of gas
Beyond Gethsemane.

I have long thought this the greatest poem of the Great War. Its imaginative empathy is not surprising—Kipling could think himself into almost any human condition, and voice it from within—but the poem has another voice than that of the soldier, or rather Kipling lends him the poet’s masterful tact. Nothing in the poem is overstrained (except, perhaps, the final exclamation mark) yet the whole is unbearable. The soldier’s blank gaze takes in the scene with homely dread, from the ‘pretty lass’ whose words he cannot really hear, to the enduring English comedy of manners by which officers and men each contemplate their death from the proper vantage point. He is Jesus, this young man, praying in the Garden of Gethsemane; but Kipling was not a Christian. When Jesus prays, in Matthew 26:39, he does so in terms that the poem implicitly rejects: “O my Father, if it be possible, let this cup pass from me: nevertheless not as I will, but as thou wilt.” Kipling has no nevertheless, no acceptance of God’s will, no embrace of sacrifice. The soldier’s anguish is wholly human.

The craft of words mattered enormously to Kipling. The small word ‘pass’ begins by meaning ‘to pass through’ (the little village), though even here a little chill accompanies it, as ‘the people’, with their curious unconscious cruelty, come ‘to see the English soldiers pass’—pass away, into what lies ‘beyond Gethsemane’. Then the word changes its meaning, burdened by its biblical idiom: ‘I prayed my cup might pass’, that I might be spared; yet ‘my cup’ (altered from Matthew’s ‘this cup’) already tells us that this won’t happen. These two meanings of ‘pass’, apparently unrelated, are joined in the poem by the song-like rhythm of the lines in which they are repeated: ‘We used to pass—we used to pass’ in the first stanza; ‘It didn’t pass—it didn’t pass’ in the last. Here poetry does its utmost, gives everything that can be given by the sounds of words and their cadence, and by that most difficult servant of poets, metrical art. The poem is written in one of the oldest English metres, sometimes called ‘common metre’, an alternating pattern of eight and six syllables which is the foundation of many of our hymns and popular songs. It is the metre of the common man, who speaks here, as he should, with impersonal authority.

Featured Image: Canadian soldiers in a trench, in 1916 during WWI, by Bibliothèque nationale de France. Public Domain via Wikimedia Commons.

Daniel Karlin has taught at University College London, Boston University and the University Sheffield before taking up his current post at the University of Bristol. He has published widely in Victorian literature, including editions of Robert Browning and books including Browning's Hatreds, Proust's English, and The Figure of the Singer. He has edited Edward FitzGerald's Rubáiyát of Omar Khayyám and Rudyard Kipling's Stories and Poems for Oxford World's Classics.

Quiz: How well do you know Albert Camus?