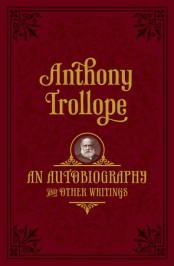 An Autobiography and Other Writings

Next week, 24 April 2015 marks the bicentenary of one of Britain’s great novelists, Anthony Trollope. He was an extremely prolific writer, producing 47 novels, as well as a great deal of non-fiction, in his lifetime. He also worked for the Post Office, and introduced the pillar box to Britain. So, do you think you know Anthony Trollope? Test your knowledge with our Trollope bicentenary quiz.

An Autobiography and Other Writings by Anthony Trollope is edited by Nicholas Shrimpton.

Anthony Trollope became a junior clerk in the General Post Office in London in 1834, but only began to make any professional progress when transferred to Ireland in 1841. He married Rose Heseltine of Rotherham in 1844. Trollope did not return permanently to England until 1859, although he travelled extensively on Post Office business. By the end of his professional career, he had become a successful and important civil servant. Among his achievements is the introduction in Great Britain of the pillar‐box for letters. He resigned from the Post Office in 1867, and stood unsuccessfully for Parliament as a Liberal in 1868. He edited the St Paul's Magazine, 1867–70. His literary career began with The Macdermots of Ballycloran (1847) but not until his fourth novel, The Warden (1855), did he establish the manner and material by which he is best known. This, the first of the ‘Barsetshire’ series, was followed by Barchester Towers (1857), Doctor Thorne (1858), Framley Parsonage (1861), The Small House at Allington (1864), and The Last Chronicle of Barset (1867).

Nicholas Shrimpton is the editor of Trollope's The Prime Minister (2011) for Oxford World's Classics, and of a new edition of The Warden (2014). He is currently completing an edition of Matthew Arnold's poetry and a book on Arnold's early poetry.

How well do you know Anne Brontë? [quiz]