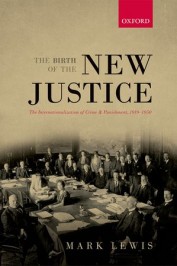 The Birth of the New Justice

There was a great change in peace settlements after World War I. Not only were the Central Powers supposed to pay reparations, cede territory, and submit to new rules concerning the citizenship of their former subjects, but they were also required to deliver nationals accused of violations of the laws and customs of war (or violations of the laws of humanity, in the case of the Ottoman Empire) to the Allies to stand trial.

This was the first time in European history that victor powers imposed such a demand following an international war. This was also the first time that regulations specified by the Geneva and Hague Conventions were enforced after a war ended. Previously, states used their own military tribunals to enforce the laws and customs of war (as well as regulations concerning espionage), but they typically granted amnesty for foreigners after a peace treaty was signed.

The Allies intended to create special combined military tribunals to prosecute individuals whose violations had affected persons from multiple countries. They demanded post-war trials for many reasons. Legal representatives to the Paris Peace Conference believed that “might makes right” should not supplant international law; therefore, the rules governing the treatment of civilians and prisoners-of-war must be enforced. They declared the war had created a modern sensibility that demanded legal innovations, such as prosecuting heads of state and holding officers responsible for the actions of subordinates. British and French leaders wanted to mollify domestic feelings of injury as well as propel an interpretation that the war had been a fight for “justice over barbarism,” rather than a colossal blood-letting. They also sought to use trials to exert pressure on post-war governments to pursue territorial and financial objectives.

The German, Ottoman, and Bulgarian governments resisted extradition demands and foreign trials, yet staged their own prosecutions. Each fulfilled a variety of goals by doing so. The Weimar government in Germany was initially forced to sign the Versailles Treaty with its extradition demands, then negotiated to hold its own trials before its Supreme Court in Leipzig because the German military, plus right-wing political parties, refused the extradition of German officers. The Weimar government, led by the Social Democratic party, needed the military’s support to suppress communist revolutions. The Leipzig trials, held 1921-27, only covered a small number of cases, serving to deflect responsibility for the most serious German violations, such as the massacre of approximately 6,500 civilians in Belgium and deportation of civilians to work in Germany. The limited scope of the trials did not purge the German military as the Allies had hoped. Yet the trials presented an opportunity for German prosecutors to take international charges and frame them in German law. Although the Allies were disturbed by the small number of convictions, this was the first time that a European country had agreed to try its own after a major war.

The Ottoman imperial government first destroyed the archives of the “Special Organization,” a secret group of Turkish nationalists who deported Greeks from the Aegean region in 1914 and planned and executed the massacre of Armenians in 1915. But in late 1918, a new Ottoman imperial government formed a commission to investigate parliamentary deputies and former government ministers from the Turkish nationalist party, the Committee of Union and Progress, which had planned the attacks. It also sought to prosecute Committee members who had been responsible for the Ottoman Empire’s entrance into the war. The government then held a series of military trials of its own accord in 1919 to prosecute actual perpetrators of the massacres, as well as purge the government of Committee members, as these were opponents of the imperial system. It also wanted to quash the British government’s efforts to prosecute Turks with British military tribunals. Yet after the British occupied Istanbul, the nationalist movement under Mustafa Kemal retaliated by arresting British officers. Ultimately, the Kemalists gained control of the country, ended all Turkish military prosecutions for the massacres, and nullified guilty verdicts.

Like the German and Ottoman situations, Bulgaria began a rocky governmental and social transformation after the war. The initial post-war government signed an armistice with the Allies to avoid the occupation of the capital, Sofia. It then passed a law granting amnesty for persons accused of violating the laws and customs of war. However, a new government came to power in 1919, representing a coalition of the Agrarian Union, a pro-peasant party, and right-wing parties. The government arrested former ministers and generals and prosecuted them with special civilian courts in order to purge them; they were blamed for Bulgaria’s entrance into the war. Some were prosecuted because they lead groups of refugees from Macedonia in a terrorist organization, the Internal Macedonian Revolutionary Organization. Suppressing Macedonian terrorism was an important condition for Bulgaria to improve its relationship with its neighbor, the Kingdom of the Serbs, Croats, and Slovenes. In 1923, however, Aleksandar Stambuliski, the leader of the Agrarian Union, was assassinated in a military coup, leading to new problems in Bulgaria.

We could ask a counter-factual question: What if the Allies had managed to hold mixed military tribunals for war-time violations instead of allowing the defeated states to stage their own trials? If an Allied tribunal for Germany was run fairly and political posturing was suppressed, it might have established important legal precedents, such as establishing individual criminal liability for violations of the laws of war and the responsibility of officers and political leaders for ordering violations. On the other hand, guilty verdicts might have given Germany’s nationalist parties new heroes in their quest to overturn the Versailles order.

An Allied tribunal for the Armenian massacres would have established the concept that a sovereign government’s ministers and police apparatus could be held criminally responsible under international law for actions undertaken against their fellow nationals. It might also have created a new historical source about this highly contested episode in Ottoman and Turkish history. Yet it is speculative whether the Allies would have been able to compel the post-war Turkish government to pay reparations to Armenian survivors and return stolen property.

Finally, an Allied tribunal for alleged Bulgarian war criminals, if constructed impartially, might have resolved the intense feelings of recrimination that several of the Balkan nations harbored toward each other after World War I. It might also have helped the Agrarian Union survive against its military and terrorist enemies. However, a trial concentrating only on Bulgarian crimes would not have dealt with crimes committed by Serbian, Greek, and Bulgarian forces and paramilitaries during the Balkan Wars of 1912-13, so a selective tribunal after World War I may not have healed all wounds.

Mark Lewis is the author of The Birth of the New Justice: The Internationalization of Crime and Punishment, 1919-1950, which won the Wiener Library’s Fraenkel Prize in 2013. He is also the co-author of Himmler's Jewish Tailor: The Story of Holocaust Survivor Jacob Frank, the oral history of a Polish Jew who was the head of a clothing factory at the SS-run labor camp on Lipowa Street in Lublin, Poland. Lewis is an Associate Professor of History at the College of Staten Island, City University of New York.

No-impunity as a global constitutional principle