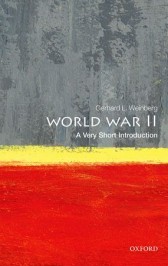 The Second World War affected me quite directly, when along with the other students of the boarding school in Swanage on the south coast of England I spent lots of time in the air raid shelter in the summer of 1940. A large German bomb dropped into the school grounds fortunately did not explode so that we survived. To process for entry into the United States, I then had to go to London and thus experienced the beginnings of the Blitz before crossing the Atlantic in September. Perhaps this experience had some influence on my deciding to write on the origins and course of the Second World War.

Over the years, there have been four trends in the writing on that conflict that seemed and still seem defective to me. One has been the tendency to overlook the fact that the earth is round. The Axis Powers made the huge mistake of failing to engage this fact during the war and never coordinated their strategies accordingly, and too many have followed this bad example in looking at the conflict in retrospect. Events in Europe, North Africa, and the Pacific often influenced each other, and it has always seemed to me that it was the ability of Winston Churchill and Franklin Roosevelt to engage the global reality that made a significant contribution to the victory of the Allies.

A second element in distortions of the war has been the influence of mendacious memoirs of German generals and diplomats, especially those translated into English. The enthusiasm of Germany’s higher commanders for Adolf Hitler and his projects vanished in the postwar years as they blamed him for whatever went wrong, imagined that it was cold and snowed only on the German army in Russia, and evaded their own involvement in massive atrocities against Jews and vast numbers of other civilians. They were happy to accept bribes, decorations, and promotions from the leader they adored; but in an interesting reversal of their fakery after the First World War, when they blamed defeat on an imaginary “stab-in-the-back,” this time they blamed their defeat on the man at the top. Nothing in their memoirs can be believed unless substantiated by contemporary evidence.

A third contribution to misunderstanding of the great conflict comes from an all too frequent neglect of the massive sources that have become available in recent decades. It is much easier to manufacture fairy tales at home and in a library than to dig through the enormous masses of paper in archives. A simple but important example relates to the dropping of two atomic bombs on Japan. One can always dream up alternative scenarios, but working through the mass of intercepted and decoded Japanese messages is indeed tedious work. It does, however, lead to the detailed recommendation of the Japanese ambassador in Moscow in the summer of 1945 urging surrender rather than following the German example of fighting to the bitter end, and to the reply from Tokyo thanking him for his advice and telling him that the governing council had discussed and unanimously rejected it.

A fourth type of misunderstanding comes from a failure to recognize the purpose of the war Germany initiated. Hitler did not go to war because the French refused to let him visit the Eiffel tower, invade the Soviet Union because Joseph Stalin would not let the German Labor Front place a “Strength through Joy” cruise ship on the Caspian Sea, or have a murder commando attached to the headquarters of Erwin Rommel in Egypt in the summer of 1942 to dismantle one of the pyramids for erection near Berlin renamed “Germania.” The purpose of the war was not, like most prior wars, for adjacent territory, more colonies, bases, status, resources, and influence. It was for a demographic revolution on the globe of which the extermination of all Jews was one facet in the creation of a world inhabited solely by Germanic and allegedly similar peoples. Ironically it was the failure of Germany’s major allies to understand this concept that led them over and over again, beginning in late 1941, to urge Hitler to make peace with the Soviet Union and concentrate on crushing Great Britain and the United States. World War II was fundamentally different from World War I and earlier conflicts. If we are ever to understand it, we need to look for something other than the number popularly attached to it.

Born in Hanover, Germany in 1928, Gerhard L. Weinberg spent from 1939 until September 1940 in England. He then moved to the United States. He worked on the War Documentation Project, establishing the project for microfilming and studying captured German documents. He has taught at the Universities of Kentucky, Michigan, and North Carolina, retiring in 1999. Weinberg has held numerous positions in professional organizations and has served on and chaired a number of US government advisory committees. His books have earned him a number of prizes, fellowships, and two honorary doctoral degrees. He is the author of World War II: A Very Short Introduction.