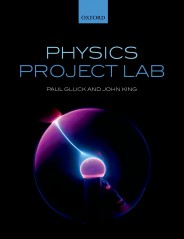 This book is the result of many years of experience of the authors in guiding physics projects. It aims to satisfy a deeply felt need to involve students and their instructors in extended experimental investigations of physical phenomena.

Over the next few weeks, Paul Gluck, co-author of Physics Project Lab, will be describing how to conduct various different Physics experiments. In his third post, Paul explains how to investigate and experiment with rubber bands…

Rubber bands are unusual objects, and behave in a manner which is counterintuitive. Their properties are reflected in characteristic mechanical, thermal and acoustic phenomena. Such behavior is sufficiently unusual to warrant quantitative investigation in an experimental project.

A well-known phenomenon is the following. When you stretch a rubber band suddenly and immediately touch your lips with it, it feels warm, the rubber band gives off heat.

Unlike usual objects, which expand when heated, a rubber band contracts when you heat it. To see this, suspend a rubber band vertically and attach a weight to it. Measure carefully its stretched length by a ruler placed along it. Now blow hot air on the rubber band from a hair dryer, thus heating it. Measure the new length and ascertain that the band contracted.

The behaviour is also strange when you try to see how the length of a rubber band depends on whether you load or unload it. To see this, suspend a rubber band, affix to its bottom a cup to hold weights, as shown.

Now increase the weights in the cup in measured equal increments, and for each weight measure the length, and the change in length from the unstretched state, of the rubber band by a meter stick laid along it.

For each weight, wait two minutes before the new length measurement Record your results. Now reverse the process: unload the weights one by one, and measure the resulting lengths.

For each amount of weight, will the rubber band have the same length when loading as when unloading? No, the behavior is much more subtle and is shown in the graph, in which one path results when loading, the other when unloading. This effect is known as hysteresis, and is related to energy losses in the band.

What happens to the sound of a plucked rubber band?

Unless you have perfect pitch and can detect small differences in pitch, you may need more sensitive means to detect the variations. One way is to have a tiny microphone nearby that will pick up the sound produced when you pluck the band. This sound is then passed on to a software (on the Web search for ‘free acoustic spectrum analyzer’) which analyzes the sounds and tells what frequencies are present in the plucking sound.

Finally, how does a flat thin rubber strip transmit light? Take a very thin flat rubber strip and start stretching it. Now shine a strong spotlight close to one side of the strip and measure the intensity of the light which is transmitted on to its other side, while the strip is stretched. You would expect that as the strip is stretched it becomes thinner so more light should get through, right? Wrong: for some region of stretching the transmitted light intensity may actually decrease.

If you have access to a physics lab and modern sensors you can set up an apparatus which will allow to explore in depth the whole range of phenomena to greater accuracy.

Have you tried this experiment at home? Tell us how it went to get the chance to win a free copy of the Physics Project Lab book! We’ll pick our favourite descriptions on 9th January.

Dr. Paul Gluck, received  his Ph.D at the University of London in Theoretical Physics. He currently holds a position as a lecturer at the Jerusalem College of Engineering and has previously held the role of Senior Lecturer in the department of Physics at the Bar-Ilan University, Israel as well as contributing to a variety of publications in Physical Science including his most recent collaboration with the late John King to produce Physics Project Lab.