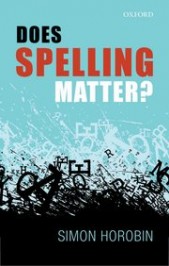 Now that Noughth Week has come to an end and the university Full Term is upon us, I thought it might be an appropriate time to investigate the arcane world of Oxford jargon — the University of Oxford, that is. New students, or freshers, do not arrive in Oxford but come up; at the end of term they go down (irrespective of where they live). If they misbehave they may find themselves being sent down by the proctors (a variant of the legal procurator), or — for less heinous crimes — merely rusticated, a form of suspension which, etymologically at least, involves being sent to the countryside (Latin rusticus). The formal beginning of a degree is known as matriculation, a ceremony held in the Sheldonian Theatre, in which membership of the university is conferred by being having one’s name entered on the register, or matricula.

Being a student of the university involves membership of one of the colleges or private halls; despite their names, St Edmund (Teddy) Hall and Lady Margaret Hall are actually colleges; Regent’s Park College is neither a college nor a park. Christ Church should be referred to simply as Christ Church, rather than Christ Church College, although it is also known as ‘the House’. Magdalen is pronounced ‘maudlin’ and should never be confused with another college of the same name at Cambridge University (affectionately known as ‘The Other Place’, originally a euphemism for hell), which is pronounced the same but spelled Magdalene.

Each college has a head of house, referred to by a variety of terms: Principal, President, Dean, Master, Provost, Rector, or Warden. Teaching in college takes the form of tutorials (or tutes), overseen by Colleges tutors (from a Latin word for ‘protector’); the earliest tutors were responsible for a student’s general welfare — a post now known as moral tutor. Colleges are governed by a body of fellows (students at Christ Church), or dons, from Latin dominus ‘master’. The title reader, a medieval term for a teacher used to refer to a lecturer below the rank of professor, has recently been retired at Oxford in favour of the American title associate professor.

At Oxford, students read rather than study a subject, a usage which goes back to the Middle Ages. Final examinations were originally known as Greats; this term is now used only of the degree of Literae Humaniores (‘more humane letters’) — Classics to everyone else. No longer in use is the equivalent term Smalls for the first year exams; these are now known as Moderations (or Mods) in the Humanities, or Preliminaries (or Prelims) in the Sciences. Sadly, the slang equivalents great go and little go have now fallen out of use. University examinations are sat in Schools, a forbidding edifice on the High Street (or ‘the High’) which gets its name from its original use for holding scholastic disputations. Students are required to wear formal academic dress to sit exams; this is known as subfusc, from Latin subfuscus ‘somewhat dark’.

College exams, rather less formal affairs, are known today as collections, from Latin collectiones, ‘gathering together’, so-called because they occurred at the end of term when fees were due for collection. Confusingly, the term collection is also used to refer to the end-of-term meeting where a progress report is read by a student’s tutor in the presence of the master of the college. As well as fees, students must pay their battels, a bill for food purchased from the College buttery — originally a wine store, from Latin butta ‘cask’, but now extended to include a range of student delicacies.

Lecturers dusting off their notes and preparing for the new term, for whom such usages are second-nature, may benefit from the salutary lesson of the wall-lecture —a term coined by their 17th-century forbears for a lecture delivered to an empty room. The term may be obsolete, but the prospect remains all too real.

Simon Horobin is Professor of English at the University of Oxford and a Fellow of Magdalen College. He is the author of Does Spelling Matter? and blogs at Spelling Trouble.