Buddhist metaphysics and modern symbolic logic might seem strange bedfellows. Indeed they are. The thinkers who developed the systems of Buddhist metaphysics knew nothing of modern logic; and the logicians who developed the panoply of techniques which are modern logic knew nothing–for the most part–of Buddhism. Yet unexpected things happen in the evolution of thought, and connections between these two areas are now emerging. (As I write this, I’m on a plane flying back to Germany from Japan, where I’ve been lecturing on these matters for the last two weeks in Kyoto University) Let me try to explain as simply as I can.

At the time of the historical Buddha, Siddhārtha Gautama, c. 5c BCE, a common assumption was that there are four possibilities concerning any claim: that it is true (and true only), that it is false (and false only), that it is both true and false, that it is neither true nor false. The principle was called the catuṣkoṭi (Greek: tetralemma; meaning ‘four points’ in English).

We know this because, in some of the sūtras, the Buddha’s disciples ask him difficult metaphysical questions, such as the status of an enlightened person after death: does the person exist, not exist, both, or neither? They clearly expect him to endorse just one of these possibilities.

Until recently, Western logicians have had a hard time making sense of this. Standard logic has assumed that there are only two possibilities, true (T) and false (F)–tertium non datur. In particular, there is nothing in the third koṭi (both true and false), and even if there were, it would be in the first two as well (true, and false). So the koṭis would not be exclusive.

To those who know a little modern non-classical logic, however, the matter is easy. There is a system of logic called First Degree Entailment (FDE). This is a four-valued logic whose values are exactly those of the catuṣkoti (t, f, b, and n). Standardly, they are depicted in a diagram as follows: 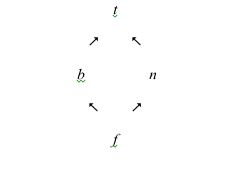 Given this ordering, the values interact with other standard machinery of logic, such as negation, conjunction, and validity.

Matters, however, don’t end there. The Buddha refused to answer such tricky questions. Some sūtras suggest that this was because it was simply a waste of time. Others hint at the possibility that sometimes none of the four koṭis may be the case.

And this is just what later metaphysics suggested. Nāgārjuna (dates uncertain, 1st or 2nd c. CE) is perhaps the greatest Buddhist philosopher after the Buddha. His Mūlamadhyamakakārika (Fundamental Verses of the Middle Way) was a text which was to exert a profound influence on all subsequent Buddhisms. And in this, he appears to say that some things are simply ineffable. The state of an enlightened person after death, for example, is such.

This adds a fifth possibility, i, which is none of the above. It is distinguished from the first four, in that if something, A, has the value i, so does any more complex sentence formed out of A. (If A is ineffable, so must this be.)

This still isn’t an end to the matter, however. For Nāgārjuna, and those who follow him, not only claim that some things are ineffable: they explain why they are so (roughly, these situations pertain to an ultimate reality, which is what remains after all conceptual–and therefore linguistic–imputations are “peeled off”). Clearly, speaking of the ineffable is a most paradoxical state of affairs. It would seem to show that some claims can take more than one of the five values, such as both t and i. (And lest it be thought that this is simply a feature of Eastern mysticism, one should note how many of the great Western philosophers have found themselves in exactly the same situation: Aristotle (prime matter), Kant (noumena), Wittgenstein (form, in the Tractatus), Heidegger (being).)

Again, modern techniques of non-classical logic can show how to make sense of this possibility. In standard logics, things take exactly one of whatever values are on offer. But in a construction called plurivalent logic, things can take more than one (maybe even less than one) such value. The plurality of values interact in a perfectly natural and sensible way with the other logical machinery.

What to make of these matters? Philosophers may certainly argue about this. (This, after all, is what philosophers love to do.) However, one thing is ungainsayable: Buddhist metaphysics and formal logic can profitably inform each other.

FDE was a system of logic known independently of Buddhist considerations. (It was developed in the 1960 and 70s in a branch of logic known as relevant logic.) But the development of the five-valued logic above, and plurivalent logics, were motivated, at least in part, by trying to make sense of the Buddhist picture. The metaphysics can therefore stimulate novel developments in logic—developments whose interest is not simply restricted to applications to Buddhist metaphysics.

Conversely, those with a suspicion of metaphysics in general and Eastern systems of metaphysics in particular, might be tempted to write off such enterprises as logically incoherent. They’re not. The techniques of modern logic certainly don’t show that these pictures of reality are true. However, they show that they’re as logically coherent as can be – and, moreover, they allow us to articulate the views with a precision and rigor hitherto unobtainable, and hence to understand them and their consequences better.

Buddhist views are not, of course, the only views that can work in this dialectical way. But because Buddhist views are little known in Western philosophy, they provide a particularly fruitful domain of inquiry.

And what would the Ancient Buddhist metaphysicians themselves have made of such developments in logic? We’ll never, of course, know; but my own guess is that they would have very much appreciated the enlightenment which such techniques can bring.

Graham Priest is Boyce Gibson Professor of Philosophy at the University of Melbourne and Visiting Professor at University of St Andrews. He is the author of Logic: A Very Short Introduction.