If you haul a bottlenose dolphin out of the water and onto the deck of your boat, something remarkable will happen. The panicked dolphin will produce a whistle sound, repeated every few seconds until you release her back into the water. If you record that whistle and compare it to the whistle of another dolphin in the same predicament, you’ll discover that the two whistles are different. In fact, every dolphin will have its own “signature” whistle that it uses when separated from her friends and family. 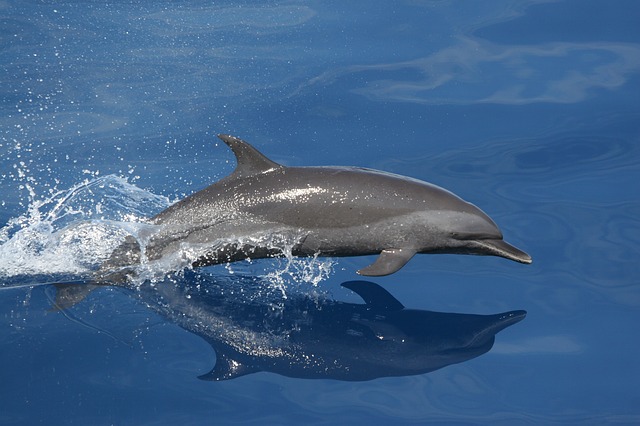 This was a discovery made back in the 1960s by Melba and David Caldwell, who also learned that dolphins are not born with a signature whistle, but develop it over the first year of their life. Young dolphins cobble their unique whistle pattern together from sounds they hear in their environment – perhaps basing them on their mother’s whistle, or even incorporating aspects of their trainers’ whistles if they happen to find themselves born in captivity.

Once created, a signature whistle typically remains stable throughout the dolphin’s life, making it easy for the whistler to convey her identity to anyone within earshot. So is it correct to suggest that these whistles are equivalent to “names” as we would understand them in human terms? That’s still a matter of debate.

To function like name-use in human language, dolphins would need to not just repeat their own name, but call out the names of other individuals in order to address them. Figuring out if dolphins do this has been the goal of Vincent Janik and his research group at the Sea Mammal Research Unit at the University of St. Andrews. Their latest peer-reviewed article, with lead author Stephanie King, has provided evidence that dolphins might in fact be capable of labeling each other in this manner.

For this study, boat-based researchers followed a group of bottlenose dolphins in the Moray Firth and St. Andrews Bay. Once it was established that the “owner” of one of the signature whistles the researchers had on file was in the group, that whistle was played back under water and the animals’ response was recorded. In eight out of the twelve cases where this was attempted, the “owner” responded by calling back with his/her own signature whistle. The conclusion was that the individual must have recognized his/her name, and that signature whistles therefore could “serve as a label for that particular individual when copied.”

This is an important finding for a few reasons. It is extremely rare for non-human animals to learn and then use a vocal label for things in their environment outside of an experimental setting. There are plenty of examples of animals like vervet monkeys or chickens that produce alarm or food calls that refer to objects and events, but these are hard-wired vocalizations the animals are born knowing. Dolphins, on the other hand, create their own vocalizations from scratch. They retain the ability to imitate sounds throughout their life – a skill that has been demonstrated both in the lab and in the wild. Only parrots have shown similar skill when it comes to acquiring vocal labels under experimental conditions. A handful of bird species are also quite flexible when it comes to developing and learning to use contact calls in the wild, and might occasionally imitate the unique calls produced by other birds. But where dolphins are concerned, everything seems to be in place to support the idea that a dolphin could learn their friends’ signature whistles, and shout out the “name” of another dolphin in order to get their attention.

But the results of this study are not exactly the smoking gun we need to establish that dolphins call each other by name.  In experimental contexts, we know dolphins can learn to label objects. In the wild, we now know that dolphins are capable of reacting to the use of their signature whistle by others. But for this scenario to truly be similar to name-use in human language, we will need reliable observations wherein a dolphin appears to intentionally shout out the name of one of its friends, followed by that friend responding in some relevant way (e.g., swimming over, or repeating his or the other dolphin’s signature whistle). This would be the next piece of the puzzle.

There is one finding that throws a small wrench in the works, however. At the moment, we know that dolphins rarely ever produce the signature whistles of their friends; they produce their own signature whistles almost 100% of the time. Habitually saying your own name is an odd behavior if indeed signature whistles are used by dolphins to address each other. It could be that they do regularly call each other’s names, but that scientists have just not had the right tools – or the right opportunity – to observe it. The St. Andrews group is certainly not slowing down when it comes to providing us with striking findings and innovative research techniques. So will they be the ones to find examples of dolphins addressing each other by name in the wild? I really hope so.

But if they don’t, I offer the following reason as to why not. Language is more than just labels for things. It is primarily a means for individuals to share their thoughts with other individuals. In order for language to function correctly, language users need to be acutely aware of what others are thinking – what they might know and what they might need to know. There is a lot of debate in the sciences as to the extent to which non-human animals are aware of both the contents of their own minds, and the contents of other minds. As smart as dolphins are, we still don’t know how advanced their own minds are where this is concerned. If it turns out that dolphins don’t in fact use signature whistles to get each other’s attention, it will not be because they don’t have signature whistles. They most certainly do. And it’s not because they aren’t intelligent. They most certainly are. It might instead be because they don’t fully grasp the kind of hierarchical understanding that goes into this kind of language-like exchange. For me to call your name in the context of a human conversation, I have to know that you know that Jim is your name. I also have to guess that you know that I know that you know that Jim is your name, which is why I am calling you Jim in the first place. This kind of understanding is not trivial. It is deeply complicated. And it is the key to transforming a signature whistle into a full blown name.

Justin Gregg is the author of Are Dolphins Really Smart? The Mammal Behind the Myth. He is a research associate with the Dolphin Communication Project. Follow him on Twitter @justindgregg or at his blog justingregg.com.

Animal of the month: an interactive experience with the eastern cottontail rabbit