Re-imagining Democracy in the Age of Revolutions

There are two different questions that might be asked about contemporary democracy: how did we get here?  And where else might we have tried to get? A great deal of the ‘history of democracy’’ is written in the former mode, with the classical world and subsequent periods being identified as steps in a path towards a modern democratic world in which the people elect their governments and hold them accountable to greater or lesser extents. In Britain, the normal staging posts identified are the Levellers, the 1790s, the Great Reform Act, and the suffragist movement. In America they are the Declaration of Independence in 1776, the Federal Constitution of 1788, Jacksonian Democracy in the 1830s, the Civil War, and the Voting Rights act of 1965. In France, the French Revolution, 1830, 1848, 1871, 1836, and 1944. Ireland has far fewer dates! 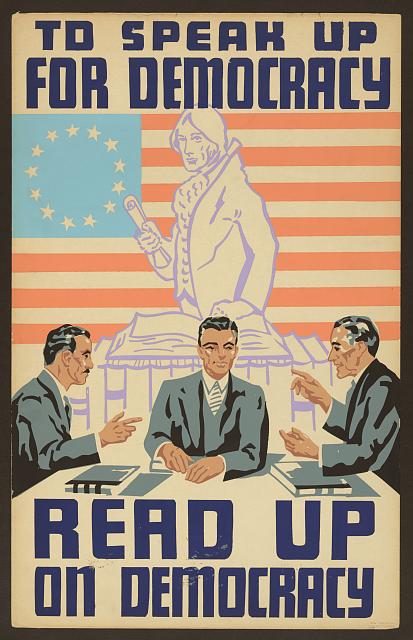 This sort of history is in effect being written backwards; it is a history of the present and how we got to it, not a history of the past, and what we might have fought for. One mark of this approach is that relatively little attention is given to the language people actually used; if we think their aspirations were democratic then it is assumed that we can describe their goal as democracy, even if they didn’t use the word. Moreover, since we link democracy to elections, we assume that the history of democratic aspiration was primarily a story of struggle over the suffrage. But much of this does violence to the evidence.

If we ask what people who wanted to put more power in the hands of ordinary men (or more rarely, women) thought that they were doing, and how they conceptualised their objectives and behaviour, we find that democracy came on to the scene as a popular term rather belatedly. Throughout the eighteenth century, it was a literate term, referring to ancient Greece and Rome, though also used by educated commentators to refer to small, faction-ridden, tumultuous states, prone to collapse under the influence of demagogues into despotism. Though they could imagine that modern states might, like Britain, have a relatively democratic component, few of those who knew the term thought that ‘democracy’ had any relevance to the growing commercial empires of late eighteenth-century Europe.

Yet, within a hundred years, democracy had become established as part of the political lexicon across the populations of America, France, Britain and Ireland. It was still widely condemned by many, who saw it as a force that threatened the social, economic and political order; but by 1848 it had established advocates, and more inspiring connotations. Even those who spoke of it with some trepidation saw it as a modern phenomenon, often as ineluctable, and as something to which the political order needed to adapt. Not only had the word acquired new significance and connotations, but also in different countries different meanings and institutions had come to be associated with it. In France, for instance, it had become identified with formal and to some extent real social levelling that political institutions had somehow to contain, whereas in Britain it was associated with active political struggles for more effective popular control of the House of Commons. In Ireland it was associated with mass mobilisations, designed to affect political agendas more than political institutions. In this process of re-imagining democracy many came to associate it with innovation, with new ideas, experiences and experiments, and saw new possibilities opened for them.  This is not a story of steady progress towards a determined goal: it remained uncertain how and even whether the people’s wish to share in the exercise of power could be given stable institutional form. Nor was it a story of steady progress towards any goal — the French Revolution did much to rendered the term anathema across Europe for more than twenty years. It is, however, an often surprising story. These four countries shared a classical inheritance and understandings of ‘democracy’ derived from that, but in responding to local experiences and conflicts, they developed sometimes strikingly different understandings and practices, and they differed too in what they arrayed under the banner of democracy as that came to be unfurled.

If we read the past wholly in the light of the present, then we also will read our futures in that way.  But if we recognise the foreignness of the past, and the very different ways in which people in different political settings responded to the pressures of social change and the emergence of more popular forms of politics at the end of the eighteenth and beginning of the nineteenth centuries, we may find ourselves able to ask questions of our present — and of our futures — that would not otherwise be asked.

Mark Philp and Joanna Innes are co-editors of Re-imagining Democracy in the Age of Revolutions: America, France, Britain, Ireland 1750-1850 (OUP, 2013). Mark Philp has taught political theory in Oxford University for thirty years and has worked extensively on the political thinking and social movements of the late eighteenth and early nineteenth centuries in Britain, and on methodological approaches to the study of political ideas. Joanna Innes was educated in Britain and the United States. She has taught and researched at Oxford University for thirty years. Her interest in this subject grows out of her interest in government and political culture in Britain and elsewhere, especially during the eighteenth and early nineteenth centuries.