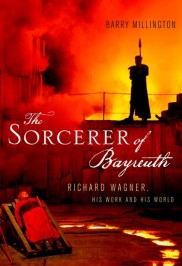 The Sorcerer of Bayreuth

Few composers embrace such a span of disciplines — musicological, philosophical, historical, political, philological — as Richard Wagner. To what extent does the wide-ranging, comprehensive nature of Wagner’s works militate against a true understanding of them? How close are we, in his bicentenary year, to an understanding that does them justice? The following illustrations from The Sorcerer of Bayreuth: Richard Wagner, his Work and his World demonstrate the variety of perspectives on Wagner, from outdated stereotypes to new reappraisals.

Barry Millington is chief music critic for the London Evening Standard and the editor of The Wagner Journal. He has written and edited, or co-edited, seven books on Wagner, including The Sorcerer of Bayreuth: Richard Wagner, his Work and his World (2013), The Wagner Compendium (1992), The Ring of the Nibelung: A Companion (1993), and the New Grove Guide to Wagner and his Operas (2006). In addition to his writing, he has also acted as dramaturgical adviser to several international music festivals.