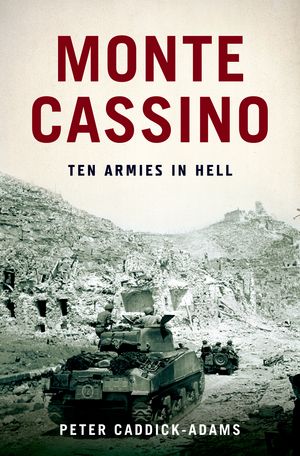 On the 15th of February 1944, Allied planes bombed the abbey at Monte Cassino as part of an extended campaign against the Axis forces. St. Benedict of Nursia established his first monastery, the source of the Benedictine Order, here around 529. Over four months, the Battle of Monte Cassino would inflict some 200,000 causalities and rank as one of the most horrific battles of World War II. This excerpt from Peter Caddick-Adams’s Monte Cassino: Ten Armies in Hell, recounts the bombing.

On the afternoon of 14 February, Allied artillery shells scattered leaflets containing a printed warning in Italian and English of the abbey’s impending destruction. These were produced by the same US Fifth Army propaganda unit that normally peddled surrender leaflets and devised psychological warfare messages. The monks negotiated a safe passage through the German lines for 16 February — too late, as it turned out. American Harold Bond, of the 36th Texan Division, remembered  the texture of the ‘honey-coloured Travertine stone’ of the abbey that fine Tuesday morning, and how ‘the Germans seemed to sense that something important was about to happen for they were strangely quiet’. Journalist Christopher Buckley wrote of ‘the cold blue on that late winter morning’ as formations of Flying Fortresses ‘flew in perfect formation with that arrogant dignity which distinguishes bomber aircraft as they set out upon a sortie’. John Buckeridge of 1/Royal Sussex, up on Snakeshead, recalled his surprise as the air filled with the drone of engines and waves of silver bombers, the sun glinting off their bellies, hove into view. His surprise turned to concern when he saw their bomb doors open — as far as his battalion was concerned the raid was not due for at least another day.

Brigadier Lovett of 7th Indian Brigade was furious at the lack of warning: ‘I was called on the blower and told that the bombers would be  over in fifteen minutes… even as I spoke the  roar  [of  aircraft] drowned my voice as the first shower of eggs [bombs]  came down.’ At the HQ of the 4/16th Punjabis, the adjutant wrote: ‘We went to the door of the command post and gazed up… There we saw the white trails of many high-level bombers. Our first thought was that they were the enemy. Then somebody said, “Flying Fortresses.” There followed the whistle, swish and blast as the first flights struck at the monastery.’ The first formation released their cargo over the abbey. ‘We could see them fall, looking at this distance like little black stones, and then the ground  all around  us shook with gigantic shocks as they exploded,’ wrote Harold  Bond. ‘Where the abbey had been there was only a huge cloud of smoke and dust which concealed the entire hilltop.’ The aircraft which committed the deed came from the massive resources of the US Fifteenth and Twelfth Air Forces (3,876 planes, including transports and those of the RAF in theatre), whose heavy and medium bombardment wings were based predominantly on two dozen temporary airstrips around Foggia in southern Italy (by comparison, a Luftwaffe return of aircraft numbers in Italy on 31 January revealed 474 fighters, bombers and reconnaissance aircraft in theatre, of which 224 were serviceable). Less than an hour’s flying time from Cassino, the Foggia airfields were primitive, mostly grass affairs, covered with Pierced Steel Planking runways, with all offices, accommodation and other facilities under canvas, or quickly constructed out of wood. In mid-winter the buildings and tents were wet and freezing, and often the runways were swamped with oceans of mud which inhibited  flying. Among the personnel stationed there was Joseph Heller, whose famous novel Catch-22 was based on the surreal no-win-situation chaos of Heller’s 488th Bombardment Squadron, 340th Bomb Group, Twelfth Air Force, with whom he flew sixty combat missions as a bombardier (bomb-aimer) in B-25 Mitchells.

After the first wave of  aircraft struck Cassino monastery, a Sikh company of 4/16th Punjabis fell back, understandably, and a German wireless message was heard to announce: ‘Indian troops  with turbans are retiring’. Bond and his friends were astonished when, ‘now and again, between the waves of bombers, a wind would blow the smoke away, and to our surprise we saw the gigantic walls of the abbey still stood’. Captain Rupert Clarke, Alexander’s ADC, was watching with his boss. ‘Alex and I were lying out on the ground about 3,000 yards from Cassino. As I watched the bombers, I saw bomb doors open and bombs began to fall well short of the target.’ Back at the 4/16th Punjabis, ‘almost before the ground ceased to shake the telephones were ringing. One of our companies was within 300 yards of the target and the others within 800 yards; all had received a plastering and were asking questions with some asperity.’ Later, when a formation of B-25 medium bombers passed over, Buckley noticed, ‘a  bright  flame, such  as a  giant  might have produced by striking titanic matches on the mountain-side, spurted swiftly upwards at half a dozen points. Then a pillar of smoke 500 feet high broke upwards into the blue. For nearly five minutes it hung around the building, thinning gradually upwards.’

Nila Kantan of the Royal Indian Army Service Corps was no longer driving trucks, as no vehicles could get up to the 4th Indian Division’s positions overlooking the abbey, so he found himself portering instead. ‘On our shoulders we carried all the things up the hill; the gradient was one in three, and we had to go almost on all fours. I was watching from our hill as all the bombers went in and unloaded their bombs; soon after, our guns blasted the hill, and ruined the monastery.’ For Harold Bond, the end was the strangest, ‘then nothing happened. The smoke and dust slowly drifted away, showing the crumbled masonry with fragments of walls still standing, and men in their foxholes talked with each other about the show they had just seen, but the battlefield remained relatively quiet.’

The abbey had been literally ruined, not obliterated as Freyberg had required, and was now one vast mountain of rubble with many walls still remaining up to a height of forty or more feet, resembling the ‘dead teeth’ General John K. Cannon of the USAAF wanted to remove; ironically those of the north-west corner (the future target of all ground assaults through the hills) remained intact. These the Germans, sheltering from the smaller bombs, immediately occupied and turned into excellent defensive positions, ready to slaughter the 4th Indian Division when they belatedly attacked. As Brigadier Kippenberger observed: ‘Whatever had been the position before, there was no doubt  that the enemy was now entitled to garrison the ruins, the breaches in the fifteen-foot-thick walls were nowhere complete, and we wondered whether we had gained anything.’

Peter Caddick-Adams is a Lecturer in Military and Security Studies at the United Kingdom’s Defence Academy, and author of Monte Cassino: Ten Armies in Hell and Monty and Rommel: Parallel Lives. He holds the rank of major in the British Territorial Army and has served with U.S. forces in Bosnia, Iraq, and Afghanistan.