While most people are getting excited for the start of awards season on Sunday with the Golden Globes, the season has just ended for word nerds. From November through January, the Word(s) of the Year announcements are made. I’ll let you decide who is the Golden Globes, BAFTAs, SAGs, National Film Critics Circle, etc. of the lexicography community. Just remember YOLO — because it appeared on every list. 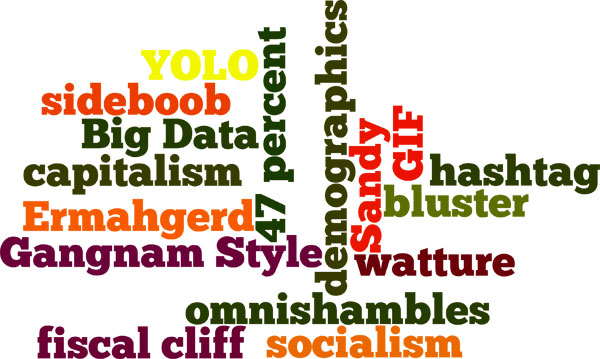 Oxford Dictionaries was first off the mark with omnishambles for the UK and GIF (verb) for the USA respectively. (13/11)

Marc Weisblott appears to be the only person who put forth suggestions for Canada’s Word of the Year. (13/11)

Dictionary.com chose bluster for the combination of its political and meteorological uses. (19/11)

Dennis Baron of Web of Language and A Better Pencil chose #hashtag. (02/12)

Merriam-Webster chose two Words of the Year: socialism and capitalism. (05/12)

Huffington Post selected sideboob given its prevalence in their coverage this year. (06/12)

Zoë Triska of Huffington Post hates YOLO. I’m getting the impression everyone does. (10/12)

Nancy Friedman (aka Fritinancy) had a list of 14 WOTY words and is I believe the only person to include Ermahgerd. (12/12)

Australian National Dictionary Centre’s Word of the Year 2012 was green-on-blue: (used in a military context) an attack made on one’s own side by a force regarded as neutral. (13/12)

Khaya Dlanga made some suggestions for South Africa’s Word of the Year. (13/12)

Collins Dictionary selected 12 words of the year (one for each month) including Gangnam Style, 47 percent, and Romneyshambles. (20/12)

Vlae Kershner and the readers of SFGate selected fiscal cliff. (20/12)

Lake Superior State University released their annual list of words that should be banished in 2013. (31/12)

The American Name Society chose Sandy as their name of the year. (04/01)

And finally, the American Dialect Society Word of the Year is… hashtag. Check out Ben Zimmer’s recap of the process (unfortunately not in GIF form, #disappointed). (04/01)

The Macquarie Dictionary Word of the Year (Australia) has yet to be announced, but I can contain WOTY no longer.

Please let me know if I missed any other WOTYs in the comments below, and your suggestions for which dictionary or person is which film awards ceremony and why.

Lost for words? Introducing Oxford’s “Words of an Unprecedented Year”