Fowl, fox, and pooch. My cautious reservations about a tie between the etymon of fowl and the verb fly were dismissed in one of the comments. Therefore, a few additional notes on that word may be in order. The origin of fowl is uncertain, that is, controversial, not quite unknown. In Friedrich Kluge’s lifetime ten editions of his German etymological dictionary came out. In the first three, he said that fowl and fly (he of course dealt with German Vogel and fliegen) had apparently been connected for good reason (nicht ohne Grund). In the next two editions, for good reason was replaced with perhaps (vielleicht). In the sixth edition (1899), we find more likely (wahrscheinlicher) instead of perhaps. By 1899 Kluge had read an important article, to which he referred, and felt convinced that fowl was related to some words outside Germanic (such words in Lithuanian and Sanskrit mean “bird’s down” and “bird”). No new revisions of this entry followed.

During the last years of his life Kluge was blind. He bequeathed his work to his amanuensis Alfred Götze, who became the editor of the next edition. Götze removed the Lithuanian example but left the rest of Kluge’s text intact, except that instead of more likely he wrote some people think (man denkt). In the excellent dictionary, known as Weigand-Hirt, the editor (Herman Hirt) featured the Sanskrit word and cited both hypotheses as equally probable. Walther Mitzka, the next editor of Kluge, advocated the fowl-fly connection. After his death the dictionary became Elmar Seebold’s responsibility. Seebold believes in the Indo-European provenance of fowl, and, as a result, the exiled bird from Lithuania has reemerged. But his predecessors thought that fowl had originally meant “feathered creature,” while Seebold derives the word from the root pu-, used for naming baby animals. His idea is also far from original; it first surfaced in 1913.

I have told this long story to make two things clear. First, anyone interested in etymology should remember that dictionaries, unless they unfold the entire panorama of conjectures and reasoning, reflect not the truth (which is often hidden) but their editors’ opinions, and opinions tend to change. Second, it is better not to insist on any of the existing etymologies of fowl, because the facts at our disposal can be interpreted in more ways than one. Skeat, in the first edition of his English etymological dictionary (1882), made the fatal mistake of saying that fuglaz, the reconstructed etymon of fowl, certainly arose by dissimilation for fluglaz (even the idea of dissimilation was called into question by those who accepted this etymology). When you study word origins, unless the question is trivial, never say certainly or undoubtedly! In Skeat’s last edition (1910), the verdict is short but not sweet: “Origin unknown.” Incidentally, the fuglas ~ fluglaz idea belongs to Eberhard G. Graff, whose dictionary of Old High German was appearing in installments between 1834 and 1846 (thus, decades before Kluge), and it found the support of such great scholars as Franz Bopp and Lorenz Diefenbach. And where is this idea now? Seebold does not even mention it!

There are other hypotheses on the origin of fowl, but we can do without them, because I have my own ax (or rather a small hatchet) to grind. If fowl goes back to an Indo-European root beginning with pu– (naturally, Germanic f corresponds to non-Germanic p), it may be akin to fox (Gothic fauho, pronounced foho): compare Sanskrit púcchas “tail, hind part” and Russian pukh “fuzz, down”). Fox would then emerge as an animal with a bushy tail, and fowl as a creature with a lot of down, fuzz, or fluff. As could be expected, other scholars suggested other connections: fox as an animal with a strong smell, and so forth. I am sure that, if foxes could understand comparative linguistics, they would have endorsed the proximity between their kind and fowl. 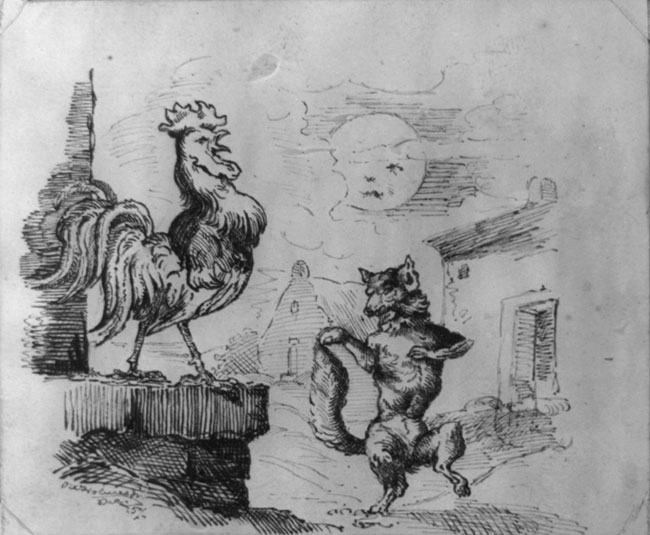 Now, one of our correspondents wonders whether pooch “dog” can be traced to the Sanskrit root mentioned above. I am afraid it cannot. The origin of most words designating “dog” is obscure (such are Engl. hound, Russian sobaka, and dog itself). Pooch is an early twentieth-century noun of seemingly American descent. Why should it have Sanskrit lineage? All the dictionaries I have consulted call pooch a word of unknown origin, while the Internet is full of dubious proposals. I also have a conjecture, admittedly, not a great one, but etymological beggars can’t be choosers.

It will be remembered that some scholars traced the Indo-European word for “baby animal” to the root pu-. Such roots tend to be recreated from one century to another. They have a vague sound symbolic value and are prone to self-generation. Pu– conjures up an image of something swelling or round. Although the idea underlying it may be vague, if we look at puppy, puppet, poppet “small person,” popsy–wopsy (a term of endearment for a girl), Winnie-the Pooh, and the beginning of such words as poodle, pudding, puddle, pug (originally another term of endearment, later “dwarf breed of a dog,” in addition to other senses), and many others, pooch will no longer appear isolated. I suggest that pooch is an emotional, expressive, slightly jocular word, part of the Pooh, pup-popsy-(poop)-pug group, that is, “doggie,” the more so as a pooch is usually a small dog.

Awning and aulnage; tarp. This was a most interesting comment, but it did not take me by surprise, because, after I read Skinner’s etymology of awning, I looked up a(u)ln– words in the OED and ran into aulnage and aulnager. Aulnage~ alnage referred to the measurement by the ell, and aulnager ~ alnager was a sworn officer appointed to examine and attest the measurement and quality of woolen goods. For a moment I also thought that Skinner had guessed the truth, but second thoughts prevailed. An etymologist’s first thoughts usually pertain to semantics, but then comes a phonetic hangover.

Aulning does not seem to have ever been spelled without an l. By contrast, awning never had an l in the middle. The group ln is rare in English. When it is simplified, it loses n. The examples are mill (from myln, from mylen) and kiln, pronounced, according to dictionaries, as kil by professionals dealing with such furnaces. Only in shaln’t and woln’t (shan’t and won’t) was l shed before n, but that happened in a combination of three consonants. It is anybody’s guess whether some speakers identified awning with aulnage. And I fully agree with our other correspondent who noted that, if tarpaulin had dropped out of the language and only its modern form tarp had stayed, no scholar would have been able to guess its origin. We often see such stubs and wonder what the trunk looked like.

Bald “hairless.” Bald eagle is not the only bird name with bald. German examples also exist, and English dialectal ball-faced “white-faced,” not “clean-shaven,” among others, reveals the older sense of the root.

Hoity-toity. Can it go back to French haut tout “all high”? To my mind, the chance is small for three reasons. The verb hoit “indulge in riotous and noisy mirth; move clumsily” looks like a better etymon for hoity (the adverb all-ahoit has also been attested). Higty-tighty, a variant of hoity-toity, may have been the original form of the word (if so, hoity-toity is a dialectal pronunciation of highty-tighty), though, to be sure, they may be independent variants. Finally, does the French locution haut tout “frolicsome behavior” exist?

More tidbits. Lie—lay—lain, lay—laid—laid, and lie—lied—lied. Since lay has ousted lie and we now lay down and have a rest, the process left some people profoundly confused. For the following piece I am again indebted to Walter Turner. (From the website of the Chicago Tribune): “I thought he was dead,” XX told the Dispatch. “When I dropped him into the water, he just lied there for a few seconds, but then he did a twist and shot off into the water.”

A well-known local variant but still amusing. “My mother taught me to dance with the one that brung you, and the voters brung me here,” said Rep. XX, R-Texas, one of the new freshmen who strongly opposed the Mexican aid. (Thus, sing—sang—sung and bring—brang—brung.)

Adverbialitis. XX and YY have been indicted by a federal grand jury on charges of possessing an extremely lethal poison for use as a weapon.” Even good dictionaries now give “causing great harm” as one of the senses of lethal, but lethal means or at least is supposed to mean “deadly, mortal,” and extremely lethal is a cousin of very unique, a great favorite with undergraduate students.

An exercise in rhetoric. “Why the political press raiseth up only to taketh down, and vice versa, is a matter of speculation.” The author of the newspaper article (a distinguished journalist and writer) decided to flaunt his knowledge of the Bible and, in so doing, produced a beautiful infinitive, to taketh. This is what I call screwing the pooch.