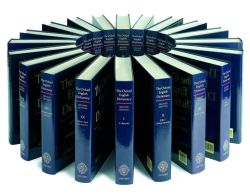 The Oxford English Dictionary (OED) is widely regarded as the accepted authority on the English language. It is an unsurpassed guide to the meaning, history, and pronunciation of 600,000 words— past and present—from across the English-speaking world. As a historical dictionary, the OED is very different from those of current English, in which the focus is on present-day meanings. You’ll still find these in the OED, but you’ll also find the history of individual words, and of the language—traced through 3 million quotations, from classic literature and specialist periodicals to films scripts and cookery books. The OED started life more than 150 years ago. Today, the dictionary is in the process of its first major revision. Updates revise and extend the OED at regular intervals, each time subtly adjusting our image of the English language.

On this day in 1959, a nightclub opened its doors in the quiet city of Aachen, West Germany, and a small revolution in music took place. The Scotch-Club was similar to many restaurant-cum-dancehalls of the time, with one exception: rather than hire a live band to provide the entertainment, its owner decided instead to install a record player.  The immediate effect on the clientele was anticlimactic, and the innovation might have failed altogether, had it not been for a young reporter who was covering the opening night. Fuelled by whiskey, Klaus Quirini impulsively stepped up to the decks and galvanized the bored crowd by selecting and introducing each of the records. In doing so, he later claimed to have become the world’s first ever nightclub DJ.

More interestingly, the Scotch-Club appears to be one of the earliest recognisable examples of a modern disco. There were DJs before, of course—evidence for the terms disc jockey, deejay, and DJ goes back to radio presenters of the early 1940s—but Quirini’s quick-thinking located the activity on the dancefloor in a new form of venue-specific, DJ-mediated live entertainment.

Discotheque entered the English language at around the same time that the Scotch-Club was refining the concept. There were discothèques before 1959, but of a different sort: the word is a borrowing from French meaning a ‘library of phonograph records’, formed after bibliotheque. This was already current in English in the 1950s, and the French version was being used as a proper name by various nightclubs in Paris, where dancehalls had resorted to playing records publicly as a result of restrictions imposed during Nazi occupation in the early ‘40s. The name naturally became associated with the actual venues themselves, and the English sense of ‘a nightclub’ arrives in this context in a 1960 magazine article about the Left Bank:

1960 Atlantic Sept. 46/2 Since this is a discothèque, jazz is blaring from the walls and record sleeves are scattered about.

New words often inspire a period of heady inventiveness during their first surge of popularity, and people were quick to play with discotheque. In America, where Parisian style dominated the haut monde, it was immediately compounded by the press, who raved about the European discotheque trend for discotheque dancing. The world of fashion was particularly taken, one newspaper coining a rare adjective to describe a racy see-through outfit as ‘definitely discotheque’. 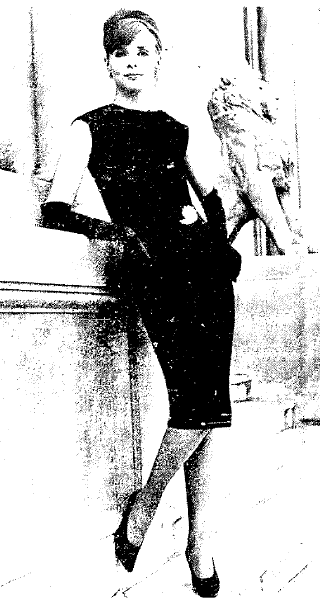 Then, in the summer of 1964, a short sleeveless dress known as the discotheque dress enjoyed a brief craze. It was designed to allow freedom of movement while dancing (ideally in sultry Left Bank clubs), and for a brief moment, before the ‘nightclub’ sense of the word prevailed, the dress itself was simply called a discotheque:

1964 Oakland (California) Tribune 9 July The best little discotheque we have yet seen is in the Miss Troy collection.

Which raises the intriguing possibility that for a short time in the early sixties, women might have gone out to dance in discotheques wearing discotheques.

This curious double meaning is a good example of the sort of excited confusion that can attend the birth of a new word, when various usages jostle for attention. Adding to the mix was the coincidental shortening of discotheque to disco, so that the discotheque dress correspondingly slimmed down to both disco dress and disco—especially among the ‘fashion-hep’ (or ‘hip’):

1964 Salt Lake (Utah) Tribune 12 July 4w/3 The ‘disco’ to the fashion-hep means a short, bare-topped dress whose main ingredient is that it must swing.

Swinging into view in this form, it provides the earliest evidence yet found for our word disco, and it isn’t until two months after this quote that the sense of ‘a nightclub’ is attested:

1964 Playboy Sept. 56/2 Los Angeles has emerged with the biggest and brassiest of the discos.

So, was a disco really a dress, before it was a nightclub? This isn’t such an incredible idea: the term discotheque dress is cumbersome and benefits from abbreviation, so it’s plausible that it inspired the simplified disco dress, which went on to influence a more general use of disco. But this progression seems overly deliberate. It’s far more likely that there is undiscovered evidence out there somewhere for disco being used to mean ‘a nightclub’ before it meant ‘a dress’.

Editors at the OED think so, too. We’ve featured disco as part of OED Appeals—a new initiative to involve the public in tracing the history of words—in the hope that someone might be able to help solve the problem.

Denny Hilton is a senior assistant editor at the Oxford English Dictionary. If you can help, visit: www.oed.com/appeals. Read more about the history of OED Appeals here.

On getting in (and out of?) scrape