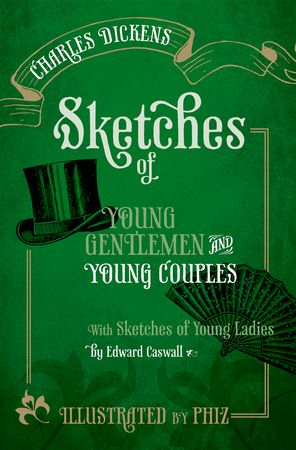 Each volume purports to dissect the characteristics of familiar types such as “The Bashful Young Gentleman,” “The Literary Young Lady,” and “The Couple who Coddle themselves.” Whimsical, satirical, witty and exuberant, the sketches ridicule the behaviour of their subjects with perfect comic effect, rendering Mr Whiffler, Mrs Chopper and their companions instantly recognizable. They offer intriguing glimpses of courtship rituals and relations between the sexes at the outset of the Victorian era, and fascinating evidence of a writer learning his craft and refining his style. Here, we’ve excerpted two of our favourite extracts: “The Loving Couple” and “The Formal Couple.”

Let all couples, present or to come, therefore profit by the example of Mr. and Mrs. Leaver, themselves a loving couple in the first degree.

Everything with the formal couple resolves itself into a matter of form. They don’t call upon you on your account, but their own; not to see how you are, but to show you how they are: it is not a ceremony to do honour to you, but to themselves, – not sue to your position, but to theirs. If one of a friend’s children die, the formal couple are as sure and punctual in sending to the house as the undertaker … If the formal couple have a family (which they sometimes have), they are not children, but little, pale, sour, sharp-nosed men and women; and so exquisitely brought up, that they might be very old dwarfs for anything that appeareth to the contrary. Indeed, they are so acquainted with forms and conventionalities, and conduct themselves with such strict decorum, that to see the little girl break a looking-glass in some wild outbreak, or the little boy kick his parents, would be to any visitor an unspeakable relief and consolation.

These extracts are taken from Charles Dickens’ Sketches of Young Gentlemen and Young Couples, edited by Paul Schlicke. Paul Schlicke is Honorary Senior Lecturer at University of Aberdeen. For Oxford World’s Classics he has introduced and annotated Hard Times and Nicholas Nickleby. He was President of the Dickens Society of America in 1994, President of the Dickens Fellowship 2003-5, and Chairman of the Board of Trustees of the Charles Dickens Museum, 2005-9.