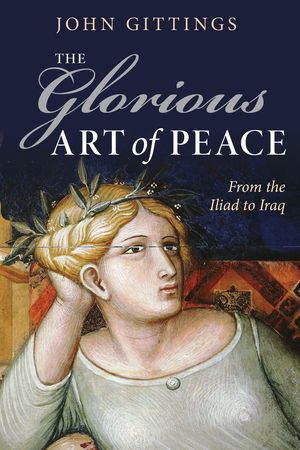 The Glorious Art of Peace: From the Iliad to Iraq

This year we shall recall, with a very nervous shudder, the 50th anniversary of the greatest crisis in the Cold War – and with the knowledge that but for good fortune none of us would be here to recall it at all. The Cuban missile crisis (October 1962) brought the world to the edge of a nuclear precipice.  “We came very close,” the US defence secretary Robert McNamara would remember, “and in the end we avoided nuclear war solely because we were lucky.” As the Soviet deputy premier Anastas Mikoyan also observed, both the US and the Soviet Union had been “on the verge of a Third World War.” Yet I can predict that some influential voices, as we approach the anniversary date of the Cuban crisis this October, will present it in a rather different light, downplaying the danger that it might have got so catastrophically out of hand and stressing the rationality of the decisions taken by John Kennedy and Nikita Khrushchev, the two superpower leaders of the time, in leading the world back from the brink. In the view of US military historian Philip Bobbitt, the crisis showed that nuclear war was too risky: disputes had to be settled by negotiation. Or, as Steven Pinker puts it in his new book arguing that the world has become a less violent place, the two Ks “reflected on their mutual need to sace face and set that up as a problem for them to solve.”  There is something in this argument but it tends to lead to the false proposition that because nuclear war did not happen in the Cuban crisis, it could not have happened.

There is another reason why some Western politicians and academics give the Cuban crisis the benefit of the doubt, denying how close we came to annihilation. To admit that this supreme crisis could have destroyed us all would be to undermine post-Cold War “neo-realist” wisdom, that the eventual collapse of the Soviet Union and its client states in Eastern Europe proved that “the West” had been right all along in maintaining nuclear superiority until it “won the cold war.”

Let us review some basic facts. Attempting to redress the strategic balance between the Soviet Union and the US – that the Soviet Union was far weaker in terms of nuclear missiles and their deployment – Khrushchev sought to deploy medium-range missiles secretly on the island of its new ally Cuba. The argument that Khrushchev was really trying to defend revolutionary Cuba from the US is weak and has been dismissed by Fidel Castro himself who would have preferred a simple Soviet-Cuban defence treaty to guarantee his security. When the US discovered the ruse, before the missile deployment was complete, Kennedy decided that they would have to be removed.

Fortunately for us, he rejected calls from the US military – and some civilian hawks – for immediate military action. (Thomas Power, commader-in-chief of the US Supreme Air Command, believed that “the only way to deal with these [Soviet] barbarians is to blow them all up.”) Fortunately too, Khrushchev realised that he had blundered and signalled his desire for a compromise by refusing – unlike the US – to put his strategic forces on war alert. After a tense thirteen days of crisis, he agreed to withdraw the missiles, under some form of inspection, while Kennedy guaranteed not to invade Cuba in the future and (secretly) to withdraw US missiles from Turkey where they were aimed against Soviet targets.

But it was a closely run affair, with the danger that miscalculation or accident might precipitate nuclear war at any moment. The US didn’t realise that some Soviet missiles were already in place: their commander had been ordered to be ready, on a signal from Moscow, “to deliver a nuclear strike against the most important targets of the US.”  Nor did the US realise that Soviet submarines in the area carried nuclear weapons; when one of them was harassed by an American plane, the commander had to be dissuaded by fellow-officers from launching a missile. Escalation would have caused a global disaster. By the end of the crisis the US had nearly 2,000 launchers capable of delivering over 7,000 megatons ready for combat.

The resolution of the Cuban crisis did produce a new US-Soviet understanding for a while, which led to the conclusion of the partial Nuclear Test-Ban Treaty of 1963. But the  chance of a real breakthrough faded after the assassination of Kennedy and the removal of Khrushchev – in large part because of his “adventurist” gamble in Cuba.  The US success had also left the Russians smarting; as one Soviet diplomat commented, “you Americans will never be able to do this to us again.” Moscow’s determination to catch up with the US would lead both sides to redouble the nuclear arms race in the late 1970s and ‘80s.

The real lessons of the Cuban crisis have still to be learnt. First, we should ask why the Cold War was still so intense, a decade and a half after it began, in spite of the death of Stalin and attempts at a thaw in the mid-1950s. Significant opportunities for a breakthrough between Washington and Moscow (and also between the US and Mao’s China) were missed; these have only begun to be the subject of research in recent years. The answer may lie in the judgement by Arthur Schlesinger, the historian and special adviser to Kennedy, that the prevailing theology of the Cold War led to “not an interest in negotiations but to a demand for capitulation.” Are we not in danger of making the same mistake today by defining a new war against terrorism rather than tackling and seeking to resolve its underlying causes?

The second lesson of the Cuban crisis is a very simple one. Nuclear weapons are supremely dangerous, the Cold War which justified their possession in conventional deterrence theory is long over, and yet the established nuclear powers have made no serious effort to move towards a nuclear-free world, while more countries have entered the club. Banning the bomb should not just be a nostalgic slogan of the 1960s but a top priority for disarmament negotiations today.

John Gittings worked at The Guardian (UK) for twenty years as assistant foreign editor and chief foreign leader-writer. He is on the editorial team of the new Oxford International Encyclopedia of Peace (2010) and is author of The Glorious Art of Peace: from the Iliad to Iraq (2012).