Charles Dickens was born 200 years ago this week, but he is very much alive in our culture, having become associated with two ways of seeing the world: “Dickensian” is now shorthand for filthy urban misery, but it is also linked to domestic bliss, the cozy armchair with the rubicund host, the plump goose and the fragrant, steaming punch. The man whose attack on the workhouses has resonated for two centuries is the same man who popularized the modern Christmas.

Interestingly, these two modes are linked by their obsession with (of all things) garbage. The dirt of Victorian London needs no introduction. In Bleak House, the homeless illiterate Jo is a street sweeper, spending his days trying to push back a tide of pestilent mud, horse droppings, ashes, decayed cats. Our Mutual Friend famously centers on three giant mounds of dust. But how was rubbish enshrined in the domestic home?

The answer is that one of the most important values in Victorian domestic organization was the recycling of detritus, and Dickens recognized that. In Our Mutual Friend, the villains steal waste products — they ransack corpses, they try to take the Mounds — but the good characters turn those products into delightful artifacts. Jenny Wren is a dolls’ dressmaker, buying shreds of waste cloth, ribbon ends, and damaged beads, and snipping them into costumes. Mr. Venus articulates skeletons, wiring dusty bones and stray teeth together to make his art. 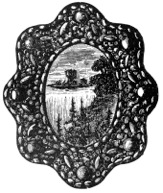 Jenny and Mr. Venus are professionals, but their first readers loved them because they are participating in one of the most popular amateur pursuits in the nineteenth century. Victorian domestic handicrafters were urged to glue plum pits to mirrors, to melt leftover candle ends to cover plaster statuettes, to varnish scraps of leather to resemble wood. They exulted in turning household waste into decorative spectacles to prove their managerial skill. In this way, Victorian women could emulate industrial production, making it very different from modern crafts, which embrace an ethos of handmade uniqueness. Just as factories took in raw materials like dead horses or coal, turning out other products, so too did craftswomen process the debris of the home. They had no interest in learning age-old artisanal traditions; rather, they wanted to prove themselves participants in modernity.

For instance, one popular craft involved turning fish scales into homemade sequins: soaking the scales, snipping them with special tiny shears, and piercing them with a needle, before sewing them onto silk. The pleasure in the fish-scale craft came from the creative recycling of trash, and the sense that one could make something as well as a machine did. To churn out identical, swift copies of objects, using premade kits and instructions from mass-circulation magazines and pamphlets, was to reach this ideal.

Handicraft fulfilled other goals, some of them contradictory. Handicraft, for instance, was usually temporary; made of homemade paste and bits of paper, it was designed to fall apart so the maker would have an excuse to bring in something new. For craft was seen as a fashion, to be updated frequently, not as a timeless piece of art. 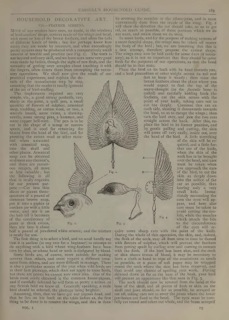 On the other hand, handicraft had a strong preservationist impulse. Victorians loved shaping fruit out of wax, arranging dried flowers or seaweed, sealing organic materials beneath shellac, even creating hair jewelry, because it demonstrated a triumph over nature. In 1877, Cassell’s Household Guide instructed readers to lay out a dead pigeon, scoop out its brains, cut out its eyeballs and ears, sever its neck, scrape away the flesh on its skull, and skewer its eyelids (instructions that should put an end to any consideration of the Victorian lady as prudish). Like fish-scale embroidery, taxidermy was a hobby that seemed to overcome decay.

These were the kinds of objects Charles Dickens adored. Our Mutual Friend features Bella’s dream home with the stairs wreathed in flowers, Mrs. Boffin’s “fashionable” room with its stuffed birds and wax flowers under glass. The prospect of triumphing over decay by permanently preserving fleeting beauty — flowers and birds and fruit — enchanted Dickens. It’s understandable. After all, as someone responsible for immense quantities of printed matter, he may have had a personal anxiety about the prospects of his work when he described the paper trash blowing everywhere in London: “it hangs on every bush, flutters in every tree, is caught flying by the electric wires, haunts every enclosure.” 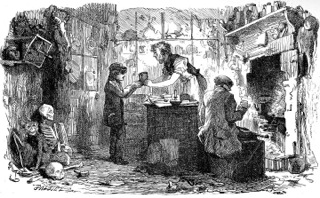 Perhaps this anxiety explains why the emblem of Dickens himself in this novel is a taxidermist, not a writer. Dickens, like Mr. Venus, aims to reassemble dry bones into a simulacrum of a person. For Dickens, too, “articulates” his characters out of fragments. Mr. Venus, like Dickens, tries to build them to last.

In the postscript to Our Mutual Friend, Dickens described himself as “a story weaver at his loom,” overseeing the relation of “the finer threads to the whole pattern.” Two hundred years after his birth, let us remember him this way: a craftsman whose ethical goal was to salvage Dickensian London, to transform the waste, the dirt, the misery, into beauty, to create the Dickensian home out of the very materials that seem most to threaten it.

Talia Schaffer is the author of Novel Craft: Victorian Domestic Handicraft and Nineteenth-Century Fiction and Professor of English at Queens College and the Graduate Center of the City of New York. She is the author of The Forgotten Female Aesthetes, co-editor with Kathy Psomiades of Women and British Aestheticism, and the editor of Literature and Culture at the Fin de Siecle.