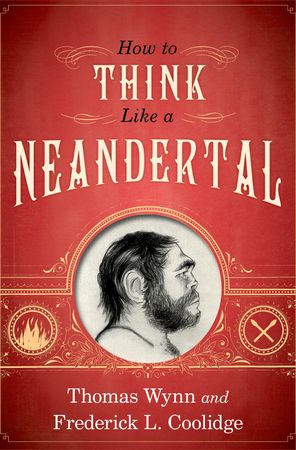 
Neandertal communication must have been different from modern language. To repeat a point made often in this book, Neandertals were not a stage of evolution that preceded modern humans. They were a distinct population that had a separate evolutionary history for several hundred thousand years, during which time they evolved a number of derived characteristics not shared with Homo sapiens sapiens. At the same time, a continent away, our ancestors were evolving as well. Undoubtedly both Neandertals and Homo sapiens sapiens continued to share many characteristics that each retained from their common ancestor, including characteristics of communication. To put it another way, the only features that we can confidently assign to both Neandertals and Homo sapiens sapiens are features inherited from Homo heidelbergensis. If Homo heidelbergensis communicated via modern style words and modern syntax, then we can safely attribute these to Neandertals as well. Most scholars find this highly unlikely, largely because Homo heidelbergensis brains were slightly smaller than ours and smaller than Neandertals’, but also because the archaeological record of Homo heidelbergensis is much less ‘modern’ than either ours or Neandertals’. Thus, we must conclude that Neandertal communication had evolved along its own path, and that this path may have been quite different from the one followed by our ancestors. The result must have been a difference far greater than the difference between Chinese and English, or indeed between any pair of human languages. Specifying just how Neandertal communication differed from ours may be impossible, at least at our current level of understanding. But we can attempt to set out general features of Neandertal communication based on what we know from the comparative, fossil, and archaeological records.

As we have tried to show in previous chapters, the paleoanthropological record of Neandertals suggests that they relied heavily on two styles of thinking – expert cognition and embodied social cognition. These, at least, are the cognitive styles that best encompass what we know of Neandertal daily life. And they do carry implications for communication. Neandertals were expert stone knappers, relied on detailed knowledge of landscape, and a large body of hunting tactics. It is possible that all of this knowledge existed as alinguistic motor procedures learned through observation, failure, and repetition. We just think it unlikely. If an experienced knapper could focus the attention of a novice using words it would be easier to learn Levallois. Even more useful would be labels for features of the landscape, and perhaps even routes, enabling Neandertal hunters to refer to any location in their territories. Such labels would almost have been required if widely dispersed foraging groups needed to congregate at certain places (e.g., La Cotte). And most critical of all, in a natural selection sense, would be an ability to indicate a hunting tactic prior to execution. These labels must have been words of some kind. We suspect that Neandertal words were always embedded in a rich social and environmental context that included gesturing (e.g., pointing) and emotionally laden tones of voice, much as most human vocal communication is similarly embedded, a feature of communication probably inherited from Homo heidelbergensis.

At the risk of crawling even further out on a limb than the two of us usually go, we make the following suggestions about Neandertal communication:

1)  Neandertals had speech. Their expanded Broca’s area in the brain, and their possession of a human FOXP2 gene both suggest this. Neandertal speech was probably based on a large (perhaps huge) vocabulary – words for places, routes, techniques, individuals, and emotions. We have shown that Neandertal expertise was largely based on long-term memory. Much of this store of information was in the form of procedures, but we suspect an equally large part of this ‘how to’ information existed as verbal knowledge in the form of terms.

2)  Many of these words also existed in stock sayings, also held in long-term memory, much like the idioms and adages in modern language (the “if it ain’t broke, don’t fix it” variety).

3)  Speech depended heavily on environmental and social information to disambiguate word clusters. Clues from context can be very effective. U.S. readers may remember a television commercial in which four young men riding in a car each used only a single word, “dude”, and yet managed to have an intelligible conversation (for themselves and the listener).

4)  Neandertal speech regularly used questions, commands, exclamations, and perhaps directional reference (indicatives). The differences may have been marked via ‘aspect’ words, or morphological rules, or even grammatical rules. But the difference might also have been delivered through context or change in tone of voice, or even gesture.

5)  Neandertal speech was capable of describing new situations, as when they juxtaposed terms for animals and places that they had not combined before. So at least in this sense, their speech must have been able to express new thoughts, the linguists’ productivity. But given its likely heavy reliance on long-term memory, their productivity was probably limited to reshuffling a very large body of lexical elements and phrases.

This communication system would have been capable of delivering a very large amount of information in context, but would have been less capable than modern language of long range reference in the absence of appropriate cues. Neandertal language was direct and task relevant. It was capable of referring to events in the past, or future, or at distant places, but only in ways connected to a context shared with the listener. There is no reason to think that Neandertals created elaborate stories or myths. Recall that Neandertals appear not to have used fire in the same social way that modern humans do. Moreover, they had few interactions with neighboring territorial communities, and therefore no reason to have modes of speech that could be used to interact with strangers, or even acquaintances.

The picture of Neandertal speech we have just presented is a minimal one based on what we know about Neandertal life from the paleoanthropological record. Neandertal speech may have been more powerful and subtle than this picture suggests. It may have included features quite foreign to modern language that evolved in the Neandertal lineage since the time of Homo heidelbergensis. There just is no evidence that requires anything beyond the features we have presented.

Why do homo sapiens include so much variety?