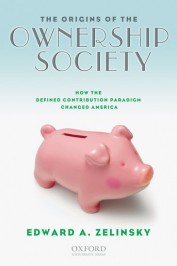 The Origins of the Ownership Society

As the year draws to a close, we’ve been reflecting on all the wonderful books published in 2011, and in doing so, we’ve also realized there are some classics worth revisiting. The authors and friends of Oxford University Press are proud to present this series of essays, which will appear regularly until the New Year, drawing our attention to books both new and old. Here, regular OUPblog columnist Edward Zelinsky writes about My Antonia by Willa Cather.

The first time I read My Antonia, I hated it. That was to be expected: It was required reading in my sophomore English course at Omaha Central High. This was during the Sixties. In the Age of Aquarius, no one was supposed to like assigned reading. That’s why it had to be assigned.

I next confronted My Antonia in college. Like Jim Burden, Willa Cather’s narrator, I had left Nebraska to go to east to continue my education. During those years, some feminists were arguing for Cather’s place in the women’s canon. Thus, Antonia, the Nebraska icon, was to be transformed into Antonia, the feminist icon.

This didn’t seem quite right to me. As I reread My Antonia in college half a continent away from Nebraska, Cather’s portrayal of Nebraska seemed more appealing than it had when I had grown up there. And Antonia was too rich a character to serve anyone’s political agenda.

It was when my eleven year old daughter discovered My Antonia that I came full circle. Jacoba was blessed with a wonderful English teacher who guided her to read challenging novels. My Antonia became Jacoba’s favorite book. This prompted me to confront Cather’s most famous Nebraska novel once again.

This time, I was really hooked as I read of Antonia, her family’s travails and her ultimate triumph on the plains of Nebraska. This book, I declared, was good; it deserved to be taken off the required reading list.

The following year, when we visited my mother in Omaha, Jacoba asked if we could go to Red Cloud, Willa Cather’s hometown which she fictionalized in My Antonia as Black Hawk. I told my mother we were going to Red Cloud because Jacoba wanted to. That was partially true.

Our day in Red Cloud remains one of the best memories of raising my daughter. The citizens of Red Cloud are understandably proud as they guide visitors through the many Cather-related structures still standing.

At the end of the day, our guide gently walked us toward the cemetery where Antonia is buried. The small, picturesque graveyard was dotted with Nebraska sunflowers. Standing at Antonia’s grave was one of the genuinely peaceful moments of my life.

As I stood by Antonia’s grave, I realized that, like Jim Burden, I had gone east to be educated and live my life as a lawyer, but that I had forever left behind an important part of me in Nebraska.

Edward A. Zelinsky is the Morris and Annie Trachman Professor of Law at the Benjamin N. Cardozo School of Law of Yeshiva University. He is the author of The Origins of the Ownership Society: How The Defined Contribution Paradigm Changed America. Take a look at his monthly column.