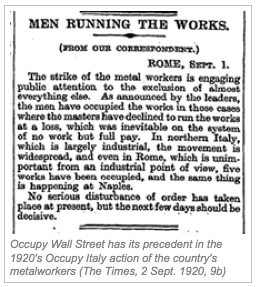 “Occupy Wall Street,” the protest that put “occupy” on track to become one of the 2011 words of the year, could be derailed by a Long Island couple seeking to trademark the movement’s name.

The rapidly-spreading Occupy Wall Street protests target the huge gap between rich and poor in America and elsewhere, so on Oct. 18, Robert and Diane Maresca tried to erase their own personal income gap by filing trademark application 85449710 with the U.S. Patent and Trademark Office so they could start selling Occupy Wall St.™ T-shirts, bumper stickers, and totebags, as well as various other tchotchkes bearing the protest name (the Marescas’ application is for “Occupy Wall St.,” using the abbreviated form of street–they haven’t expressed an interest in owning “Occupy Wall Street” as well).

The Trademark Commission will have to decide whether anyone can own the rights to the phrase “Occupy Wall Street,” which seems to have captured the public’s imagination and entered the public domain in record time–in fact, faster than you can say “Tea Party.” If so, the Commission must then consider whether the Marescas have any right to the phrase. They didn’t join the OWS protests and they may have never even been to Wall St. (according to their application, the Marescas live in West Islip, about 50 miles from the main protest site). Plus, so far as anyone can tell, they’ve never manufactured T-shirts, bags, or stickers with “Occupy Wall St.” or any other logo or design.

The Marescas are not the only ones trying to capitalize on the anticapitalist protests. There’s an episode of an MTV reality show, complete with commercial sponsors. There’s a book. There’s an Android app. And a company called Condomania is selling Occupy condoms (free samples available to the protestors). There are over 3,000 items of Occupy merchandise for sale on the ’net. A local pizza shop sells Occupy Meat, Occupy Veggie, and Occupy Vegan pizzas to the protestors at a discounted price of $15 a pie. There’s even an Occupy Wall Street iPhone™ app that looks like a combo of Tetris and Angry Birds ($4.99 at the iTunes™ App Store™). 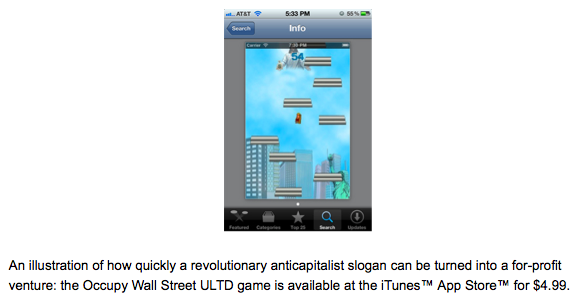 The Occupy movement itself is trying to buy TV time to air a commercial that it made—though unlike the competition, the original OWS remains not-for-profit. But it’s not even clear that Occupy Wall Street could trademark its own name, or that, despite its new-found popularity, the word occupy could qualify as Word of the Year, since it’s not really a new word, and its use in the phrase “Occupy Wall Street” doesn’t represent a new meaning of an old word. Occupy has meant ‘take possession of something, especially by force,’ since the 14th century. The Oxford English Dictionary citations for occupy include John Wycliffe’s 1382 translation of the Bible, “Comeþ down in to aȝen-metyng of Madyan & occupieþ þe wateris vn to Bethhara & Jordan” (Judges vii. 24, emphasis added), and, from Sir Walter Raleigh’s History of the World (1614), “They occupied the Citie, Lands, Goods, and Wiues, of those, whom they had murdered.”

Even the newer sense, ‘to occupy as a protest rather than an outright property seizure,’ is almost a century old: the OED cites a 1920 story in the Times about an Italian worker protest, “The men have occupied the works in those cases where the masters have declined to run the works at a loss,” along with a 1968 Newsweek account of a building take-over at Columbia University: “The university’s Hamilton Hall was the first successful target of the revolutionaries, and it was seized and occupied Tuesday.” For a time, occupy even meant ‘to have sexual intercourse,’ as in this Dutch-English dictionary from 1648: “Genooten, to Lie with, or to Occupie a woman.” That sense seems to have died out by the mid-17th century, though the manufacturer of the Occupy condom would probably like to revive it.

In the end, even if occupy continues to make news and achieves Word of the Year status, trying to own the rights to a disorganized, grass-roots movement like Occupy Wall Street may prove as futile as Facebook® trying to own the rights to the word face, Apple® trying to put a lock on pod, or, in the 1960s, CompuServe® trying to trademark Email. There are already lots of vendors selling “Occupy Wall Street” T-shirts. Instead of coming late to the party, the Marescas might have more luck trying to corner the market on Greek Debt Crisis™ tees. 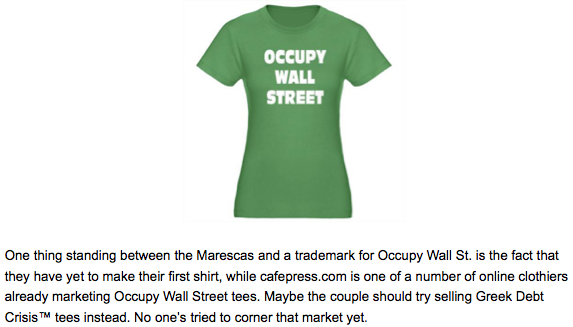 Protest songs and the spirit of America [playlist]