English is a world language. Once an insignificant set of immigrant dialects on an obscure island in the rainswept North Sea, English is now the de facto language of multinational business, of science and technology, and of rock ‘n’ roll. Non-English speakers around the globe seem to be learning English as fast as they can. Plus there are more than three times as many English articles in Wikipedia as there are German, the second-biggest language of the online encyclopedia. When it comes to the global domination of English, resistance may be futile.

There have been world languages before, and though none of them, not Latin, French, or Proto-Indo-European, enjoyed the market share claimed by English today, all of them lost world-language status when the world’s political and economic situation changed. Right now, though, the position of English remains strong.

There are anywhere from 350 to 500 million native English speakers, and up to 1 billion more who use it as a second or additional language to some extent. That’s 20% of the world’s 6.9 billion people. There are close to 7,000 languages spoken around the world today, but according to Ethnologue, 39% of the Earth’s people speak one of eight brand-name languages: Chinese, Spanish, English, Arabic, Hindi, Bengali, Portuguese, and Russian (Japanese is number 9). Of these, only English can claim global dominance.

In contrast, Ethnologue finds that “94% of languages are spoken by only 6% of the world’s people.” The Big Eight are pushing out mid-sized languages like Bulgarian (almost 8 million speakers), Finnish (4.7 million), and Basque (only 600,000, but fairly energetic). And smaller languages may have an even bigger problem. About half the Earth’s languages have fewer than 3,000 speakers, and as many as 500 “endangered” languages don’t have enough speakers to ensure their transmission to the next generation. Ethnologue reports 250 speakers of Emplawas in Indonesia; 30 speakers of Pam in Cameroon; and only 1 speaker of Wichita in the United States (these numbers are outdated, and these languages may have even fewer speakers now). At this rate, it won’t be long before everyone on the planet has to choose from a limited menu of English, Mandarin, Hindi, or silence. And the Hindi and Mandarin speakers will have to learn English as well so they can communicate with one another, as well as with English speakers, who seem reluctant to learn anyone else’s language, at least so long as English retains the world-language crown.

But, while linguistic diversity may continue its decline, there’s resistance to globalization in language as well as there is in business: the McDonaldization of the planet’s goods and services is being offset by a renewed emphasis on local craft and home-grown industry, where products marketed as “limited edition” are actually made in limited numbers, and boutique beers compete successfully against giants like Miller and Bud.

In the language marketplace, while English and Mandarin continue to surge, boutique languages are attracting a growing number of adherents as well, whether it’s a niche language like Esperanto, created to bring about world peace, or an artisanal lingo like Klingon, whose speakers strike a more warlike pose. Esperanto has about 1,000 native speakers and as many as two million who boast some familiarity with the language. No one has managed to get close enough to the Klingons to count them, though in 2006 the Guinness Book of World Records announced that for the first time Klingon had surpassed Esperanto in market share. 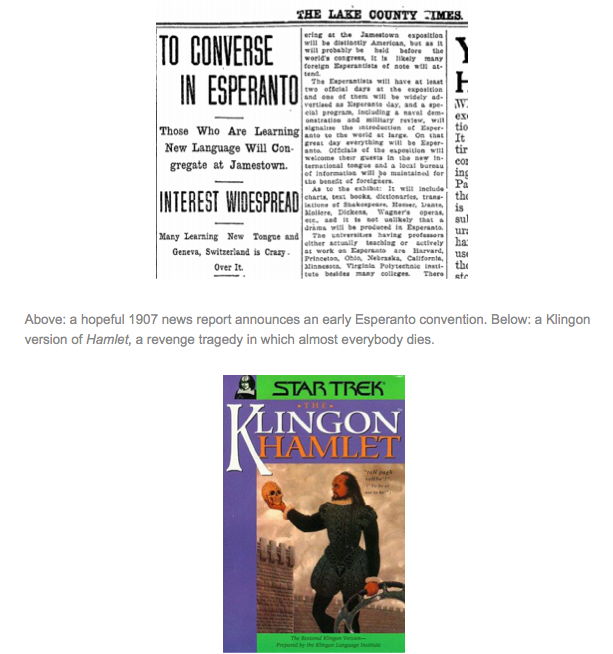 The Earth’s linguistic landscape is constantly changing, and English may ultimately find itself going the way of Latin.

The conventional wisdom has it that Latin lost its monopoly on world-wide communication and devolved into a set of local languages after the fall of Rome. But Rome didn’t fall in a day, and provincial blends resulting from the contact between Latin and local lingos may have already been developing long before Rome lost its economic and political hold on Europe. Today we hear complaints about Spanglish, Konglish, and Franglais, blends of Spanish, Korean, and French with English. For all we know, long before the fall of Rome, speakers both of Latin and of the Celtic and Germanic languages it competed with voiced concerns about the deleterious influences of Bretinus (a fusion of Celtic Breton and Latin), Germanium (Gothic and Latin), even Italiatina (an Italic-flavored Latin patois, though it sounds more like a kind of pasta).

In any case, after Rome fell, Latin persisted as a scholarly language alongside the developing vernaculars, and it may be that as the world’s political and economic focus continues to shift, today’s English varieties—American, British, Nigerian, Australian, Irish, Indian, the English of Hong Kong or Singapore, and so on—will evolve into separate, local spin-offs on the model of the Romance languages, all related, to be sure, but different enough, each from the next, to constitute separate tongues.

It may be, too, that globish, a stripped-down form of international English analogous to the international forms of Latin that survived the Fall, will continue to exist alongside these developing varieties of English. And it is likely too that, as English continues to evolve, it may wind up being replaced by languages like Breton (500,000 regular users); Latin (no native speakers, but an unreliable internet source says about 3,000 people know enough Latin to carry on a conversation, plus there are 75,000 entries on Vicipædia Latina); or Hawaiian (the 2000 U.S. Census lists 27,000 speakers, but there may be as few as 1,000 native Hawaiian speakers). Perhaps it will be a Big-8 language like Mandarin or Hindi. Or perhaps the next world language, like English before it, will have its origins on a small, windswept island (Hawaiian seems like a good candidate), or a climatologically-challenged northern terrain (anyone care to vote for Finnish?). So far as artificial languages go, there really is no hope here for Esperanto or even Klingon. But with the way computers are taking over all the workings of the planet, the next world language could well come from the nanocircuits of a computer chip, C++, Java script, or some other form of computer code, against which resistance will be futile.