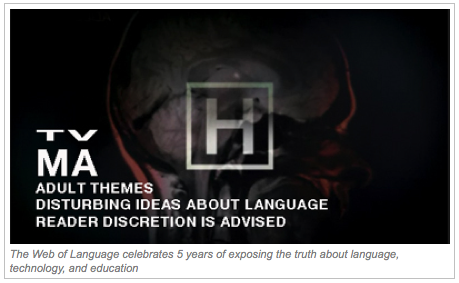 The Web of Language is five years old today.

The first post—“Farsi Farce: Iran to deport all foreign words”—appeared on August 17, 2006, which in digital years makes it practically Neolithic. To protest American meddling in the Middle East, Iranian president Mahmoud Ahmadinejad banned all foreign words from Farsi: pizza would become “elastic bread,” and internet chats, “short talks,” because chatters wouldn’t have much time to talk before they were hauled off to prison.

In the end, Ahmadinejad’s linguistic purge went largely unnoticed in the West. Instead of deporting all those English words, the Iranian president might have done better to take them hostage and trade them for enriched uranium.

There have been 275 Web of Language posts since its debut. Some of them get reposted on other sites, and a few have even appeared in print, for those who still read hard copy. For the blog’s fifth-anniversary, here’s a retrospective of some of the most popular posts, plus some of my own favorites.

WOL’s first big hit was the unlikely Commas gone wild, a medley of various comma stories: Pres. Bush’s statement that the Iraq war was a historical comma; a Canadian lawsuit in which millions of dollars seemed to hinge on a comma; and a misguided book about a panda who walked into a bar. I didn’t know it, but punctuation is always hot.

“Speak English—get out of jail free” recounts some English-only stories. A Pennsylvania judge sentencing two defendants to learn English or go to jail, and a Texas judge ordering a woman to speak English instead of Spanish or lose custody of her daughter. But telling people what language to use goes way back. In 1918, the governor of Iowa banned the public use of foreign languages, and several Iowa farm women were arrested for speaking German on their party-line telephone. There has to be a better way to deal with the boundless linguistic creativity of Americans than these wrong-headed judicial rulings and gubernatorial proclamations. 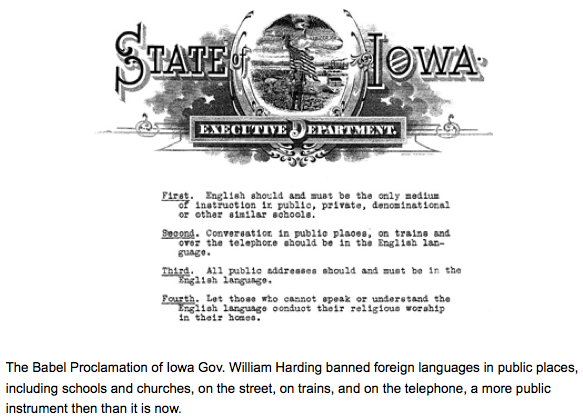 “Driving while Spanish nets trucker $500 fine,” critiques linguistic profiling: state police routinely stop motorists for driving under the influence of Spanish, a violation of federal trucking regulations. But in “Fined for driving while Spanish in Dallas,” we learn that Dallas police were ticketing motorists for not speaking English when that “offence” was not actually against any law.

“Defending the language with bullets” discusses the implications of the bumper sticker, “If you can read this, thank a teacher. If you can read this in English, thank a soldier,” which seems to take the defense of language out of the classroom and onto the battlefield. The linguist Max Weinreich is credited with quipping that a language is a dialect with an army and a navy. But guns can’t keep a language safe at home or seal a border to keep other languages out.

“Researchers find swearing has health benefits” is one of many WOL posts discussing scientific breakthroughs in language. In this case, the recent finding that swearing promotes health proves to be bad news for those who think that dirty words are not protected by the first amendment and violate the third commandment, but it’s good news for the pharmaceutical companies, who are already trying to bottle it.

“A Spelling Reformer writes to Mr. Lincoln” details the efforts of an abolitionist minister to explain to Abraham Lincoln both the evils of slavery and the advantages of phonetic spelling. The nineteenth century saw a number of proposals to replace the apparent chaos of English spelling with a rational system. A. B. Pikard told Mr. Lincoln, “I trust u wil hav no difikulti in redin dis;—u se it is ritn in de Fonetik Alfabet, and if u deturmin a letr in eni plas u deturmin it in evri plas.” Whether or not Lincoln had “no difikulti in redin dis” (no difficulty in reading this), he left the alphabet as he found it, though he did abolish slavery.

Perhaps the most popular Web of Language post is one that I wrote years before WOL went online: “The Noun Game: a simple grammar lesson leads to a clash of civilizations.” It’s the story of a young Indian boy whose world view clashes with his teacher’s views of good grammar. In the noun game, students take cards with nouns on them and place them in buckets labeled “person,” “place,” or “thing.” When Ganesh placed “horse” in the “person” bucket, his teacher marked him wrong. But Ganesh, who grew up in India before moving to Ohio, knew that living creatures weren’t things, that they had more in common with people than they did with inanimates. Is the point of the noun game to see whether students recognize possible nouns as nouns, or whether their view of the universe agrees with the teacher’s? Is education fitting things into buckets, or wondering why the categories don’t fit the facts? Does education consist of grading you on how well you can play a game? Alas, most people who click on the post are probably not looking for a critique of how the schools teach grammar, but a game to help their children learn that nouns name persons, places, and things.

In “Montreal bus driver celebrates 40 years of official bilingualism by throwing English-speaking passenger off her bus” we learn that after a passenger asked her for the time in English, a Montreal bus driver told the passenger, in English, “I don’t speak English.” Then she called the police and ordered all the passengers off her bus. Her supervisors defended the action because, while English and French have been Canada’s two official languages for exactly forty years, French is the sole official language of the province of Québec. The passenger complained, but the outcome of the official inquiry to the incident was never made public.

“Language lessons: It’s time for English teachers to stop teaching that the earth is flat” asks why, when high school science includes units on the atom, evolution, black holes, and the big bang, English teachers ignore the latest linguistic knowledge and teach flat-earth grammar lessons that would be recognizable to 18th-century grammarians, not to mention their ancient Greek and Roman counterparts. 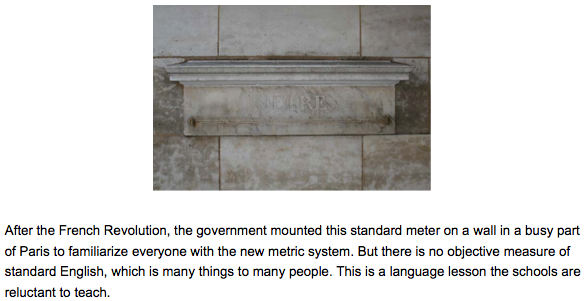 “Don’t make English official, ban it instead” argues that supporters of official English have got it all wrong. Instead to requiring English, banning it will do for English what Prohibition did for liquor. Those who already use it will continue to do so, and those who don’t will want to try out what has been forbidden. This negative psychology works with children. It works with speed limits. It even worked in the Garden of Eden.

And “Should everybody write? Or is there enough junk on the internet already?” confronts critics who want to limit the exploding author’s club made possible by the internet. In the old days, writers had to prove their chops before they could publish. Now all you need to be a writer is a laptop, a Wi-Fi card, and a place to sit at Starbucks. There may be too much to read now, but even in the days of the great library at Alexandria there was too much to read. The best way to deal with too many writers and their textual overload isn’t to license authors and limit their production. Just close the book, hit the off button, or avert your eyes.

Finally, there’s “The Gender-Neutral Pronoun: after 150 years, still an epic fail.” Wordsmiths have been coining gender-neutral pronouns for a century and a half, to supply a missing word, prevent grammatical error, and restore gender balance to the English pronoun system, all to no avail. Coiners of these new words insist that they are indispensable, but users of English stalwartly reject, ridicule, or just ignore these proposals for what truly is “the word that failed.”

That’s only a small part of what the Web of Language has been up to during the past five years.