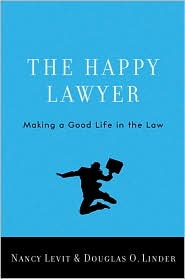 The Happy Lawyer: Making a Good Life in the Law

So you’re going to law school this fall. Congratulations! Getting in wasn’t easy. Last year 155,000 people took the LSAT. The 201 ABA accredited law schools across the country received about 88,000 applications. Only 49,700 students matriculated.

Obviously you’re a hard worker (or you wouldn’t be coming to law school and you wouldn’t have read past the first paragraph), so you may be wondering what you can do the summer before to prepare yourself for law school.

First, let’s get the legal disclaimers out of the way.  There are no guarantees, warranties, or promises of any kind; there is no magic bullet for preparation. There are, however, a few tips toward a happier and more productive beginning that we will offer you.

More than one-third of you will be going to law school in some place other than your home or college town. It is important to have housing set up so you can move in at least several weeks in advance.  Find the stores you’ll need, arrange your banking, stock up on supplies and grocery staples. Students struggle when they land suddenly in a new town and promptly start law school. Law school requires more focus than other forms of education. It starts immediately, and is difficult at first because students may be called on to speak in class or have writing assignments due.  If you get behind in the first few foundational weeks, it will take a lot of work to catch up later.  In undergraduate lectures, you were free to fall asleep perusing Facebook.  Not anymore.

A colleague of ours, Dean Barbara Glesner Fines, has posted her wonderful Orientation speech online, emphasizing that there are better and worse times to begin law school, and the worst time to start law school is at the same time that you start (or end) a marriage, or have a new baby, or are newly diagnosed with a chronic illness. In other words, any time you’re facing significant personal challenges. Arrange for your law school computer or any upgrade at the beginning of the summer, so you have plenty of time to become familiar with it. In short, get the distractions out of the way.

Related to the issue of getting situated is the idea of establishing residency for both bar and tuition purposes, depending on your state’s and your school’s rules. Top-Law-Schools.com has posted a guide to “Law School Residency Issues by State,” covering 23 states.

Two of the major law school stressors are a fear of failure and fear of the unknown. We’ll tackle fear of failure first, since it’s the one most often voiced by students. Nationwide, very few students are dismissed for academic deficiency. Professor Michael Olivas, who specializes in higher education law, says “In most law schools, only a small number of students fail because of poor academic performance.” It is not like the Kingsfieldian sort of imprecation, “Look to your left, look to your right, one of you won’t be here next year.” (In fact, at our law school, we say, “Look to your left, look to your right . . . you are looking at people who will be friends and professional colleagues for the next thirty years if you treat them right.”)

When students “fear failure,” often what they actually fear is not succeeding in ways to which they are accustomed. Many students define failure as not receiving grades in the top 10 percent. That means they fear something that will affect 90 percent of the class. Our suggestions are to address this conundrum head on by preparing to approach law school with a specific set of attitudes.

Come to law school to learn about the law and your “fit” with a career in the law. To be successful in law school, you must adopt a positive attitude about competition. There are many paths in the law, so you don’t have to view your fellow law students as racing down the same track as you, with only one of you being able to take home the prize. So focus on your own goals, values, and learning, not on getting better grades than everybody else.  An interesting set of studies about learning in law school shows that students who concentrate on learning objectives (“Can I explain the concept of res ipsa loquitur to my tenth grade nephew?”) actually performed better on exams than students who fretted over grades (“I wonder if I’m studying hard enough to get a B?”).

We aren’t telling you that grades are unimportant. They are important in many ways — for clerking and law review opportunities, as well as job prospects. We are suggesting that you not let either your happiness or your attitude toward law school be defined by your grades. Don’t step onto the institutional glide path, where you unquestioningly decide that you have to have top grades so that you can work at a large law firm. Think instead about your values, your strengths, your interests, and how you can build on these in law school.

Prepare to support and nurture the people around you. People who socialize “a reasonable amount” are happier and better grounded as law students. Avoid competitive impulses and negative people. Will you have a Debbie Downer in your law school class? Sure you will.  These people gleefully find the negative in any situation . . . and they infect you.   Disgruntled law students (and law professors) can spread their unhappiness like cold germs. But you’ll also have many bubbly and upbeat fellow travelers too. Hang out with them. Studies in organizational behavior show that their positive moods will transfer between people and spread throughout a group.

Learn to make downward comparisons. An important study in the happiness literature has to do with Olympic athletes. It showed that the bronze medalists are almost uniformly happier than the silver medalists. Silver medalists looked upward (“Just a fraction of a second better and I would have had the gold.”), while bronze medalists look downward at all the other athletes who didn’t even make it onto the medal stand. It’s an attitude you can adopt in numerous ways. Do just a little pro bono work, law-related or not—for instance, do volunteer income tax preparation, stock the shelves at a food pantry, pitch-in on a weekend project to rehab a low-income house.  Or in your fifth week of law school look back at your first-week-of-law-school self and see how far you have come.

Uncertainty about what law school will be like also scares people. On one hand, nothing can really prepare you except just doing it. On the other hand, you can read up about law school.  Scott Turow’s One L is a classic. It’s a well-written snapshot of what law school was like at Harvard back in the 1970s. Everyone’s experiences are different, so you’re likely to find law school much different in many ways, but some things remain relatively unchanged, and it’s a very interesting read. A former colleague of ours, Corinne Cooper, wrote an article, Letter to a Young Law Student, as essentially “an anthropologist, reciting my findings on a tribe I’ve observed for many years, of which I was once a member, but whom I no longer fully live among.”

One of the best books about law school is Professor Andrew McClurg’s 1L of a Ride: A Well-Traveled Professor’s Roadmap to Success in the First Year of Law School. This fun-to-read book is by an award-winning professor who writes about the best habits to develop, and offers strategies for note-taking, studying and test-taking. Our book, The Happy Lawyer: Making a Good Life in the Law, discusses what to expect emotionally in your first year of law school, how to avoid debt-driven career choices or getting sucked into believing that only top grades matter, and how to chart a path toward a fulfilling legal career.

Some folks prescribe a specific set of reading materials (the U.S. Constitution, Eats, Shoots & Leaves by Lynne Truss for grammatical touch-ups, or Karl Llewellyn’s The Bramble Bush, or just reading some legal appellate decisions to understand the terminology and cadence), and various law schools offer summer reading lists: Boston College, the University of Connecticut, New York University, and Syracuse University. We generally think reading — lots of reading — is a good thing. When we say reading, we mean reading, not studying.  There are always some students who think they should start getting a jump start on actually learning law, so they’re reading hornbooks or outlines.  We think you would be better off just reading a high volume of material in a more casual, recreational way.  You still might learn something, of course, but it’s more in a general background sort of way rather than specifically trying to pre-study for your courses.

You may hear that you need to have a legal job the summer before law school.  We disagree.  If you already have the opportunity to work in a law firm or government agency, that is great. Go for it. But a pre-law school summer legal job isn’t necessary.  Professor Alan Childress offers the advice to work hard (in a non-law job) and perhaps to travel, so that you will be ready to settle down to law school. Students posting on the “Wish I Would Have Known” blog echo his advice: “take a pottery class or travel someplace awesome or read some great non-fiction. It’ll give you at least as much to talk about in an interview than working as a glorified file clerk somewhere.”

You can also learn more about the law school that you’ll be attending. You may think you read enough about your law school during the application process. Drill deeper now. Take some hours to play around on your law school’s web site. If you explore, you’ll see things you haven’t noticed before—an interesting fall lecture on class actions, an Association of Women Law Students pancake breakfast planned, or a professor’s bio that shows he shares your passion for kayaking.

You can find people who share your interests. Many law schools have student emissaries and almost all have a coordinator of student services. Especially if you’re attending law school in a new state, consider calling or emailing your school and ask to be put in contact with representatives from unofficial groups, like a curling club or a running group. Do seek the advice of mentors. You’ll probably find a very supportive community ready to embrace you and offer guidance. It’s like one of the last lines in the book that sparked an interest in law for many of us, To Kill a Mockingbird, when Atticus confirms Scout’s discovery that “[m]ost people are” essentially kind and helpful “when you finally see them.”

Speaking of which, do re-read To Kill a Mockingbird. Reading this classic before law school is analogous to playing “We Will Rock You” before a sporting event.

Nancy Levit and Douglas O. Linder are law professors at the University of Missouri-Kansas City School of Law and authors of The Happy Lawyer: Making a Good Life in the Law.

Versions of this article also appeared on The National Jurist and Concurring Opinions.
View more about this book on the

Studying law in the UK: Are you ready?