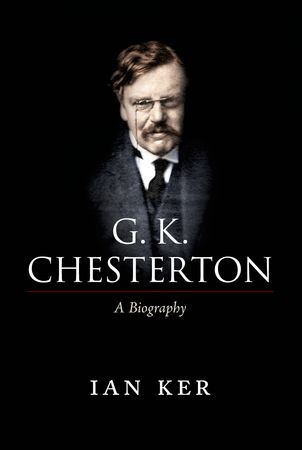 
Oxford University Press recently published my new book, G. K. Chesterton:  A Biography.  The reviews remind me of the reviews I received when OUP published my biography of John Henry Newman more than twenty years ago, although the kind of reviewer who is asked to review a life of Chesterton is quite likely to be a very different kind of reviewer from the reviewer who would review a life of Newman.  However, there are similarities between the responses to the two books and they have caused me to reflect on the kind of biography I try to write.

First and most obviously, I am not a popular biographer:  I am not just interested in the ‘story’ of my subject’s life.  A reviewer who wants that kind of life is going to be annoyed because my biographies are academic critical biographies and therefore are not going to be short. I have described the two biographies I have written as intellectual and literary lives.  They are ‘lives’ because they attempt to bring their subjects to life; they are not simply studies of their writings.  Nevertheless the only reason I have for writing the lives of writers and thinkers like Newman and Chesterton is because I think they are important writers and thinkers and I assume that is, if not the only, certainly the, or a major part of, the reason why anyone would wish to read their biographies.  I therefore do attempt to bring to life both their thought and their writings for the reader. A reader of a biography of Jane Austen, say, can be assumed to have read all the relatively few novels she wrote, but very few readers of a biography of Newman and Chesterton can be assumed to have read anything more than a tiny portion of their voluminous works.

I can give a personal illustration of this ordinary reader.  I am at present reading a hefty, nine hundred and fifty page biography of John Ruskin.  Now Ruskin’s personal life is certainly interesting if only because of his disastrous marriage to Effie Gray and his unhappy love for Rose La Touche.  But the reason I wanted to read what purports to be an academic rather than popular life was because I wanted to know more about Ruskin’s voluminous writings, of which I have only read a very small fraction.  But while this is a hugely detailed personal biography, the author frustratingly does not introduce me into Ruskin’s writings in the way I was hoping he would.  He may make Ruskin as a man come alive, but he does not attempt to make him come alive as a writer.

I would want to emphasise the word ‘alive’.  A biography which is not simply interested in the ‘story’ of the subject’s life is not therefore entitled to be boring.  An intellectual and literary biographer must be discriminating and selective.  I am, in particular, very suspicious of what I call the lazy block quotation which enables the biographer to switch off at the expense of the reader.  That certainly doesn’t mean I am against quoting.  On the contrary, the subject of the biographer can only come alive if their voice is heard, whether their conversational voice (which usually means quoting from letters) or their voice as a writer.  But quotation should be highly selective and discriminating and the long indented quotation needs prior justification.  The reader needs persuasion against the temptation to skip!

Some reviewers are going to dismiss the kind of biography I write as what they call hagiography.  It is dismissed as old-fashioned biography because it seeks to praise rather than detract.  Such reviewers are, of course, inconsistent:  they expect a biographer of Hitler to write the opposite of hagiography and would be scandalized if the biographer sought in any way to justify his persecution of the Jews.  Now I certainly don’t try and hide any damaging evidence nor am I totally uncritical:  thus, in the case of Chesterton, I am very clear that he is not a major novelist or poet; I am also quite candid about the ways in which he was selfish as a result of being spoiled as a child, and I do accept that there is some justification for the charge of anti-Semitism.  But – and this is another respect in which I differ from many contemporary biographers – I am not interested in what I would call idle speculation (generally of a sexual nature) in order to present a critical ‘revisionist’ portrait.  The Victorians liked to have heroes, we like to pull people down from their pedestals – and the biographer who fails to do that will certainly be branded as a hagiographer.  But I can’t conceive of writing a biography of someone I don’t admire as a person and as a writer and thinker.

Ian Ker has taught both English literature and theology in universities in the United States and Britain, where he currently teaches in the Oxford University theology faculty.  He is the author and editor of more than twenty books on Newman, including John Henry Newman:  A Biography, as well as the author of The Catholic Revival in English Literature, 1845-1961. His latest book is G. K. Chesterton: A Biography.