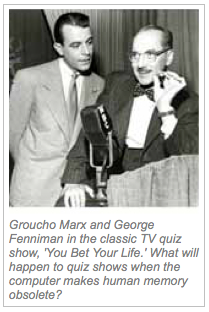 Imagine this scenario: You’re on “Who Wants to Be a Millionaire?” and you decide to “phone a friend” for help with that million-dollar question. Only you can’t remember the number. You look helplessly into the camera, shrug, and say, “I call him every day, but he’s on my contacts so I just click the link, and I guess I never bothered to memorize his number, haha.” “That’s some expensive haha,” says the host, waving his cigar, followed by, “O.K., George, who’s our next contestant?”

Now a research report in the journal Science suggests that smartphones, along with computers, tablets, and the internet, are weakening our memories. This has implications not just for the future of quiz shows–most of us can’t compete against computers on Jeopardy–but also for the way we deal with information: instead of remembering something, we remember how to look it up. Good luck with that when the internet is down.

Psychologists call this the “Google effect”: we don’t bother to memorize what we can find online with a couple of clicks. The article, which is only available online, puts this in more academic language:

Since search engines are continually available to us, we may often be in a state of not feeling we need to encode the information internally. When we need it, we will look it up. . . . When people expect to have future access to information, they have lower rates of recall of the information itself and enhanced recall instead for where to access it. [Betsy Sparrow, Jennie Liu, and David Wegner, “Google Effects on Memory: Cognitive Consequences of Having Information at Our Fingertips.” Science, July 14, 2011]

More and more we’re saying to ourselves, “Why bother memorizing the names of the Oscar-nominated movies for 1939 when I can just look them up on IMDb?” Or, as the psychologists put it, “The Internet has become a primary form of external or transactive memory, where information is stored collectively outside ourselves.”

But this is not surprising. Relying on an external database is nothing new: before digitized contacts files there were address books; before IMDb there were Leonard Maltin books. Before Wikipedia there were analog encyclopedias. And before Google there were librarians. As the experimenters acknowledge, humans have always recognized the role of individual expertise: we quickly learn who to ask for the best recipe, the most-accurate directions, the conversion from Fahrenheit to centigrade. That way we don’t have to remember everything.

Only now, it seems, we never have to remember anything. Because we can look it up. We don’t even have to remember how to spell, because Google asks, “did you mean blahblahblah?” when it doesn’t recognize our keystrokes.

The Greek philosopher Plato conducted similar experiments in ancient Athens. Back then it wasn’t computers weakening human memory, it was another new technology called writing.

In his famous experiment with the inclined plane, which preceded Galileo’s better-known experiment by a thousand years, Plato proved that the more we write down, the less we remember. Plato says, in the Phaedrus (also available online),

This invention [writing] will produce forgetfulness in the minds of those who learn to use it, because they will not practice their memory. Their trust in writing, produced by external characters which are no part of themselves, will discourage the use of their own memory within them.

To prove this, Plato got student volunteers in his Intro to Philosophy course (though the word psychology comes from the Greek, it hadn’t been invented yet), divided them into two groups, and asked each to write down the answers to a series of factual questions (How many Greeks can fit inside a Trojan horse?) and mathematical problems (What is the Pythagorean theorem?). They were then given a short writing prompt:

I am a Greek. All Greeks are liars. Explain.

Students were told they’d be retested on their answers a week later. One group of students was told that their answer papyri would be burned as offerings to the gods, while the other group was told that theirs would be stored in stone jars that they could access any time before the retest. (The few students who asked to see their stored papyri so they could refresh their memories were told they had accidentally been burned as offerings to the gods).

After a week had passed, Plato gathered his students in the agora and repeated the test. In their experiments with computers, Sparrow, et al., found that on a similar retest, “those who believed that the computer erased what they typed had the best recall.” But they were replicating what Plato had already found: that the students who were told that their papyri would be burned remembered much more of what they had written than those who had been told their writings would be archived (P < 0.5).

Plato also found that his students didn’t mind that writing was weakening their memories. “Dude,” they told him, “we can always look it up. Is this going to be on the final?”

That’s why Plato called it his experiment with an inclined plane: writing to him was a slippery slope which would lead, not to knowledge, but to paper repositories—libraries, he called them—where knowledge would be stored offline, not in our heads, where it belonged. Plato thought that the impact of writing on memory would be negative. We remember this because one of his students wrote it down.

And now three psychologists from Columbia, Harvard, and the University of Wisconsin have shown that, since the internet is always on and information is never more than a click away, we’ll be depending even less on memory than we did before. Books were a good repository for our memories, but they are so last year. In the future, all we’ll have to remember is where the computer is. And the password.