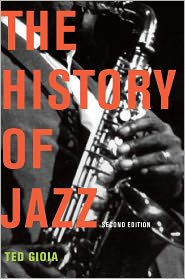 The History of Jazz

Ted Gioia’s The History of Jazz has consistently ranked among the bestselling books on jazz since its publication in 1997.  Gioia has now updated and expanded on this work in a second edition and below he answers questions about the new version of his book and the state of jazz today.

What are the biggest changes happening in jazz world?

When I was teenager and first learning how to play jazz, most musicians of my generation believed that technology would radically change the future of the music.  They turned out to be correct—but not in the ways they had anticipated.

They had been thinking about innovative electric keyboards, synthesizers, wild new guitars and other expensive toys that would change the sound of jazz.  In fact, the instruments of jazz have changed very little in recent decades.  But all the other kinds of technologies have been transformed dramatically.

Technology has changed everything that’s taking place surrounding the music.  Not just how it is played, but even more how it is produced, disseminated, marketed, sold and heard.  Few jazz musicians are prepared for these changes—which present both opportunities and risks.  You can know your horn inside and out, but will find your career prospects severely limited if you don’t understand and address this new state of affairs.

What distinguishes your jazz history from other books on the subject?

I’ve aimed to write something that is more than a dry textbook, but tells the story of the music in a vivid, thought-provoking way.  I don’t hide my enthusiasm for jazz—I know that many readers see this as a key characteristic of my writing.  I am deeply committed to the subjects I write about, and readers can sense that.  By the same token, I try to be much more than a fan.  I take seriously the social ramifications and economic realities of jazz.  I aim to be hard-hitting but also scrupulously honest and fair-minded.  Above all, I try to communicate why this music is worth studying, worth hearing.

How much has changed in your new edition of The History of Jazz?

The most obvious changes relate to my coverage of the last 15 years.  I’ve been able to add material on musicians and issues that have come to the fore during this period. Dozens of artist who weren’t included in the last edition are now dealt with, such as Jason Moran, Diana Krall, Brad Mehldau, James Carter, Matthew Shipp, Nora Jones, The Bad Plus, Jamie Cullum, Darcy James Argue, Vijay Iyer and many others.   I address a host of pressing issues, such as the institutionalization of jazz via organizations such as Jazz at Lincoln Center and the infiltration of jazz into the academic world.  I also devote considerable attention to the remarkable globalization of jazz and the shifting styles of recent years.

In addition, I went back to the earlier sections of the original book, and updated them based on new information and my own on-going research.  I literally went through the 1997 version of the book sentence by sentence, paragraph by paragraph.  I reevaluated all of my earlier judgments, added new material as relevant, and made lots of improvements, small and large, to the original text.  I also updated and expanded the recommended listening guide—which I know, from emails and letters, is one of the most frequently consulted parts of the work.

Ted Gioia is a musician, author, and leading jazz critic and expert on American music. The first edition of his The History of Jazz was selected as one of the twenty best books of the year in The Washington Post, and was chosen as a notable book of the year in The New York Times. He is also the author of Delta Blues, West Coast Jazz, Work Songs and The Birth (and Death) of the Cool.