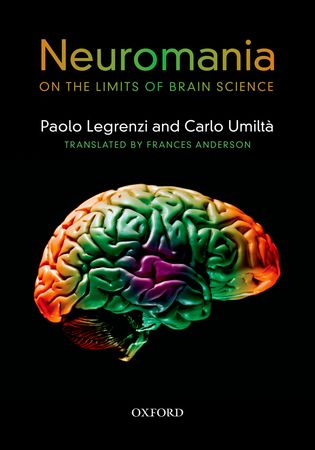 The media are full of news items featuring colour photographs of the brain, showing us the precise location in which a certain thought or emotion, or even love itself, occurs. This leads us to believe that we can directly observe the brain at work, and we have ultimately been seduced into believing that any article accompanied by a brain image or two is more reliable and more scientific than one featuring more mundane images. The below excerpt from Neuromania: On the limits of brain science by Paolo Legrenzi and Carlo Umlitá (and translated by Frances Anderson), explains.

Increasingly often, the press offers explanations of human behaviour by drawings, photographs, and graphic descriptions of sections of the brain which show that part of our grey matter that is activated when we think about something or plan an action. We are told that how we behave depends on the functioning of certain neurons. We hear about new disciplines such as neuroeconomics, neuroaesthetics, neuroethics, neuropolitics, neuromarketing, and even neurotheology (over 20,000 results on Google!).

In our opinion this is not a transitory fashion. On the contrary, it may well be just the tip of an iceberg, of which it would be wise to judge the dimensions to avoid a collision and, more specifically, to avoid it opening a huge hole in our boat. The heart of the iceberg was formed long ago, in the eighteenth century, but, as we shall soon see, at that time it was a breath of fresh air.

In the 1950s, it started to assume significant dimensions. In those days, physics dominated the scientific panorama, or at least the imagination of the educated. The discoveries made by physicists revealed that matter is constituted of relatively few elementary particles which combine in many different ways, liberating previously unimaginable sources of energy. It was then that the other sciences, attracted by a paradigm that reduced the complex to the very simple, attempted to find the lowest possible common denominator applicable to their discipline. At the same time, again following the lead of physics, there was a general attempt to compress knowledge into mathematical models. This meant introducing formal analyses, starting from stylized descriptions of each and every phenomenon. Mathematical models were constructed to represent human behaviour as well as the development of natural events.

When we consider the actions of individuals, whether performed in groups or alone – which is in fact the object of psychology – we have a low-level description of what happens, a level we could almost define as material. This is not the level we normally use when considering everyday life – goals, emotions, actions, thoughts – but it is the simplest, as it corresponds to the functioning of our organism, our body.

Looking at the question from this point of view, man (in the sense of human bodies) is without doubt part of nature. This gives substance to the hope that if in the future we are able to conduct a detailed analysis of every part of the human body, we will have a match between the discoveries of experimental psychologists and the results of our investigations of elementary biological mechanisms. Then we will be able to demolish the complexities of daily life behind its myriad appearances, reducing it to an underlying biological reality (whether dealing with heredity, genetics, or the functioning of the brain).

And so the dream from the past would come true: psychology would become part of that mixture of physics and biology which in the modern world provides an explanation of the human body and its natural history. In this light psychology, and probably the social disciplines as well, would at best be ‘provisional’ sciences. The lexicon of everyday life would be quite another matter altogether; probably we will never be completely rid of that ingenuous psychology formed from descriptions of thoughts, wishes, needs. After all, this is also the language adopted by ‘psychological scientists’ outside the walls of their laboratories.

The old dream cherished by a number of psychologists of rescuing the mind from the dominion of the scientific lexicon is a very attractive simplification, and is extremely powerful in its general organization. Today, with the evolution of novel sophisticated technologies and the consequent advances made in the realm of mind-brain relationships, it seems within reach once more, so we should not be surprised that it has managed to invade the media and show business in various ways (for example, the recent rash of films about robots).

Summing up, a single-language, physics-chemistry and biology, will form the key to revealing the mechanisms of all known phenomena, from the movement of the heavenly bodies to the elementary particles, from the world of nature to the social whirl.

Although this is very attractive in its elegance and simplicity, it is in fact an illusion. It just doesn’t work. Why?

Nowadays when everyone has a mobile phone or a computer, or one of these hybrids that are so much the fashion, there is no dearth of examples that explain why reductionism doesn’t work.

You need to make a call from a mobile phone. Unfortunately you don’t have the instruction manual to hand. You try to conjure up a detailed description of how all the elements that make up the mobile phone function, keeping in mind that they are mostly sand, metals, and plastics (i.e. oil). Would this help you to make that phone call? The fact is that there are various levels of description applicable to machines, artefacts, and organisms, some of which are appropriate for certain purposes but not for others.

If you want to make mobile phones you have to know every single detail of the composite parts of the products parts of the product. However, if you just want to make a call from the telephone which is already assembled and ready for use, then all you need to know are the basics of its software, which are explained in the instruction manual. This is the level that psychology is now able to explain after a century of study of the ‘software’ supplied by the process of natural evolution. This software has been laboriously reconstructed, step by step, inventing experiments to supply clues as to how the human mind works. It was, and is, a complex task.

There is of course a significant difference between mobile phones and humans. Man designs and produces mobile phones but he did not design himself. We build robots, claiming that they run on software similar to the human mind, and that we can interact with them through the same programs that determine thoughts and emotions. However, the robotic hardware was constructed by man, manipulating the inert substances of a computer’s component parts. Man, on the contrary, is the product of natural evolution, developing almost imperceptibly over millions of years, a fact which makes it difficult to reconstruct his natural history a priori as this would require working backwards. Having said that, however, amazing steps forward (or should we say backwards?) have been made in recent years using biological techniques. It is like trying to understand what has happened in an epic movie from the final scenes. The beginning and the central part of the plot are lost. Have you seen Ridley Scott’s Blade Runner (1982), a forerunner of the cyberpunk genre, or Steven Spielberg’s ET (1982), a film that established a box-office record? The success of these films ought to have facilitated the assimilation of the concept that the ‘software’ of life is independent of the material of which the living body is composed, but actually they probably produced the opposite effect. In fact, the idea of man as a machine has taken root in the social imagination, based on the concept that even bodies constructed in the most diverse ways can love and be loved.

Paolo Legranzi is Profesor of Cognitive Psychology at Ca’Foscari University, Venice, Italy. Carlo Umlitá teachs neuropsychology at the University of Padua, Italy, where he directs the Galilean School of Higher Studies.