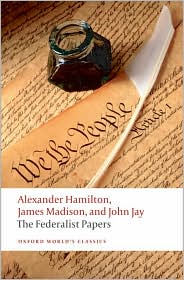 Today would be the 260th birthday of the 4th American president, James Madison. Long honored as the “Father of the Constitution” for his role at the Federal Convention of 1787, Madison is also regarded as the most thoughtful and creative constitutional theorist of his generation. This reputation owes much to his celebrated contributions to The Federalist, the set of essays that he wrote with Alexander Hamilton and John Jay in support of the Constitution. Two of these essays, the 10th and 51st, are widely viewed as paradigmatic statements of the general theory of the Constitution. Some time ago on OUPblog, Lawrence Goldman explained how reading The Federalist Papers can further an understanding of present-day America.

Madison’s political career during nearly half a century is interesting for the way in which it combined deep reflection about constitutional principles with the exigencies of public life. To celebrate his birthday, I’ve gathered some quotes from The Federalist Papers, and a few others I found scattered amongst the pages of the Oxford Dictionary of American Quotations (2nd ed, 2005) and the Oxford Dictionary of Quotations (7th ed, 2009).

“Liberty is to faction what air is to fire, an aliment without which it instantly expires. But it could not be less folly to abolish liberty, which is essential to political life, because it nourishes faction than it would be to wish the annihilation of air, which is essential to animal life, because it imparts to fire its destructive agency.” – The Federalist, no. 10

“If men were angels, no government would be necessary.” – The Federalist, no. 51

“I believe there are more instances of the abridgement of freedom of the people by gradual and silent encroachments of those in power than by violent and sudden usurpations.” – speech in Virginia Convention, 16 June 1788

“The class of citizens who provide at once their own food and their own raiment, may be viewed as the most truly independent and happy.” – ‘Republican Distribution of Citizens’ in National Gazette 5 March 1792, in R. Ketcham (ed.) Selected Writings of James Madison (2006)

“No nation could preserve its freedom in the midst of continual warfare.” – Political Observations [pamphlet published in Philadelphia] 20 April 1795, in R. Ketcham (ed.) Selected Writings of James Madison (2006)

“The advancement and diffusion of knowledge…is the only guardian of true liberty.” – letter to George Thomson, 30 June 1825, Letters and other Writings of James Madison (1865) vol. 3

“So strong is the propensity of mankind to fall into mutual animosities, that where no substantial occasion presents itself, the most frivolous and fanciful distinctions have been sufficient to kindle their unfriendly passions and excite their most violent conflicts. But the most common and durable source of factions has been the various and unequal distribution of property.” – The Federalist, no. 10

“As long as the reason of man continues fallible, and he is at liberty to exercise it, different opinions will be formed.” – The Federalist, no. 10

“The most common and durable source of factions has been the various and unequal distribution of property.” – The Federalist, no. 10