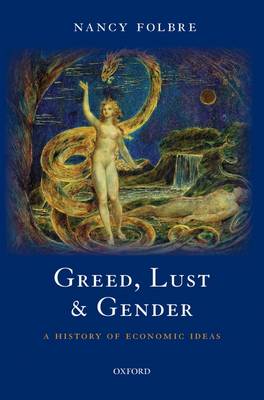 Greed, Lust and Gender: A History of Economic Ideas by Nancy Folbre describes a spiralling process of economic and cultural change in Britain, the US, and France since the 18th century that shaped both the evolution of patriarchal capitalism and the larger relationship between production and reproduction. In this short excerpt from the first chapter of the book, Folbre explains the notion of patriarchal feudalism.

The historical record is complicated by fierce debates over how the transition to capitalism should be defined and when it actually took place—for men. Attention to changing relationships between men and women has been tenuous and intermittent. Still, recent research details the patriarchal aspects of Western Europe’s feudal economies, providing a picture of precapitalist—or at least largely non-capitalist—societies inconsistent with the rosy picture painted by many of capitalism’s strongest critics.

Patriarchal feudalism could be described as a set of implicit exchanges in which the subordinated parties (whether serfs, women, or children) received protection and security in return for working long hours in the service of their superiors—relations between lords and serfs have been described in these amicable terms. But these exchanges were enforced by threat of violence as well as weight of political and military power. A variety of collective interests were at work: lords benefited from the extraction of labor dues from serfs; men benefited from a division of labor that assigned women the least remunerative forms of work; and parents benefited from their children’s labor and support.

None of these relationships left much scope for individual choice. Feudal lords, for the most part, inherited their land and privilege. Men, having chosen a wife, were legally bound for life. Parents, having borne their children, could not exchange them for a new set. The relative permanence of these social relations made the strong at least somewhat dependent upon the weak; oppression implied at least some obligation. Secular hierarchies the eye of the needle were modeled upon religious principles. The power and the glory of the heavenly Father were metaphorically shared by the lord, and on a smaller scale, the male head of household.

The internal organization of the lowest level of society, the peasant family, replicated the hierarchical organization of the whole. Its divergent individual interests were coordinated in part by a cosmology that urged solidarity among true believers. The Church mobilized significant quantities of wealth partly by promising salvation in return. Religious precepts also reinforced the authority of men over their wives and children, enhancing incentives to high fertility within marriage. The exclusion of women from access to education within the church or to apprenticeships in trade or commerce constricted their alternatives to marriage. Only relatively wealthy families could place their daughters in convents and nunneries. Within marriage, women had no right to refuse intercourse or to avert conception. The resulting pressures created what twentieth century demographers would call ‘‘coercive pronatalism’’.

Western Europe enjoyed geographical advantages that were conducive to the rapid spread of agricultural innovation. Its political diversity left room for healthy competition among emerging nation-states. But patriarchal religious doctrines also played a role, encouraging high birth rates and sanctions against infanticide that probably contributed to demographic expansion. The brutal repression of women through witchcraft trials may have been intensified by economic insecurities, but it served patriarchal interests more directly than the interests of any nascent capitalist class.

Sustained levels of high fertility in Europe contributed to slow but persistent population growth, interrupted and reversed by recurrent plagues such as the Black Death of the fourteenth century. In some areas at some times, population pressure contributed to economic stress, even famine. But over the long term, it encouraged technical innovation and increased the density of settlements, promoting commerce. In Northwestern Europe, a distinctive pattern of delayed marriage came into play: Parents pressured their children to marry at a later date, or not to marry at all, a factor that probably contributed to the gradual empowerment of women. In sum, patriarchal power influenced family formation and fertility, which, in turn, influenced patriarchal power.

Rescuing capitalism from itself