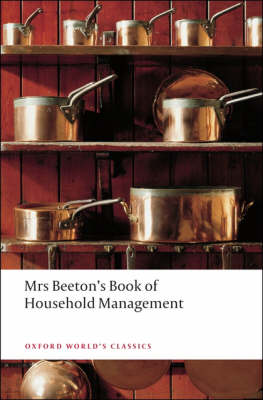 BBC 2 has rediscovered Mrs Beeton, with Sophie Dahl tramping the streets of Cheapside and Epsom looking for the real woman behind Household Management. It is worth the shoe leather – Mrs Beeton’s is certainly a story well worth telling. The author of the most famous cook book ever published began work on it at the age of twenty-one and finished it at four years later. Her book was first published in volume form in 1861 and has never been out of print since. Isabella herself died seven years after its publication of puerperal fever, contracted during the birth of her fourth child. She was 28.

The crisp, authoritative tones of her book, along with its immense size and heft, and the range and assurance of its advice have all encouraged generations of readers to imagine Mrs Beeton as a stately matron, doling out the fruits of long years of domestic experience. It is a model of the author deliberately encouraged by Ward Lock, the book’s long-term publishers, who tacitly avoided all mention of the author’s untimely death. In fact the real Isabella Beeton was the polar opposite of what we would expect. She had spent much of her adolescence living with her siblings in the grandstand on Epsom race course, where her step-father was Clerk of the Course. They slept in the committee rooms and ran wild, while Isabella, the eldest, presided over the ramshackle domestic arrangements. She followed this highly unconventional upbringing by taking herself off to learn pastry-making in Germany – conduct, according to one of her sisters, that was considered ‘ultra-modern and not quite nice’. On her return she became engaged to a young entrepreneurial publisher, Sam Beeton. For the rest of their brief married life she was to work alongside him, contributing to his publications. She wrote columns on fashion and travelled to Paris with great enjoyment to report on the fashion shows, she translated French novels for serialisation, and wrote on food and household management for the Englishwoman’s Domestic Magazine. It was these that formed the basis of the book.

Mrs Beeton gets rediscovered every generation: there was a huge stir in the 1930s when her son, Sir Mayson Beeton, presented a picture of his mother to the National Portrait Gallery and people tried to reconcile the fashionable young girl of the picture with the mature woman of their imaginings. In the 1970s, when traditional English food enjoyed a renaissance, there was again a new surge of interest in Beeton and her book. And in the last decade there have been flurries of media enthusiasm in reponse to Kathryn Hughes’s 2005 biography (The Short Life and Long Times of Mrs Beeton) and to my own edition of her work for Oxford World’s Classics. When the latter appeared in 2000 I was astonished by the degree of interest the book received on national and local radio, in broadsheets and tabloids alike. It was even the subject of a Mark Rowson cartoon in The Independent. The curiosity was two-fold: it was news-worthy because a highly respected literary series was allowing a cook book to join the hallowed ranks of serious literature, but there was also a lot of interest in the book and its author: in the oddities of Isabella’s story and in the anomolous cultural status the book possesses, as something both immensely famous and largely unread.

So why is it worth us reading Beeton’s book today? For one thing, it is a record of a society caught at a crucial moment of transition. It tells of a culture caught between the old world and the new, poised between modernity and nostalgia. Of kitchens where meat is still roasted on spits over open fires, but which contain many of commerical bottled sauces and condiments we take for granted today. Its medical chapters offer instructions for the application of leeches alongside advice about vaccination. It spoke to a generation of newly-urban middle-class women whose lives were very different from those of their mothers and grandmothers, who needed detailed advice on everything – from buying the latest fashions to how to choose a trustworthy shop-keeper, from how to manage servants to how to plan a dinner party – precisely because all those things were new. They were also rather scary: just under the surface in Beeton’s book lurk the manifold fears of her readers: worries about the morals of the servants they employed, the purity of the food they bought, the harsh judgements of their neighbours, the possibility of losing their tenuously-secured social status. But the book also speaks to their hopes and dreams: the satisfaction of running a houshold just so, of exercising control over your own domain, of securing your social place with the perfect dinner party, of the dizzying possibility that one day you might be successful enough to employ a butler, or to serve truffles with champagne.

Above all, the book was so immensely successful because Isabella knew her readers. She might not have been as much one of them as she implies, but she understood absolutely the gap between what Victorian middle-class culture said about itself and what was really true – and she bridged this gap with great facility. Most middle-class households could not afford enough servants to perform all the domestic tasks, and yet the mythology of the leisured mistress of the house had taken hold. Isabella flatters the reader with high-flown literary quotation and advice about fashion and social calls, while at the same time giving her the information that will allow her to both perform her domestic tasks efficiently and hide the fact that she is doing so. Her book reveals both the extraordinary energy and the substantial paranoia of the mid-Victorian middle class: her book – like all cook books – is about much more than just cooking.

Nicola Humble is a Professor of English Literature at Roehampton University, and the editor of the Oxford World’s Classics edition of Mrs Beeton’s Book of Household Management. She is also the author of Culinary Pleasures, which won the Best Food Book of the Year Award in 2006, Cake: A Global History, and The Feminine Middlebrow Novel, 1920s to 1950s: Class, Domesticity and Bohemianism.