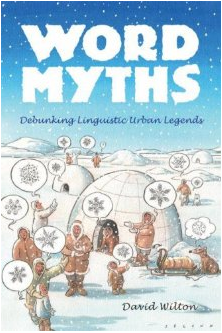 
Having just moved to Toronto, Ontario from Berkeley, California, one thing that is on my mind, as well as on my front yard, is snow. Crunching through the drifts on my way to the subway, or when I walk my dog Dexter, gives me a lot of time to contemplate the unfamiliar white stuff. One of those thoughts is how familiarity with snow figures into one of the more persistent false beliefs about language—the one that says, “Eskimos have X number of words for snow,” with X being a number ranging from several dozen to as many as four hundred. What makes this myth interesting isn’t that it is false and persistent—there are lots of those beliefs, from the innocuous “elephants are afraid of mice” to the insidious “President Obama was born in Kenya”—rather, this myth is interesting because it plays into misunderstandings about language and the workings of the mind.

First some facts. Eskimo, or more accurately the Yupik and Inuit–Inupiaq families of languages, have a handful of words for snow, ranging from estimates as low as two to a high of a dozen or so. That’s about the same number that can be found in English (snow, sleet, flurry, blizzard, slush, powder, etc.). So actually, Yupik and Inuit are not remarkable in the number of words they have for snow.

Part of the reason for the varying numbers is in defining exactly what we mean by word. (Is “snowdrift” one word or two?) Any two counts of the number of different words in anything will vary, sometimes wildly, depending on how the counting is done. Making this problem worse is the fact that Yupik and Inuit are agglutinative languages with many compounded forms, so a small number of roots can seem like a lot of different words. For example, the West Greenlandic word siku, or “sea ice,” is used as the root for sikursuit, “pack ice,” sikuliaq, “new ice,” sikuaq, “thin ice,” and sikurluk, “melting ice.” Note that for each of these examples, the English equivalent is expressed as a simple noun phrase instead of as a compound noun. English speakers can still easily express the concept, even if they don’t use a single word to do so.

But even if Yupik and Inuit had a large number of root words for snow, would this tell us anything interesting? The answer is no. For one thing, large vocabularies in specialized fields are not unusual. My dog Dexter is a beagle, but he could just as well be one of several hundred named breeds, from Affenpinscher to Zapadno-Sibirskaia Laika. Or think of the number of different types of saw: crosscut, band, circular, hack, rip, jig, saber, etc. Almost any specialized field develops long lists of such hyponyms, and if the Inuit did have a large number of words for snow it wouldn’t tell us anything interesting about them or their language.

But people seem to think that it does and that their language gives the Inuit a special ability to distinguish between various types of snow. There is even a best-selling mystery novel and movie, Smilla’s Sense of Snow, which features this supposed ability. Does our ability, or lack thereof, to express something in words affect our ability to think about it? In a 1940 article, linguist Benjamin Whorf proposed that it does, and he was the first to use the example of Eskimo words for snow. (And Whorf too was uncertain about the number, at one point saying there were three and at another hinting there were at least seven.) Perhaps the best-known example of language influencing thought is in George Orwell‘s novel 1984, in which one of the goals of the language Newspeak is to make it impossible to think a politically incorrect thought by eliminating all words that make such thought possible.

But of course, Smilla’s Sense of Snow and 1984 are both fiction. Is there any scientific evidence that Whorf’s hypothesis is true? The answer is again no, at least not as depicted in these fictional examples. It has been shown that having a word for something makes it easier to memorize or categorize it. For example, someone with a name for a particular color will be more likely to remember that they saw that shade than one for which they don’t have a name. Or they can distinguish it from similar shades faster than someone who does not know the name, but that second person will still be able to distinguish the shade. It’s not as if people become color-blind to hues they don’t have words for. This effect is used to an advantage by politicians. Americans, for instance, are more likely to categorize an estate tax as politically acceptable, while decrying a death tax, although they are the same thing.

An example from the other side of the globe

Guy Deutscher, in his recent book Through the Language Glass, describes the Guugu Yimithirr people of Australia, who have no words for right or left. Instead, they give directions using cardinal directions, north, south, east, and west. A Guugu Yimithirr speaker will not only tell you to drive five miles north, as one might in English, but will also ask you to scoot a few inches to the southwest, instead of “to the right,” so he has room to sit down. As a result the Guugu Yimithirr tend to be hyper-aware of their position relative to the points of the compass. They are continually and unconsciously updating their internal compasses. English speakers can learn to do this too; it’s just that we don’t practice the ability, so the ability is not as keenly developed in us. And the converse is true: Guugu Yimithirr people can quickly pick up the concepts of right and left. The language we use doesn’t prevent us from thinking certain thoughts, but it can make thinking in certain modes habitual and faster, and it can cause us to superficially associate ideas with related concepts that use similar words.

One positive thing has come out of the Eskimo-words-for-snow myth, the concept of the snowclone. That’s the name bestowed on timeworn phrases in which certain elements are varied, like “if Eskimos have N words for snow, then X must have Y words for Z,” as in “if Eskimos have 400 words for snow, then Santa Cruzans must have 500 for surf;” “X is the new Y,” as in “pink is the new black;” or “in space no one can hear you X,” as in “in space no one can hear you ask for bail” (the original was “scream,” the tag line for the 1979 movie Alien). The term snowclone was coined in 2004 by blogger Glen Whitman at the prompting of linguist Geoffrey Pullum.

I deal with Eskimo words for snow, and other language myths, at greater length in Word Myths: Debunking Urban Legends. The subject is also addressed in Geoffrey Pullum’s book The Great Eskimo Vocabulary Hoax and in Stephen Pinker’s The Language Instinct. And you can also find the original debunking of this myth in Laura Martin’s article “Eskimo Words for Snow: A Case Study in the Genesis and Decay of an Anthropological Example” in American Anthropologist, vol. 88, no. 2, June 1986. Whorf’s original article, “Science and Linguistics,” is in MIT’s Technology Review, vol. 42, no. 6, April 1940.

Dave Wilton is editor of the website wordorigins.org, and the author of Word Myths: Debunking Urban Legends. This article originally appeared on the Oxford Words blog.

Do you know the hidden histories of these words? [Quiz]

Do you know how these words were coined? [Quiz]