Everybody knows that a noun is the name of a person, place, or thing. It’s one of those undeniable facts of daily life, a fact we seldom question until we meet up with a case that doesn’t quite fit the way we’re used to viewing things.

That’s exactly what happened to a student in Ohio when his English teacher decided to play the noun game. To the teacher, the noun game seemed a fun way to take the drudgery out of grammar. To the student it forced a metaphysical crisis. To me it shows what happens when cultures clash and children get lost in the tyranny of school. That’s a lot to get from a grammar game.

Anyway, here’s how you play. Every student gets a set of cards with nouns written on them. At the front of the classroom are three buckets, labeled “person,” “place,” and “thing.” The students take turns sorting their cards into the appropriate buckets. “Book” goes in the thing bucket. “city” goes in the place bucket. “Gandhi” goes in the person bucket.

Ganesh had a card with “horse” on it. Ganesh isn’t his real name, by the way. It’s actually my cousin’s name, so I’m going to use it here.

You might guess from his name that Ganesh is South Asian. In India, where he had been in school before coming to Ohio, Ganesh was taught that a noun named a person, place, thing, or animal. If he played the noun game in India he’d have four buckets and there would be no problem deciding what to do with “horse.” But in Ohio Ganesh had only three buckets, and it wasn’t clear to him which one he should put “horse” in. 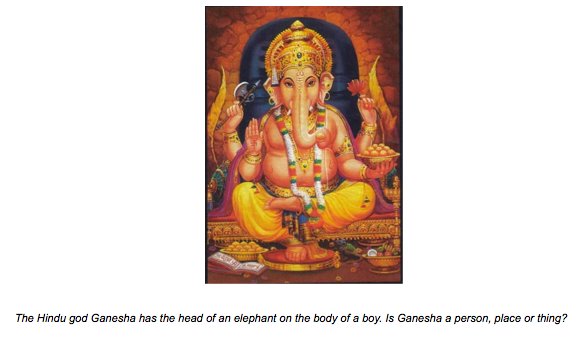 In India, Ganesh’s religion taught him that all forms of life are continuous, interrelated parts of the universal plan. So when he surveyed the three buckets it never occurred to him that a horse, a living creature, could be a thing. He knew that horses weren’t people, but they had more in common with people than with places or things. Forced to choose, Ganesh put the horse card in the person bucket.

Blapp! Wrong! You lose. The teacher shook her head, and Ganesh sat down, mortified, with a C for his efforts. This was a game where you got a grade, and a C for a child from a South Asian family of overachievers is a disgrace. So his parents went to talk to the teacher.

It so happens that I’ve been in a similar situation. We spent a year in France some time back, and my oldest daughter did sixth grade in a French school. The teacher asked her, “How many continents are there?” and she replied, as she had been taught in the good old U.S. of A., “seven.” Blaap! Wrong! It turns out that in France there are only five.

So old dad goes to talk to the teacher about this. I may not be able to remember the seven dwarfs, but I rattled off Europe, Asia, Africa, Australia, Antarctica, North America, and South America. The teacher calmly walked me over to the map of the world. Couldn’t I see that Antarctica was an uninhabited island? And couldn’t I see that North and South America were connected? Any fool could see as much.

At that point I decided not to press the observation that Europe and Asia were also connected. Some things are not worth fighting for when you’re fighting your child’s teacher.

Anyway, let’s get back to nouns. School grammar texts typically divide nouns into person, place, or thing. More advanced grammars separate nouns into animates and inanimates, or abstracts and concretes, or mass nouns and count nouns, and they further complicate matters by including phrases, clauses, and entire sentences that aren’t actually nouns but nominals that function like nouns. None of this lends itself to buckets, and none of these systems specifically mentions animals. In English, though, animals can clearly be things: “The dog is hungry. Feed it.” 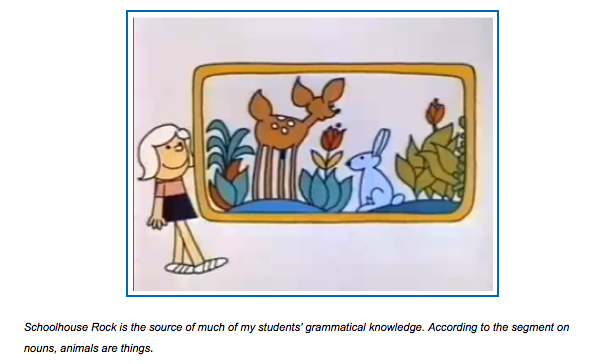 However, animals can also be persons: “Babar became king of the elephants when the old king ate a poisoned mushroom and died.” They can even be ideas, like the Cheshire cat in “Alice,” or the Loch Ness monster: they’re not real, so they must be ideas. I guess an animal can’t very well be a place, but I’m sure some reader will attack me for placism, arguing yes, it can.

Babar, king of the elephants, bears an uncanny resemblance to Ganesh, the elephant god. Is Babar a person, place or thing? According to the French Wikipedia, a noun is “a thing or idea by itself.” But in French schools, it doesn’t matter whether Babar is a thing or an idea, so long as you use the correct gender of the definite article: le roi Babar, not *la roi Babar.

But that’s not the point, is it? The point is that lots of nouns don’t fit neatly into noun buckets. What is East? Is it a place or an idea? Can it exist without West? Or North and South? Calling nouns persons, places, things, ideas, or even animals, is a way to help students recognize nouns when they stumble upon them. It is not meant to limit the imagination or categorize every possible noun the mind can come up with. Anyone looking at all closely at language must see that its categories are suggestive, permeable, inconclusive. As linguists like to say, all grammars leak. Some teachers find this indeterminacy uncomfortable.

Is the point of the noun game to see whether students recoginze possible nouns as nouns, or whether their view of the universe agrees with the teacher’s? Is education fitting things into buckets, or wondering why the categories don’t fit the facts? Does education consist of grading you on how well you can play a game? 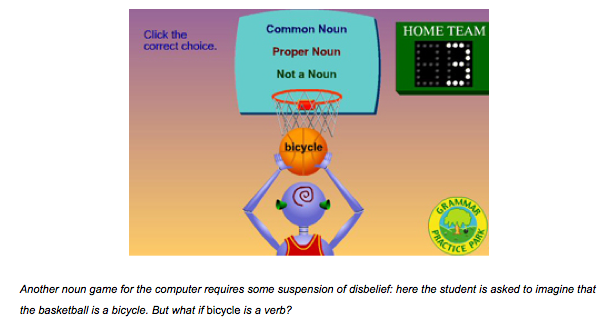 So what do I advise Ganesh’s parents to do? Forget it, that’s what. Ganesh has done more thinking about the nature of language than his teacher has. His performance in the noun game won’t keep him out of Harvard, or Ohio State. The teacher isn’t going to change. The grade is not important. It’s the thought, not the noun, that counts.

This commentary is based on an actual incident that occurred more than a decade ago. An anxious parent called the National Council of Teachers of English for advice, and I responded with an earlier version of this essay that appeared in “Inflections” (vol. 2, no. 1, 1994), a Council newsletter. The parent, who received a copy of that response, discussed the issue with the school principal, who was moved to schedule a schoolwide assembly to increase awareness of cultural diversity among students and teachers. I have no idea whether teachers at that school still prefer teaching grammar as a set of testable formulas instead of a way to explore the complexities of language.

Dennis Baron is Professor of English and Linguistics at the University of Illinois. His book, A Better Pencil: Readers, Writers, and the Digital Revolution, looks at the evolution of communication technology, from pencils to pixels. You can view his previous OUPblog posts here or read more on his personal site,  The Web of Language, where this article originally appeared.

Five things you need to know about pronouns